State Service: Many appeals received from Azerbaijani citizens, who want to go to battle 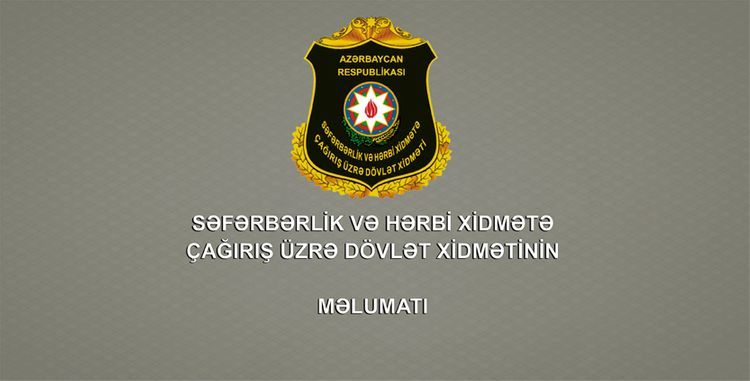 Armenian Armed Forces committed large scale provocation along the frontline at about 06:00 a.m on September 27 and intensively shelled positions of the Azerbaijani Army and residential settlements through large caliber weapons, mortars, and different caliber artillery, State Service for Mobilization and Conscription of Azerbaijan told APA.

Apparatus, local department, and units of the Service are receiving appeals of many Azerbaijani citizens, who want to go and fight in the frontline voluntarily and deliver necessary assistance regarding provocations of Armenian Armed Forces.

"We should remind that the recruitment of citizens is carried out in accordance with relevant normative legal acts.

State Service for Mobilization and Conscription of Azerbaijan expresses gratitude to our citizens, who consider defense of Homeland as its moral duty, besides legally-determined duty, for their high patriotism.

Currently, Azerbaijan's Armed Forces have been completed in accordance with requirements of legislation. Defense of territorial integrity of the Republic of Azerbaijan is provided with the Azerbaijani Army.

That is why State Service for Mobilization and Conscription of Azerbaijan noted that military servicemen in reserve will be called to local structure units of the Service and involved in relevant measures, aimed at provision of state security, in accordance with requirements of legislation, if there is a necessity. However, today there is not a ground for the necessity", noted in the information.