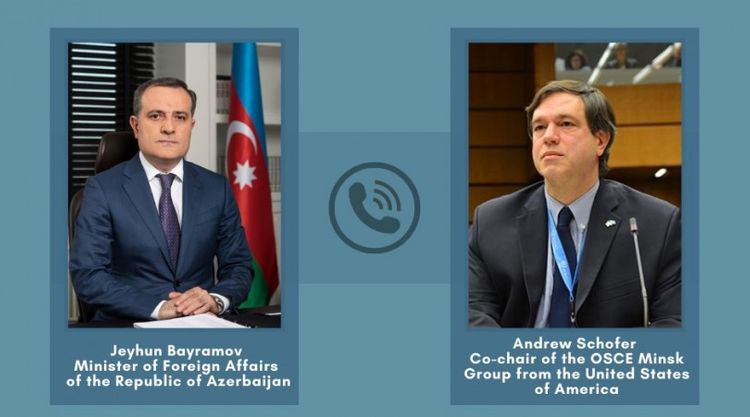 On October 11, 2020, on the initiative of the Azerbaijani side, a telephone conversation took place between Minister Jeyhun Bayramov and OSCE Minsk Group co-chair of the US Andrew Schofer, APA reports quoting the Press Service Department of the Ministry of Foreign Affairs of the Republic of Azerbaijan.

Minister Jeyhun Bayramov informed the other side on Armenia’s deliberate shelling the Azerbaijani civilians and civilian objects even after the humanitarian ceasefire was reached. Minister draw the attention of his interlocutor to the attempted attack of the Armenian armed forces in the direction of Hadrut and Jabrayil a few hours after the establishment of the humanitarian ceasefire, the shooting by the Armenian armed forces of a sanitary vehicle, clearly marked with a white flag, collecting the bodies of Armenian soldiers and shelling of Ganja, the second largest city in Azerbaijan and far beyond the frontline, with rocket fire by the Armenian armed forces. The other side was informed of the killed and injured civilians as a result of the shelling.

The US co-chair of the OSCE Minsk Group, Andrew Schofer, noted that it is deeply concerning to observe the continuation of the tensions in the region even after a humanitarian ceasefire was reached, and stressed the importance of political dialogue in resolving the issue.