Tural Ganjaliyev: "We will witness how Armenia sustains even more blows" 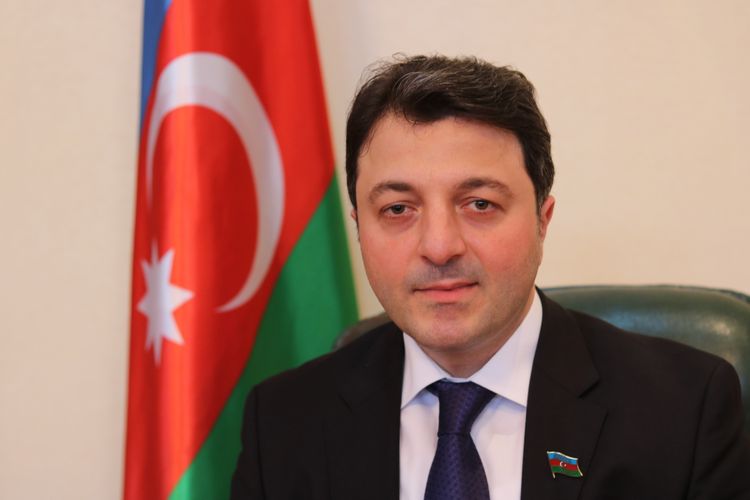 “The ideas mentioned in the joint statement of the rapporteur of the European Parliament (EP) for Azerbaijan Zhelena Zavko, the EP rapporteur for Armenia Traian Basescu and the co-chairman of the EP Parliamentary Cooperation Committee for Azerbaijan, Georgia and Armenia Maria Kalyurand regarding the construction of the new trunk highway that will connect Armenia and Nagorno Garabagh should be evaluated as a serious warning to the Armenian government”, the head of the Azerbaijani community of Azerbaijan’s Nagorno Garabagh region, the deputy of the Azerbaijani Parliament Tural Ganjaliyev told APA.

Tural Ganjaliyev named the aforementioned statement as a positive document and noted that this will give impetus to the strengthening of Azerbaijan’s position on the international arena: “If we analyze this statement then we will see that Armenia’s illegal activity on Azerbaijan’s occupied territories is closely tracked. The reflection in the statement of the appeal for the solution of Armenia-Azerbaijan conflict just in the framework of Azerbaijan’s internationally recognized borders, adoption of the decision on construction of the aforementioned trunk highway without the approval of Azerbaijan’s authorized agencies and an indication of this as a violation of the international law, the potential of this step to symbolically cover the illegal occupation of Nagorno Garabagh and the adjacent regions and the indication that this will not help to create a trust, peace and reconciliation environment reveal the Armenian government’s non-constructive position in a solution of the conflict”.

Head of Community has talked on meetings, held with authors of the statement at the end of last year: “We had very useful meetings with authors of the statement Romania’s former President, Rapporteur of the European Parliament on Armenia Traian Basescu, Former Foreign Minister of Estonia, co-chair of the EP Parliamentary Cooperation Committee for Azerbaijan, Georgia and Armenia, Maria Kaljurand during our visit to Brussels with Community members at the end of the previous year. We brought the position of the Azerbaijani Community of Nagorno Garabagh region regarding the solution of the Armenia-Azerbaijan conflict to the attention of these persons during the meetings. We said that due to the non-constructive position of the Armenian side, the conflict has not been solved for many years and internally-displaced Azerbaijanis can not return to their native lands.”

The Deputy noted Armenia has tried to deceive international organizations by different tools: “Unfortunately, it has been achieved in some cases. However, in the current situation, Armenia’s lies are exposed as a result of the successful foreign policy of Azerbaijani authority. I think the process will be lasting and we will witness how Armenia sustains even more blows.”