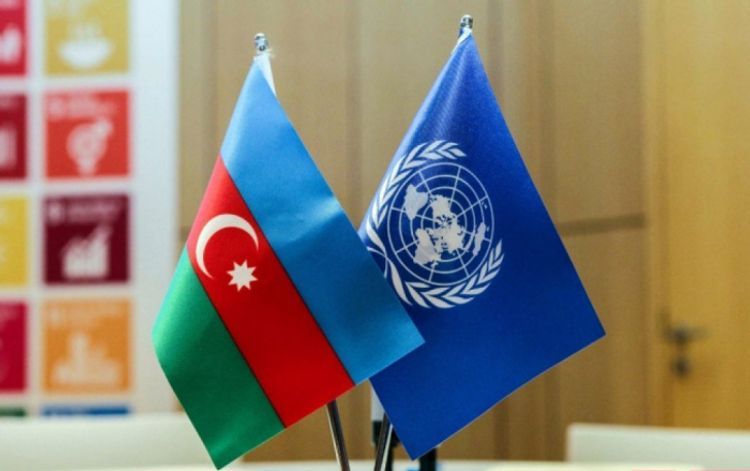 The UN General Assembly has adopted 8 resolutions regarding the missing persons by the initiative of the Azerbaijani side from 2004 up to now, reads the letter addressed by the head of the Permanent Representation of Azerbaijan to the UN Yashar Aliyev to the UN Secretary-General, APA reports.

The letter reads: "Since 2004, on the initiative of Azerbaijan, the General Assembly has adopted eight resolutions entitled “Missing persons”, reaffirming the obligations under international humanitarian law with regard to missing persons and calling upon States parties to an armed conflict to take all appropriate measures to prevent enforced disappearances in connection with armed conflict and to account for persons reported missing as a result of such a situation.

On 11 June 2019, the Security Council unanimously adopted resolution 2474 (2019) on missing persons, its first-ever resolution on this topic, in which it reaffirmed its strong condemnation of the deliberate targeting of civilians or other protected persons in situations of armed conflict and called upon all parties to armed conflict to put an end to such practices, in accordance with their obligations under international humanitarian law. Other provisions included calling upon the parties to armed conflict to take all appropriate measures to prevent persons from going missing in connection with armed conflict and to facilitate family reunions and ensure impartial and effective investigations and prosecution of offenses linked to missing persons as a result of armed conflict with a view to full accountability.

In his latest report on the protection of civilians in armed conflict, the SecretaryGeneral placed a particular focus on the ongoing tragedy of missing persons, pointing out the following: International humanitarian and international human rights law prohibits enforced disappearance. Under international humanitarian law, parties are required to prevent persons from going missing and to take all feasible measures to account for those reported missing as a result of armed conflict. International humanitarian law also provides for the right of families to receive information on the fate and whereabouts of their missing relatives and requires States to investigate alleged war crimes, some of which may include violations that led to people going missing, including cases of enforced disappearance.

It is critically important that the Security Council, the General Assembly, the Secretariat and the relevant organs and mechanisms of the United Nations consistently maintain their focus on the protection of civilians affected by armed conflicts and systematically reiterate the demand that parties to armed conflict comply fully with their obligations under international humanitarian law, including in relation to missing persons. As is known, the continuing aggression by Armenia against Azerbaijan has led to the temporary occupation of a significant part of Azerbaijan’s territory, including the Nagorno-Karabakh region, the seven adjacent districts, and some exclaves.

The war has claimed the lives of tens of thousands of people, ruined cities, and livelihoods in my country and resulted in the forcible expulsion of more than 1 million Azerbaijanis from their homes and properties. Serious violations of international humanitarian law amounting to war crimes, crimes against humanity and acts of genocide were committed by the Armenian armed forces in the course of the aggression.

The recently published comprehensive report on war crimes in the occupied territories of Azerbaijan and Armenia’s responsibility provides convincing evidence as to the range, variety and consistency of Armenia’s commission of multiple war crimes, including those relating to civilian deaths or injuries; civilian property; the mistreatment of detainees and prisoners of war; the taking of hostages; ethnic cleansing, forced displacement and changing the character of the occupied territory; the destruction of cultural heritage; and damage to the natural environment.

Some of the offenses examined in the report amount to the crime of genocide, as ethnic Azerbaijanis have been targeted because of their nationality and/or ethnicity, and the relevant intent has been to destroy the group in part. 3 As at the beginning of 2020, 3,889 citizens of Azerbaijan were registered as missing as a result of the conflict, including 719 civilians. Among the civilians, 71 are children, 267 are women and 326 are older persons. It has been established that 871 of the 3,889 missing persons were either taken as prisoners of war or hostages, including 604 servicemen and 267 civilians, of whom 29 are children, 98 are women and 112 are older persons.4 Those reported missing disappeared in circumstances that raise serious concern as to their well-being, particularly given the atrocious methods of warfare widely practiced by the Armenian armed forces during the conflict.

Armenia’s international responsibility involves legal consequences, including the obligation to provide adequate compensation, while individuals responsible for violations with regard to the citizens of Azerbaijan reported missing in connection with the conflict should face penal or other sanctions at the national and international levels. It is important that all States cooperate and undertake necessary efforts in order to bring to an end both such breaches of international law and the impunity enjoyed by their perpetrators. I should be grateful if you would have the present letter circulated as a document of the General Assembly, under agenda items 32, 37, 68, 70, 75 and 83, and of the Security Council."