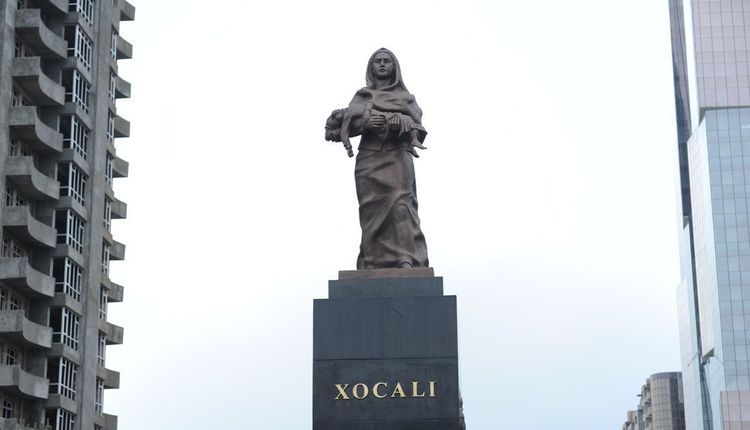 The Ministry of Foreign Affairs and Prosecutor General’s Office of the Republic of Azerbaijan have issued a joint statement.on the 28th anniversary of the Khojaly genocide, Azerbaijani MFA told APA.

February 26, 2020 marks the 28th anniversary of the massacre committed by the Armenian armed forces in Khojaly during Armenia's aggression against Azerbaijan.

As a result of Armenia's ongoing aggression against Azerbaijan, about one-fifth of the Azerbaijani territories, including Nagorno-Karabakh and seven surrounding regions, have been occupied and more than one million ethnic Azerbaijanis living in these areas, as well as in Armenia, have been subjected to ethnic cleansing.

During this aggression, numerous military offenses, crimes against humanity and genocide were committed against the civilian population of Azerbaijan and the Republic of Armenia as the aggressor bears the responsibility for them.

In the course of the war, the capture of Khojaly town was particularly tragic. Before the conflict, 7,000 people lived in this town of the Nagorno-Karabakh region of Azerbaijan. From October 1991, the town was entirely surrounded by the armed forces of Armenia. Over the night of the 25 to 26 February 1992, following massive artillery bombardment of Khojaly, the armed forces of Armenia, with the help of the infantry guards regiment No. 366 of the former USSR, implemented the seizure of Khojaly. Invaders destroyed Khojaly and with particular brutality implemented carnage over its peaceful population.

As a result of the Khojaly genocide 5379 inhabitants of the city were forcefully expelled, 613 people, including 63 children, 106 women and 70 elderly brutally murdered, 8 families were completely destroyed, 487 were injured, 1275 were captured and taken hostage (the fate of 150 of them, including 68 women and 26 children, remains unknown to date). By the occupation of Khojaly damage exceeding 170 million USD has been inflicted to the Government of Azerbaijan and individual nationals.

The overall assessment of the causes and consequences of the war unleashed by the Republic of Armenia against the Republic of Azerbaijan and all existing facts of the tragic events in Khojaly make it absolutely clear that the crimes committed in that town of Azerbaijan were not an isolated or sporadic act, but a part of Armenia’s widespread and systematic policy and practice of atrocities. The intentional slaughter of the civilians in Khojaly was directed at their mass extermination only because they were Azerbaijanis.

The investigation conducted by the Military Prosecutor's Office of the Republic of Azerbaijan has fully proved involvement of a number of military servicemen and other persons in the perpetration of the Khojaly genocide. The investigation made decisions on their accusation according to the articles of the Criminal Code of Azerbaijan on genocide, torture, deportation of the population, violation of international humanitarian law during the armed conflict and other criminal offenses.

As a result of the investigation into the Khojaly genocide episode, around 7,500 investigative actions were conducted regarding more than 4,500 persons, including over 1,800 witnesses and 2699 victims, more than 800 different examinations and other investigations were carried out.

One year after the Khojaly genocide, in 1993, the UN Security Council adopted 4 (822, 853, 874, 884) resolutions condemning the occupation of Azerbaijani territories and affirming respect for the territorial integrity and sovereignty of Azerbaijan, the inviolability of international borders and the inadmissibility of occupation of territories. Thus, in response to the territorial claims and actions of Armenia, the Security Council confirmed that Nagorno-Karabakh was an integral part of Azerbaijan and demanded the immediate, complete and unconditional withdrawal of all occupying forces from the occupied territories of Azerbaijan. This position is reflected in the decisions and resolutions of numerous international organizations.

In its judgment of 22 April 2010, the European Court of Human Rights arrived at an important conclusion with respect to the crime committed in Khojaly, qualifying the behavior of those carrying out the incursion as “acts of particular gravity which may amount to war crimes or crimes against humanity”.

The national legislative bodies of 16 States, as well as the Organization of Islamic Cooperation adopted resolutions and declarations on condemning in strongest terms the massacre of civilian population in Khojaly and recognizing the tragedy of Khojaly as an act of genocide and crime against humanity.

The report “War crimes committed in the occupied territories of Azerbaijan and the responsibility of Armenia”, prepared at the request of the Government of Azerbaijan by the eminent international lawyer Malcolm Shaw was published as the UN General Assembly and the Security Council document on 7 February 2020. The report, which contains the basic facts, historical background, the general framework of international humanitarian law and an analysis of the responsibility of Armenia, examines the war crimes committed by Armenia in the occupied territories of Azerbaijan, including the Khojaly massacre, which is characterized as a crime against humanity and genocide.

In total disregard of the position of the international community, demands of the UN Security Council Resolutions on immediate, unconditional and full withdrawal of occupying forces from the seized lands of Azerbaijan, Armenia continues flagrant violation of international law. It continues to undertake efforts aimed at further consolidating the current status quo of the occupation, strengthening its military build-up in the seized territories, changing their demographic, cultural and physical character and preventing the hundreds of thousands of Azerbaijani forcibly displaced persons from returning to their homes and properties in those areas.

Official Yerevan not only denies its responsibility for the occupation of Azerbaijani territories and military presence in these territories, but even claims that the Khojaly massacre was allegedly committed by Azerbaijanis against their citizens, in this regard referring to an interview with the former President of the Republic of Azerbaijan, Ayaz Mutalibov, to Russian media. A.Mutalibov has repeatedly stated that these references to him are lies and slander, the Khojaly execution was committed by the Armenians.

It is well known that some representatives of the previous leadership of Armenia, together with many other high-ranking political and military officials of that State and leaders of the separatist regime set up by Armenia in the occupied territory of Azerbaijan, personally participated in seizing Azerbaijani lands and in the reprisals against Azerbaijani civilians and militaries, including in Khojaly.

In his cynical admission of culpability, Armenia’s then-Defense Minister and ex-President, Serzh Sargsyan, was quoted by the British journalist Thomas de Waal, as saying, “before Khojali, the Azerbaijanis thought that ... the Armenians were people who could not raise their hand against the civilian population. We were able to break that [stereotype]” (Thomas de Waal, Black Garden: Armenia and Azerbaijan through Peace and War (New York and London, New York University Press, 2003), p. 172).

It is incontrovertible today that no official or political status cloaks the person concerned with immunity for the most serious international crimes, such as war crimes, crimes against humanity, genocide and ethnic cleansing.

Alongside the ongoing prosecution of persons charged with committing various crimes against their own people in Armenia, the trial over the crimes committed by them against the Azerbaijani people is also crucial for the establishment of international justice and can contribute to the settlement of the Armenia-Azerbaijan conflict by peaceful means.

The Republic of Azerbaijan is confident that the consistent measures being taken at the national level, as well as the existing international legal framework, will serve to bring to justice those responsible for the grave offenses committed against the civilian population of Azerbaijan during the conflict.