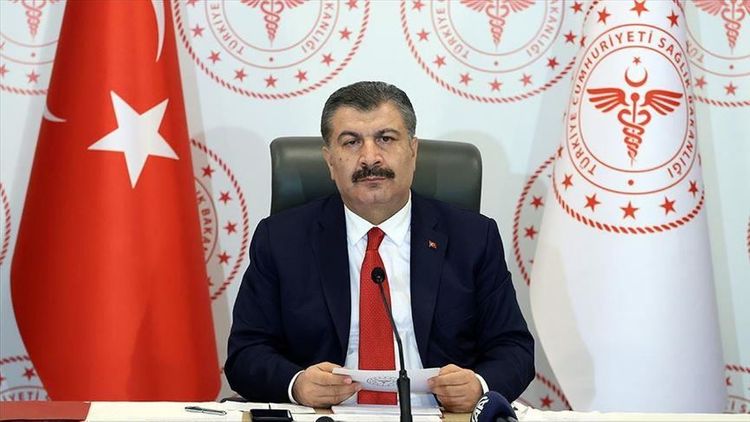 The number of coronavirus deaths in Turkey has exceeded 10,000, the health minister said on Wednesday, APA reports citing Andolu.

Turkey recorded 77 new COVID-19 fatalities over the past 24 hours, bringing the death toll to 10,027, Fahrettin Koca said after a meeting of the Coronavirus Scientific Advisory Board in Istanbul.

The country also registered 2,305 new coronavirus patients, pushing the tally to 368,513, according to Health Ministry data.

The data showed that the number of patients in critical condition currently stands at 1,836, with 5% this week suffering from pneumonia.

The board meeting, held in the capital Ankara since the start of the pandemic, took place in Istanbul for the first time as the health minister is on a five-day tour to the metropolis.

‘No problems that can obstruct health system’

Koca told reporters that COVID-19 in Turkey is currently being transmitted from one person to an average of three, urging citizens to reduce their movement and contact.

Stressing that Turkey does not have any problem that can obstruct its health system, he said discipline is necessary to curb the outbreak.

For Turkey’s success, it is essential for us to control the situation in Istanbul, the minister said, urging COVID-19 patients in the metropolis to accurately report their contacts to health teams.

He said Istanbul has the medical infrastructure required to successfully overcome the virus outbreak.

According to Koca, 55% of hospital beds and 66% of intensive care units are currently occupied in Istanbul.

He said testing capacity in the city has also been increased, with over 60,000 tests now being carried out every day.

Reiterating the need for discipline, he said the government is not considering any travel restrictions yet, but citizens should limit their movements and “postpone non-essential celebrations and ceremonies.”

Emphasizing the dangers of crowded places, he said public transport remains an area of major risk that requires a solution.

Measures such as tweaking business hours for public institutions, the private sector, and industrial zones, as well as increasing availability of public transport, were among several under discussion, according to Koca.

“Such solutions can greatly reduce people’s movement and contact, which is a major cause of the increase in virus cases,” he added.

The minister also said the scientific board advised for moving up the time limit for events such as concerts and parties, currently set at midnight.

The Interior Ministry will announce the measures once they are finalized, Koca said.

Regarding ongoing efforts to produce a COVID-19 vaccine, the health minister said Turkey’s first clinical tests on humans are expected to begin by next week.

“If all goes well, we expect our vaccine to be ready by April,” he said.