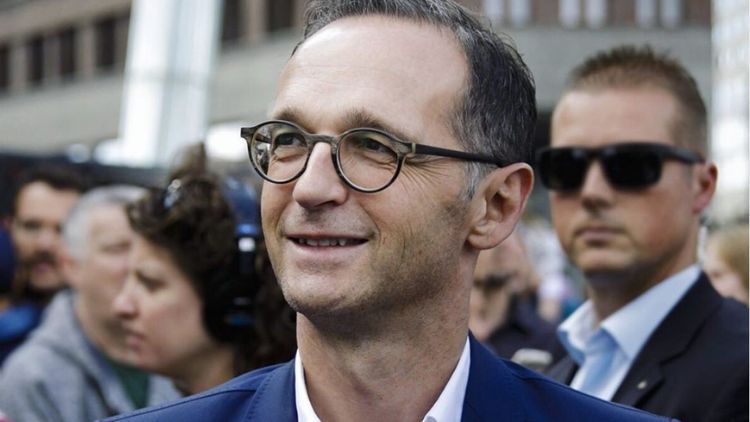 The statement of Germany’s Minister of Foreign Affairs Heiko Maas regarding the call for a ceasefire and putting pressure on Azerbaijan is causing serious regret and surprise of the Azerbaijani wide public. We will not be mistaken if we say the coming up with such a statement of the person leading foreign policy affairs of the German state instead of inviting the parties to peace and calling for ensuring of international law in such hard times when the war is going on between Azerbaijan and Armenia is a stain on the name of Germany considered as one of the two central states of the European Union.

In the times when the battles are going on, while unlike the Azerbaijani soldier, Armenians open fire on Azerbaijan’s civilian persons and civilian infrastructure, the rockets are launched from Armenia’s territory on such our cities as Ganja, Mingechevir situated many kilometers far from the regions where the battles are going on, this delirium of the minister of Foreign affairs of the state considered the leader of the European Union drawing on the principles of democracy, human rights, a humanism that is obliged to make a statement regarding Yerevan is a blow on this country’s international image. On the other hand, the reason of Germany’s staying silent when the Armenian army attempted to inflict rocket strikes in July on the energy pipelines representing special strategic significance and situated on the territory of the Republic of Azerbaijan that makes a serious contribution to the diversification of energy security of the European Union and is the most important partner of the Union in the area of energy and transport, and during the bombardment of Baku-Tbilisi-Ceyhan oil pipeline a few days ago may also be explained by the fact that indeed the official Berlin is a puppet in the hands of some geopolitical powers.

It is not occasional that today the efforts of the Baltic states led by Poland for protection of the EU’s common interests are appraised by many players higher than the efforts of such large European countries as Germany and France. Recently, the ideological confrontation regarding common European values and interests is becoming heated on the old continent. It is not surprising at all that the French and German counterparts who forgot to proceed from common European values have been regularly criticized by such states as Hungary, Poland, Lithuania, Latvia, the Czech Republic, Estonia recently.

Just as a result of the policy conducted by France and Germany considered hegemonic states of the European Union, today, we witness that the Eastern Partnership countries are sitting on a quite fragile chair between Russia and the West. The new states acting based on the collapsing bipolar world logic and being enkindled by artificial bipolarity once again started to think which side they should join as previously instead of conducting their own independent and sovereign policy. Instead of this, they have turned into the ground where the interests of the huge players clash, and as a result of this, the world policy assumed regional character, the discourse switched over from bipolarity to struggle of territorial powers. Regrettably, these states that chose the path of integration with the European values got isolated in the condition of Russia’s pressure against them, as a result of the coward policy conducted by Brussels, Paris, and Berlin fearing of conflict with the Kremlin, they faced the risk of loss of their territorial integrity being isolated on the ground.

Today, the violation of Azerbaijan’s territorial integrity repeatedly recognized by the European Union itself is continued in the Southern Caucasus. In the times when the negotiations haven’t yielded a result for 30 years, it would be better that Germany who is going on the hunt for the perpetrator of the war which started after the provocative steps of Armenia’s Prime minister, differentiates between the occupant and the party exposed to the occupation.

There are two paths in front of such international subjects as Berlin and Paris regarding the Nagorno Garabagh conflict being the main plain of the clashes. They should either defend the interests of the whole of Europe while both standing by Azerbaijan who conducts military operations on its own territory in the framework of the international law and acts as an energy partner of the European Union in the region and protecting both justice and international laws, and proceeding from common interests of the Union, or should take their place by Armenia who is called occupant in this conflict by all international organizations, and is a member of the same military, political and economic organization together with the main rivals of the Union and NATO. The choosing of the second option will turn into the most important factor that will accelerate disruption inside the Union along with inflicting a great blow on the image of Germany and France. Today, such international subjects as the European Union, Germany, France led by Azerbaijan should support the righteous stance of Ukraine, Georgia, Moldova in the area of restoration of their territorial integrity. Such states as Germany and France should know that Azerbaijan will in any case clear its territory from the Armenian militants based on clause 51 of the UN Statutes and resolutions of the UN Security Council, irrespective of anybody’s statements. Therefore it would be better that Mr. Heiko Maas proves that Germany approaches respectfully the international law. In any case, the history and the world know well that Berlin at least twice didn’t care about the world order...