History and Politics Lesson in Munich: Pashinyan in a helpless situation in front of Aliyev - ANALYSIS 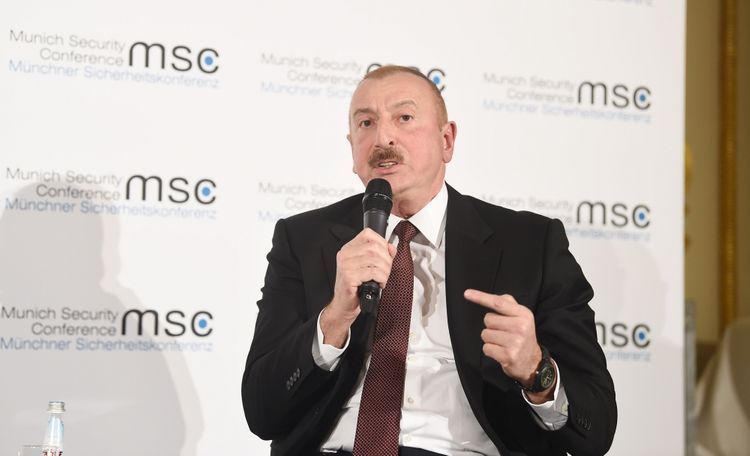 The main discussion of the region's political agenda is the panel discussions on the Armenia-Azerbaijan Nagorno-Karabakh conflict with the participation of President of the Republic of Azerbaijan Ilham Aliyev and Prime Minister of the Republic of Armenia Nikol Pashinyan which have been held as part of the Munich Security Conference.

The panel, closely followed by the world mass media was remembered by a history and politics lesson that President Ilham Aliyev taught to the Prime Minister of Armenia. Pashinyan once again fell into a helpless situation by distorting historical facts, with very poor English, dilettant political analysis, with no arguments.

During the debate, President Ilham Aliyev used the tactics of "one door game" and completely destroyed arguments of Pashinan – a political dilettant: “I will not talk about the fact that in Yerevan 70 percent of the population were Azerbaijanis in the beginning of the 19th century. On self-determination, that’s what they always talk about. Armenian people self-determinated themselves, they have Armenian state. My advice is to find other places on Earth to self-determinate them for the second time, not in Azerbaijan.”

Notable that the President with serous arguments drew attention to the fact of the occupation of Nagorno-Karabakh by Armenia: “All Armenian leaders tried differently to hold the status quo. Azerbaijani IDPs should return back to their territories. More than 80% of armed forces in the occupied lands are Armenian soldiers. They think that they can keep these territories forever. Never.”

President Aliyev once again clarified Baku's position on the settlement of the Karabakh conflict. The head of state said that this conflict should be resolved in phases: “The liberation of part of territories and return of IDP. The status of NK can be defined later. Status must not interfere with the territorial integrity of Azerbaijan.”

The head of state also proved that the new political leadership of Armenia violated the negotiation process: “Now, when Prime Minister Pashinyan talks about his proposal that the resolution must be accepted to the people of Azerbaijan, I answered to that and I said what is acceptable to the people of Azerbaijan? People of Azerbaijan, those who suffer from Armenian aggression want to go back to their homes. It is their fundamental right. They are deprived from this right for almost 30 years. Because Armenian leadership, it is not Nagorno-Karabakh, and when Prime Minister talks about the so-called self-defense forces of Nagorno-Karabakh again he is telling thing which is not true. Because he knows very well and I know, that more than 80 percent of the so-called Nagorno-Karabakh army are citizens of Armenia, and this is true, maybe even more than 80 percent. Therefore, there is no Nagorno-Karabakh army. There is no Nagorno-Karabakh republic. Only two parties to the conflict, Armenia and Azerbaijan. Ask the OSCE Minsk Group co-chairs. Who are the parties to the conflict? They will say the same. Armenia and Azerbaijan. Nagorno-Karabakh is not. Why is not? It is other question, but it is not and we are not going talk to them. We are talking to aggressor. We are ready to talk to Nagorno-Karabakh in case, Armenia stops funding this illegal entity, Armenia pulls back all their military troops from Nagorno-Karabakh and completely withdraws from our territory. And then, we will have arguments to talk to these people. But until then there is no way and they want to keep the status quo unchanged. They think that they can keep these territories under occupation forever, and I am sure that will not be the case, and our territorial integrity must be restored. We had, coming to the second part, we had an exchange of journalists recently. And I think that was an experience which we need to evaluate. We need to evaluate its positive and negative side. Because part of society in Armenia and in Azerbaijan was not very supportive to that format but that was the decision by two leaders to try. We want to try every opportunity to find a peaceful settlement. To persuade Armenian people that they can not live like that forever. They need to find solution with us, and live in the future, in peace as neighbors."

The world media, emphasizing the undeniable superiority of Ilham Aliyev in this debate, writes about Pashinyan’s manipulation of words in Munich. It should be noted that Pashinyan once again proved his ignorance of the history of the recent past. Firstly, Nagorno-Karabakh during the USSR was not forcibly attached to Azerbaijan. These territories were also part of Azerbaijan during the ADR period. Speaking about the conflict, President Aliyev referred to international law, history and legal documents. But Pashinyan generally behaved like an ignorant and casual person, even the appeal to the book that he brought with him did not help him. We bring to the attention of the Prime Minister of Armenia one fact - in August 1919, during the international conference on Karabakh in Shusha, the Armenians themselves officially confirmed that Nagorno-Karabakh is the territory of Azerbaijan.

Falling into a helpless situation in front of President Ilham Aliyev, Pashinyan once again demonstrated illiteracy with his approach “Nagorno-Karabakh, as Azerbaijan having left the USSR, became independent” and left himself in a desperate situation.

During the discussions, the President of Azerbaijan also expressed his opinion about the mediators, which aroused great interest among the media: “OSCE MG Co-Chairs should explain to Armenia that Nagorno-Karabakh is not Armenia. No country recognized Nagorno-Karabakh.” The President in his speech also brought to the attention that Armenia destroyed the cultural heritage in the occupied territories of Azerbaijan.

It is noteworthy that Pashinyan was confused during the debate. Journalists sarcastically accepted his reservation "... the Caucasian Bureau decided that Karabakh is the territory of Azerbaijan." But then, realizing that he was telling the truth, he immediately added: "Sorry, Armenia."

Note that the diplomatic victory of Ilham Aliyev in Munich was recognized and supported in Azerbaijan by everyone, regardless of political affiliation. There are no disagreements on the Karabakh issue in Azerbaijan. From this position, President Ilham Aliyev not only won a diplomatic victory over Pashinyan in Munich, he also showed the whole world that the Azerbaijani people support Ilham Aliyev and his policy regarding Karabakh in the country, regardless of political views, there is full support and solidarity with the principle the position of the President. For Armenia, suffering from internal strife, this factor is of great importance. Tortured Armenia has no chance to withstand Azerbaijan, which demonstrates complete unity and solidarity.