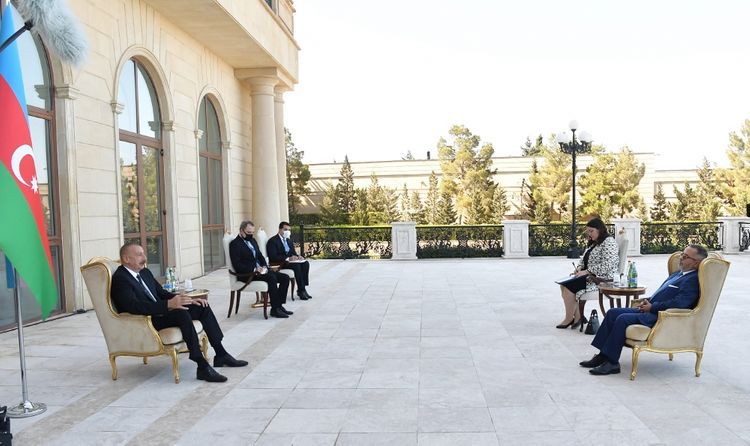 President Ilham Aliyev touched upon a number of points that are sensitive for our country on September 2 while accepting credentials of extraordinary and plenipotentiary ambassadors of Japan and Greece newly appointed to our country.

Meanwhile, the statements voiced and the messages given by the head of state when receiving the Greek ambassador Nikolaos Piperigkos attracted more attention. The President voiced quite open statements based on Azerbaijan’s national interests at the meeting with the Greek diplomat. Ilham Aliyev being a diplomat by his specialty brought to the notice of the world community and at the same time Greece in a very open manner the points that are sensitive for Azerbaijan during the meeting with trhe ambassador, declared important nuances in the foreign policy behavior of the official Baku. President Ilham Aliyev once again put forward our country’s resolute position in the contest of Azerbaijan’s foreign policy issues, our national interests and relations with Greece, demonstrated commitment and strong will.

President openly brought to the notice of the Greek ambassador that there are several reasons for stagnation in relations between Azerbaijan and Greece during the recent years.

Firstly, the head of state said this is associated with wrong behavior conducted by the Greek government against SOCAR for political reasons. Thus, despite of winning of tender by SOCAR who joined open tender in order to purchase DESFA gas company based on request and proposal of the then head of the Greek government and making of $ 40 million advance payment by Azerbaijan, was driven out from the country by the decision with political motifs of the Syriza government while SOCAR owned a completely legal share in DESFA. President Ilham Aliyev saying that this step of the Greek government was far from partnership spirit, accused the former Greek government of actually conducting the anti-Azerbaijan policy.

Secondly, this is the military support of Greece to the occupant Armenia. The head of state touching upon Greece-Cyprus-Armenia military cooperation, brought to the notice of the Greek ambassador newly appointed to our country the resolute and principal position of Azerbaijan in regard to this issue. The President reminded the Greek ambassador the document initialed between the EU and Azerbaijan and entitled as Partnership Priorities that expresses support for territorial integrity and inviolability of borders of Azerbaijan. By this reminder, President Ilham Aliyev as a skillful diplomat brought to the notice of the official Athens the necessity of respectful approach to international law by Greece being a member of the European Union that signed this document.

Open message to Russia who provides military support to Armenia

By the way, as in all his meetings, during this meeting as well, the President unmasked the policy conducted by the Armenian state and sent a message to the states who implement military cooperation with this country. The head of state specially stressing that the intensive supply of weapons by Russia to Armenia immediately after Armenia’s provocation on the border caused serious concern in Azerbaijan, also openly expressed his incisive comments to the official Moscow. “The active clashes were stopped on July 16 and beginning from July 17 until yesterday, - yesterday, the last flight was performed, - the multiple cargo flights were implemented from Russia to Armenia via air space of the Caspian littoral states. We also raised this issue with our Russian counterparts saying that the military cooperation with Armenia is the issue that concerns us. Because this creates an important threat for Azerbaijan, because using these weapons, they kill our military servicemen, civil persons”, the President of Azerbaijan openly announced his discontent.

Indeed, the dispatch of military cargoes to Armenia by Russia being the OSCE co-chair country and naming Azerbaijan its strategic partner during and after Tovuz incidents and Shoigu’s explanation saying “as if the aircrafts carried construction materials to the 102nd military base” during his visit to Baku couldn’t be taken seriously by Azerbaijan. Thus, we clearly witnessed once again that Azerbaijan’s state interests are above allthings for President Ilham Aliyev.

Turkey’s every step will be supported by Azerbaijan

As a result of just the patronage over Armenia by some geopolitical forces waging struggle for the region, we are witnessin expansion of military union between Azerbaijan and Turkey in recent times. Nikol Pashinyan and David Tonoyan who remained silent and demonstrated cowardice in front of President Ilham Aliyev who made a call on the Armenian leaders saying “let’s fight on the battlefield one-to-one”, regrettably, relying on their historical patrons, continue their provocations in the post-Tovuz period as well. On the last occasion, they resorted to provocation on the site of Goranboy. And this may also lead to entry of Azerbaijan into military alliances versus Armenia who doesn’t wish to fight on the battlefield one-to-one. Undoubtedly, while touching upon the topic of our country’s friends, the brotherly Turkey occupies the first place in this list. It is not surprising at all that during the meeting with the Greek ambassador, President openly expressed his support to Ankara being the first and only leader among the world leaders in the conflict between Greece and Turkey in the Eastern Medietrranean Sea region in recent times and said “We support Turkey without any hesitation and will support in all cases”.

It is appropriate to remind that the head of the Azerbaijani state has repeatedly expressed his support to the brotherly Turkey in various issues, has said he stands by every step of Ankara. For instance, at the summit dedicated to the 5th anniversary of the “Eastern partnership” program held with participation of heads of states and governments on April 24, 2014 in Prague, the President of Azerbaijan gave sharp response to the attacks against Turkey by the then President of Armenia Serzh Sargsyan saying: “Armenia’s President availing from the opportunity given here once again makes an attack on Turkey. It is easy to do this because there are no Turkish representatives at this table. But I am here and I can say why Turkey-Armenia border is closed”.

Thus, President of Azerbaijan Ilham Aliyev during his meeting with the Greek ambassador openly brought to the notice of the new government in Athens his position regarding Azerbaijan’s state interests. At the same time, on the backdrop of the military and political pressures exerted on Azerbaijan in recent times, President Ilham Aliyev openly delivering his incisive comments and wishes to all forces interested in the region, demonstrated that the official Baku approaches sensitively and attentively all issues related to the conflict and draws conclusions from military cooperation of neighbor states with Armenia.

And most importantly, President Ilham Aliyev once again openly and resolutely declared in front of the world community his principal position regarding national interests of our people.

Chief lecturer of the State Governance Academy under the President, candidate of political sciences, head of Baku Politologists Club