International media and journalists in crosshairs of Armenian terrorism - ANALYSIS 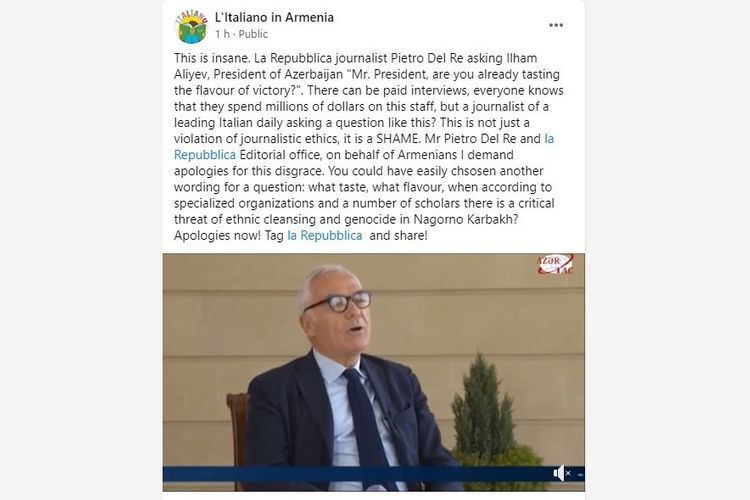 The terrorist country Armenia being smashed under strikes of the Azerbaijani Army has chosen free media as its target now. Every journalist who displays an independent stance prepares objective information that has already turned into target of the Armenian gangsters. The Armenian lobby implementing terrorist acts in the most diverse countries, killing civilian population has become even more shameless in recent days and keeps under fear and panic the world media lightening the counteroffensive operation successfully implemented by Azerbaijan.

Even almost all foreign journalists who did an interview with President of Azerbaijan Ilham Aliyev were exposed to the blackmail of the Armenian lobby, are intimidated, are threatened with death.

The talking in these terms to the world media by the terrorist country who lost its head from heavy defeat is undoubtedly evaluated as foolishness. For instance, journalist of La Repubblica Pietro Del Re was exposed to Armenians’ anger because of the “Mr. President, You have already tasted victory, haven’t you?” question addressed by him to President Aliyev. The renowned journalist of Italy’s leading newspaper is threatened with death for this question and he is intimidated with the howls saying “How can one talk about any taste, any enjoyment when Nagorno Garabagh faces the ethnic cleansing and genocide threat? You should apologize right now!”.

The Armenian lobby spending millions of money in order to arrange false propaganda in the world media doesn’t want to understand that the culprit of their defeat on the front is not free media but Armenia’s leadership – Nikol Pashinyan who disrupts the process of negotiations, orders to kill Azerbaijan’s civilian population.

The journalists of TF1, CNN, New York Times and other media outlets writing the truth, taking objective stance are also in the crosshairs of the Armenian Diaspora. The purpose is to turn the world media as well into purveyors of their lies. If anybody doesn’t think as they do, doesn’t write what they want, then he is the enemy – regardless of his personality... This is just the Armenians’ attitude to free thinking and free media.

Assistant to the Azerbaijani President, Head of Foreign Policy Affairs Department of the Presidential Administration Hikmat Hajiyev has also commented on his Twitter account on the gangster activity of Armenians: “And now, journalist of Italy’s La Repubblica newspaper Pietro Del Re is exposed to the insulting attack of the Armenian lobby. The Armenian lobby has also exposed to physical threats to the journalists of TF1, CNN, and the New York Times. We firmly condemn such attacks on free media, freedom of expression”.

Hikmat Hajiyev called on Reporters Without Borders organization and the OSCE Representative for Media Freedom to condemn physical, oral threats, insulting personal attacks on professional journalists, media who lighten objective realities of Armenia-Azerbaijan conflict, said the freedom of expression should be respected.

In fact, Armenians are annoyed to this extent by the matter that the number of those in the world mass media who understand and accept the truths of Azerbaijan and Nagorno Garabagh is increasing. Even in some European countries where the Armenian Diaspora was considered the strongest one, the criminal behaviors of Armenians cause hatred in ordinary people. However, the strengthening of persecution of Europe’s objective public and political figures and media representatives by the Armenian terrorists also puts under heavy blow the pro-Armenian politicians of those countries. The European countries, for instance, the political elite of France where the Armenian lobby is strong should acknowledge that the tolerant approach to and even protection of the terrorist attempts of the Armenian lobby today don’t fit together at all with democracy.

Official Paris should not be silent about the death threat of the journalist of the TF1 channel of France, which is the largest country of Western Europe, by Papazyan, a member of the ASALA terrorist organization.

All of these happenings once again demonstrate to all of the world that how real and dangerous Armenian terrorism is today. All the world once again clearly realizes that Azerbaijan actually faces who, with what kind of occupier country, with the units turning terrorism to state policy and demonstrating it in their trait, behavior in every step.

Threatening journalists with death contradicts European values, human rights. Those who threaten freedom of speech and the press with terrorism threats should receive the punishment they deserve. Otherwise, the Armenian lobby may subject political elites and civilians of European countries to terrorism.

These steps show how Armenian terrorism is a real threat to the world. And the world has one truth - they do not talk to the terrorist, they destroy him. The Azerbaijani Army is carrying out this mission by liberating its territories from occupation.