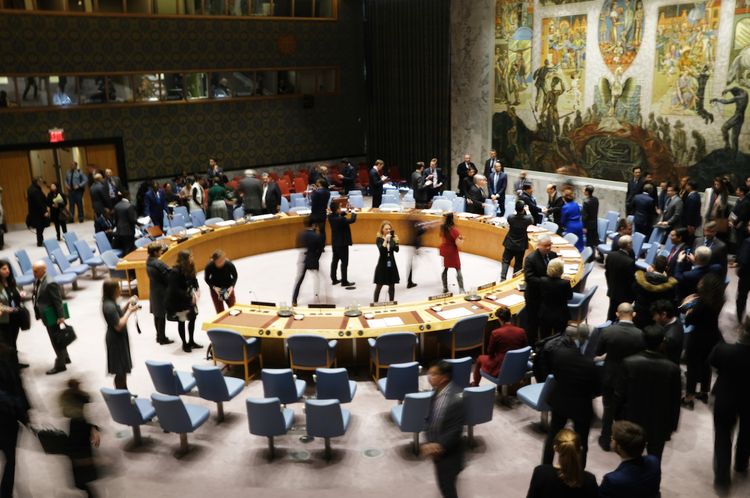 The refusal of a number of western countries to pass the proposals on easing unilateral sanctions will make it more difficult to give a global and solidary response to the threat of the coronavirus pandemic, Russia’s permanent mission to the United Nations said in a statement when commenting the refusal of Ukraine, Georgia, UK, US and EU to pass a relevant resolution initiated by Moscow in the UN General Assembly, APA reports citing TASS.

Earlier the UN General Assembly adopted an alternative and wider draft declaration on solidarity in countering COVID-19 pandemic, which ignored the UN Secretary-General’s urge to lift sanctions. However, the document proposed by Russia was not adopted.

"Our text envisaged: recognizing the leading role of the WHO in combating the pandemic; consent of states to cooperate, i.a. in order to develop methods that should stop the spread and ensure treatment of the COVID-19 disease; providing assistance to the most vulnerable states, especially developing countries; rejection of trade wars and unilateral sanctions adopted without the mandate of the UN Security Council, in order to ensure early access to food and medication; countering financial speculations with essential supplies," the statement said.

"Our document failed to be adopted by consensus. Ukraine, Georgia, UK, US, and EU prevented it," the diplomatic mission noted.

Such a decision will make it more difficult to respond to the pandemic threat, according to the statement. "We regret that a small group of states championing sanctions-based policy appeared unready to respond to the call of the UN Secretary-General and refused to cast aside politicized approaches and interests. As a result, it will be much more difficult to give a global and solidary response to the threat of the new pandemic. A great number of people, in the developing countries in the first place, might be affected," the document said.

"We would be very interested to hear and see in writing reasoning and arguments for blocking our draft Declaration by the EU, US and UK. We would be willing and happy to spare and exempt Ukraine and Georgia from undertaking this exercise, as their arguments, as ever contemptuous and politicized, would not add any value to the understanding by most of the member-states," the mission said.

Russia’s declaration was co-sponsored by 28 UN member-states. "We will set forth coordination with our like-minded colleagues on that matter," the statement added.