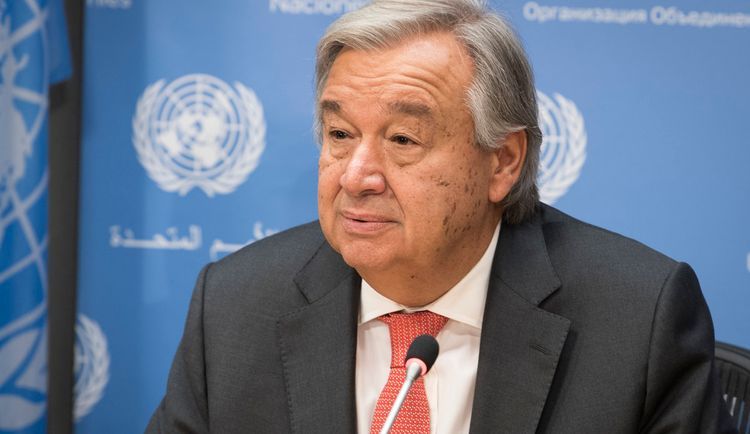 A group of intelligentsia, representatives of religious and national communities have made an appeal to UN Secretary General Antonio Guterres regarding Armenia’s latest military aggression against the positions of the Azerbaijani army along the line of contact, settlements far away from Nagorno-Karabakh, and its deliberately targeting the civilian population and children.

At first glance, it is very humanistic approach that you are very concerned about the resumption of hostilities along the line of contact in the Nagorno-Karabakh conflict zone, condemn the use of force, and express regret over the casualties among the civilian population and call for constructive talks without delay. But every issue has a history. The Armenia-Azerbaijan Nagorno-Karabakh conflict also has its own history, and it is impossible to make an objective decision without knowing it.

First of all, Resolutions 822, 853, 874 and 884 of 1993 on the Armenia-Azerbaijan conflict by UN Security Council, which is the main guarantor of international peace and security, explicitly demand that the Armenian armed forces withdraw from the occupied territories of Azerbaijan fully and unconditionally. These resolutions condemn the aggressive steps taken against Azerbaijan, protect non-conflicting civilians and emphasize the inadmissibility of the use of force to gain territory, while reiterating the territorial integrity, sovereignty and inviolability of Azerbaijan's internationally recognized borders. A small reminder: As you do know that in addition to the Nagorno- Karabakh region, the Armenian occupiers are occupying 7 regions of Azerbaijan that are outside Nagorno-Karabakh, and Azerbaijan is currently fighting for the liberation of its seven regions.

For this reason, in our opinion, in accordance with the above-mentioned resolutions of the Armenia-Azerbaijan Nagorno-Karabakh conflict, the parties to the conflict should not be treated equally, and Armenia should have been demanded to immediately suspend military operations and withdraw its forces from the occupied Azerbaijani lands. In addition, Armenia has once again resorted to military aggression against the positions of the Azerbaijani army along the line of contact from September 27, and the densely populated cities of Ganja, Mingachevir, Naftalan, Barda, Agjabadi, far from Nagorno-Karabakh from October 4. It shells on Tartar, Shamkir, Khizi, Absheron regions and other settlements with large-caliber weapons and artillery. Ignoring the calls of the Republic of Azerbaijan, Armenia openly and deliberately targets violates international humanitarian law, including the 1949 Geneva Conventions. As of October 5, as a result of artillery and rocket attacks from Armenia's territory, about 30 Azerbaijani civilians were killed, 125 were injured and more than 500 residential buildings and civilian facilities were destroyed. The Armenian armed forces launched two rocket attacks on the city of Mingachevir, where the reservoir and the main power plant are located. Ganja, the second largest city in Azerbaijan with a population of more than five hundred thousand, was shelled by cluster bombs banned by relevant international conventions.

For these provocative actions, we request you to urge Armenia to urgently comply with the norms and principles of international law, international humanitarian law and UN Security Council Resolutions 822, 853, 874 and 884 of 1993 on the Armenian Azerbaijani conflict. Armenian invaders must leave the occupied territories of Azerbaijan. Only then, peace can be established in the region. The people of Azerbaijan, together with Muslims, Orthodox, Jews, Catholics and Udi Christians, are patiently and hopefully expecting you to take such a just step.

Azerbaijan is a historically tolerant country with multicultural values. There are multicultural organizations here, and they are constantly contributing to the establishment and development of close, warm relations between different peoples, religions and cultures. We would like to say that such a multicultural situation is unique in the whole region, and this is the key to understanding many issues from the beginning.

We hope and believe that this key will be helpful for you to open the door of the path to truth and justice.” 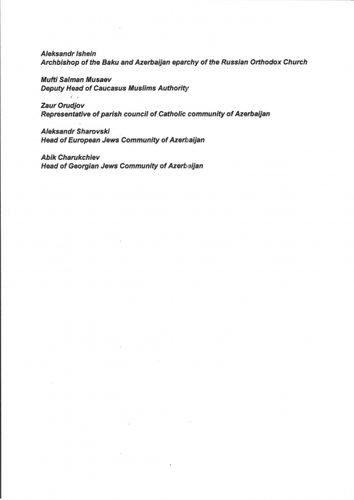 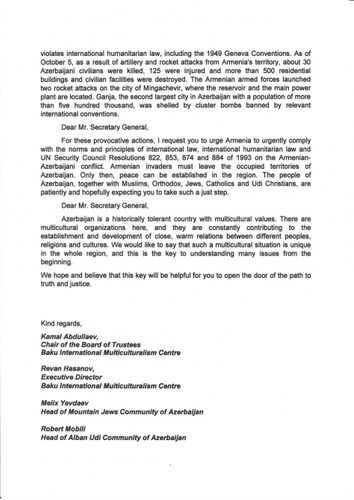 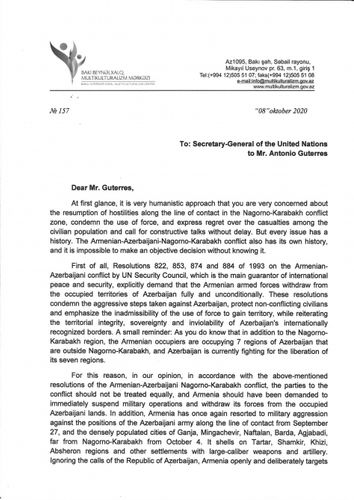