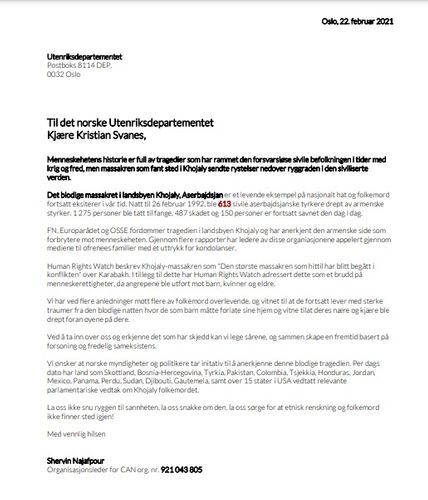 On the eve of the 29th anniversary of the Khojaly genocide, diaspora organization CAN operating in Norway appealed to the Norwegian Foreign Ministry and parliament, State Committee on Work with the Diaspora told APA.

The appeal with the signature Head of organization Shervin Najafpur sent to official organizations says the bloody massacre in the Azerbaijani city of Khojaly is a clear example of the existence of national hatred and genocide today.

The appeal provides detailed information about the genocide committed by Armenian armed forces against peaceful Azerbaijanis in Khojaly on the night of February 25-26, 1992. It has been brought to notice that international organizations such as the UN, the Council of Europe, the OSCE and Human Rights Watch have condemned the Khojaly tragedy.

Ukrainian MFA calls on Georgian authorities to hand over Saakashvili

EU doubles to 30,000 number of Ukraine troops to train

Residents: There is a shortage of tents, population leave the city-PHOTO

President of Moldova called on Georgia regarding Saakashvili