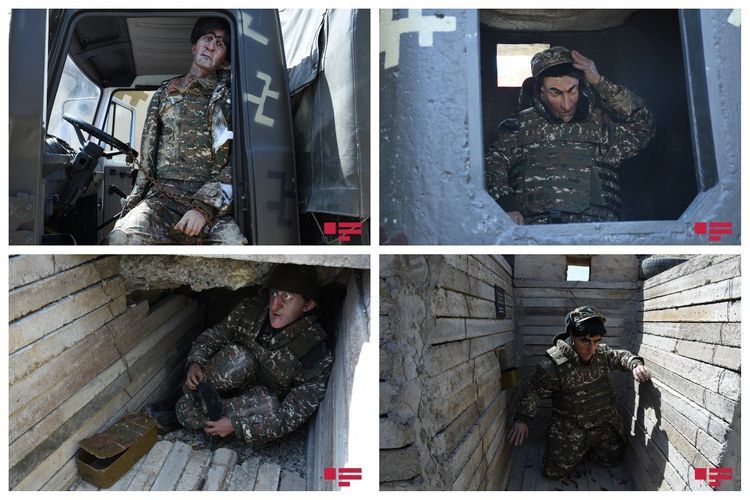 “Oh son, help us lift the child on the rock,” said an old man with a handstick and 5 or 6 years old boy.

I silently cling to the child's armpit and lift him over the stone pitcher of the underpass.

Although the view from here is a bit better, the iron fence in the back is still an obstacle. 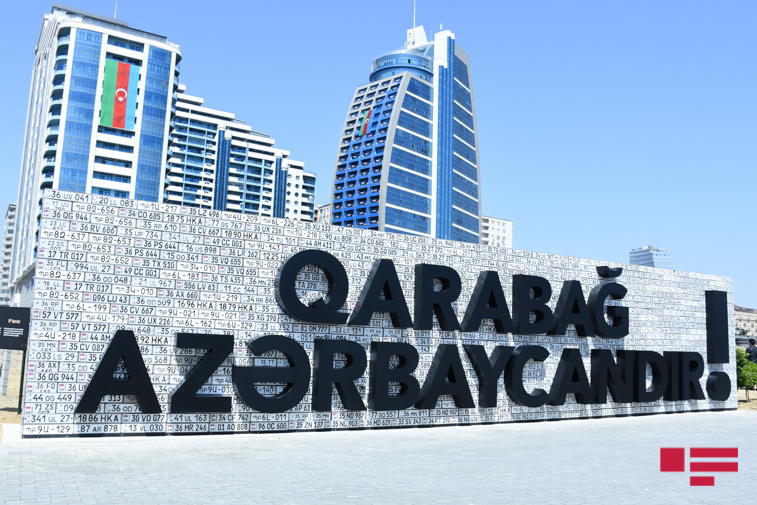 I ask why you are in hurry (today is April 13 – M.A ), You will be allowed to enter from tomorrow, you can come and walk comfortably, and you can also take good pictures.

“It is impossible. We came from Gabala. We heard, such a place was established here, we said let's see the power of our state with our own eyes, and my grandson wanted it too. They say the place will be opened to the public tomorrow. We will return back to Gabala in the evening. Anyway, let's see from here.”

The child turns to his grandfather and smiles at the phone's camera, making a "V" sign with his hand. In the rear, enemy tanks, artillery, weapons, and ammunition seized as military trophies... 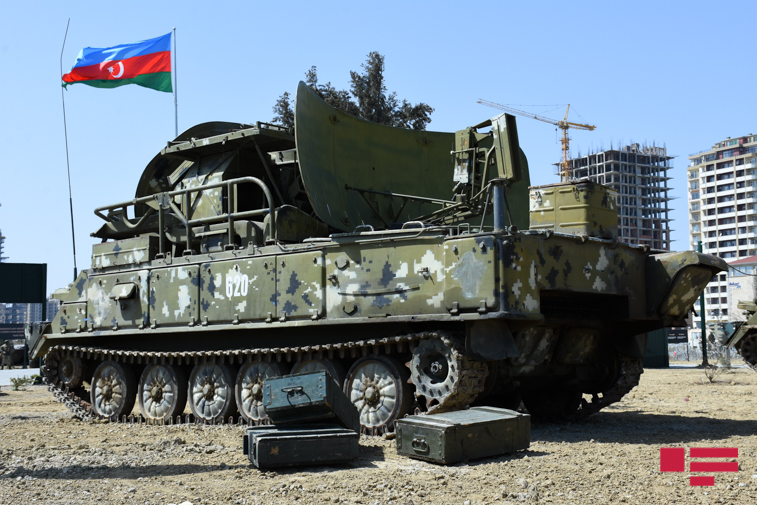 Here is Military Trophies Park. The open-air museum on Baku Boulevard. The head of state inaugurated this place on April 12, and from April 14 the Park will be fully ready for the arrival of visitors. However, from today, hoü they say, residents and visitors of our city (like that grandfather and grandson) come to visit the Park. 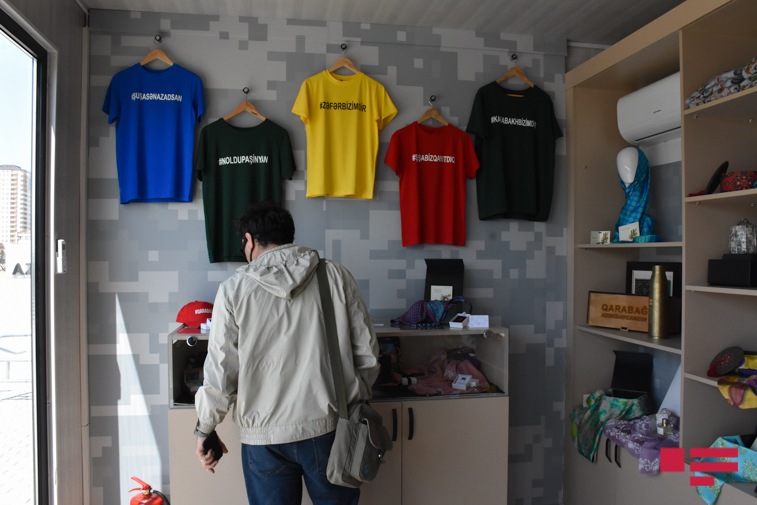 When you enter the territory of Military Trophies Park – I would say museum, first of all, you come across the information corner and the pavilion of souvenirs placed opposite it. 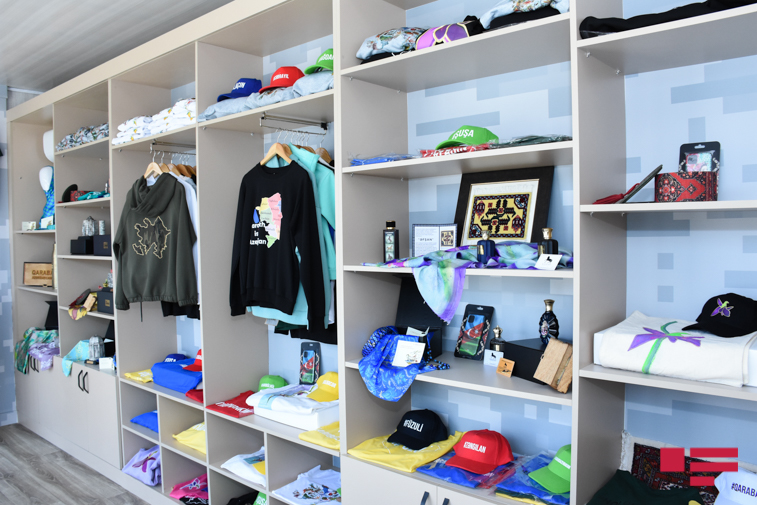 A sweet smell spreads in the pavilion.

“What perfume is it?” one of my colleagues, who is looking at the pavilion with us, immediately asks.

“It is "Khurshudbani Natavan" perfume” and I show its place.

"What a nice smell!" my colleague cannot hide her astonishment. 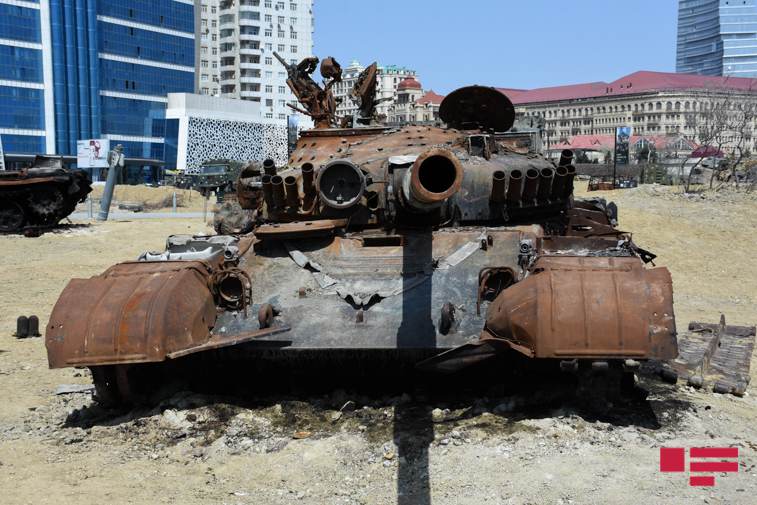 We leave the pavilion rich in interesting souvenirs and continue our excursion.

In front of the entrance, the Azerbaijani flag is waving in the square and behind it, there is a board with the number plates of Armenian cars with the slogan "Karabakh is Azerbaijan".

Recalling that, this board was also displayed during the Victory Parade, and now it has its place in the Park. 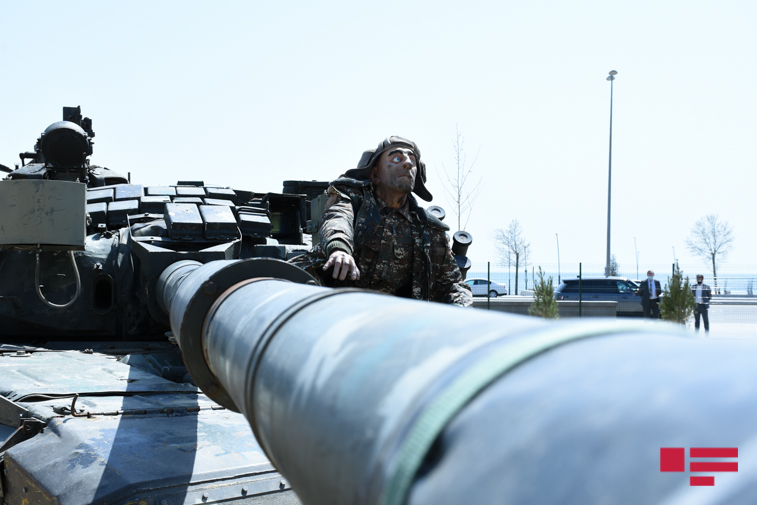 Besides it, a large board – info-graphic, which records the events of the 44-day Patriotic War in chronological order. Information not only on the achievements of our Army from September 27 to November 10 but also military crimes, committed by Armenians in Ganja, Barda, Terter against civilians, has been placed on the info-graphic. In short, those, who are not aware of the war, especially foreign tourists, can get acknowledged with the course of military operations day-by-day by looking at the board.

There are three more pavilions, two of which are used by Armenian armed forces, weapons, and military ordnances, most of which are still in working condition, are demonstrated there. Automats, mortars, machine guns, grenade launchers can be noted among them. Note that exposition has been developed with high taste, its lightening has a special place…

Remains of “Iskander M” missiles, shelled to Shusha, are demonstrated in the other pavilion. 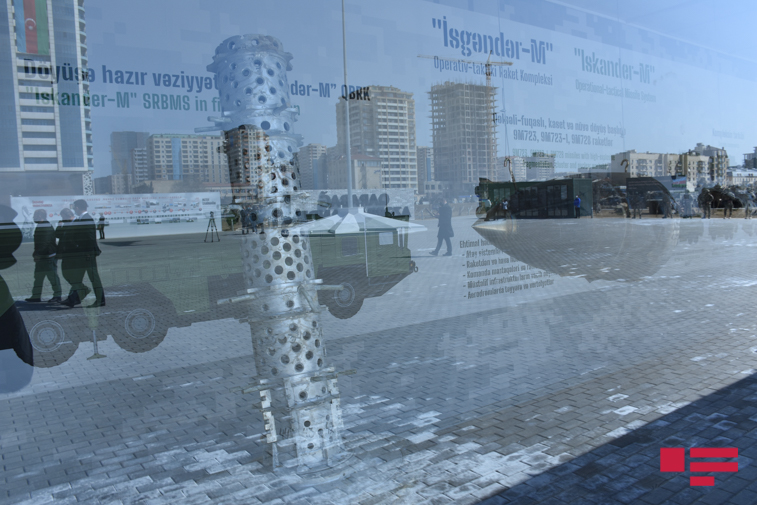 Parts of “Smerch” and “Tochka U” missiles are demonstrated at open-air a little far away. These weapons are enough to understand the scope of Armenia’s military aggression. It is possible to watch the missiles, an event to look through their writings, details by approaching. Probably, there is the only place in the world that mentioned missiles can be seen by civilians closely. 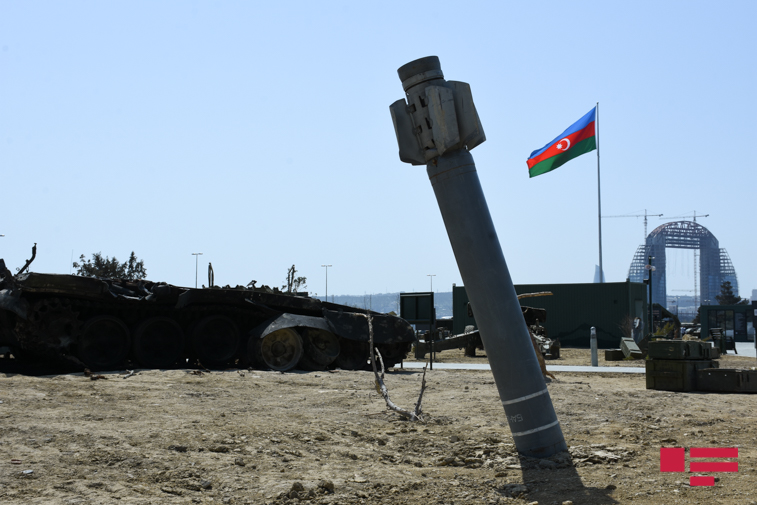 In total, the area of the Park, where more than 300 military exhibits are demonstrated, is five hectares. Besides mentioned expositions, the enemy’s about 150 destroyed heavy equipment – tanks, guns, infantry fighting vehicles, 2S1 Gvozdika self-propelled howitzer, “OSA”, KUB artillery-missile complexes, and other exhibits are demonstrated. Although most of them are those, video footages of hitting down of which we saw during the Patriotic War, some are in good condition. As we look at the hit military equipment, carrying signs of the war on them, video footages, which we saw during the Patriotic War, visualize in front of my eyes again. Yes, the Patriotic War of 44 days became a new and modern war for the world with modern weapons and combat strategy. From this point of view, Military Trophy Park should not only be considered as a place, where the enemy’s heavy military equipment is demonstrated, but also a cemetery of old military equipment, remained in the 20th century. Azerbaijani Army buried worn-out military tactics in the darkness of the history and established this amazing Park with its courage. 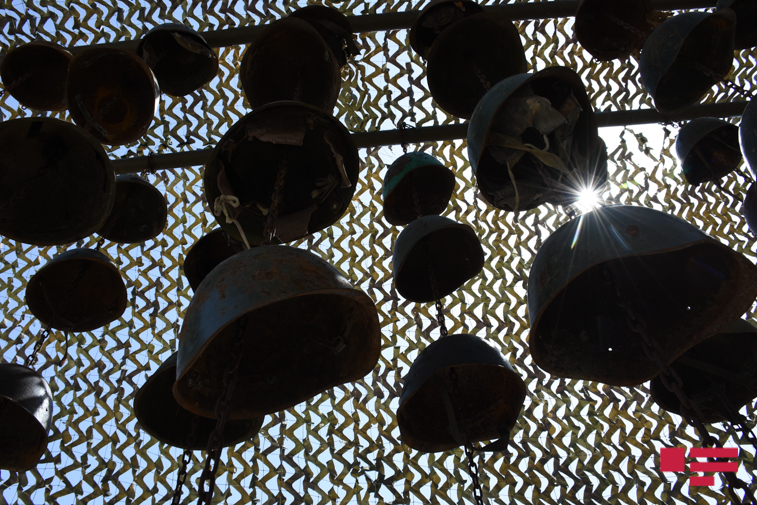 Well, I should note without forgetting that military equipment is not demonstrated in the Park by chance, development of expositions has been approached interestingly. 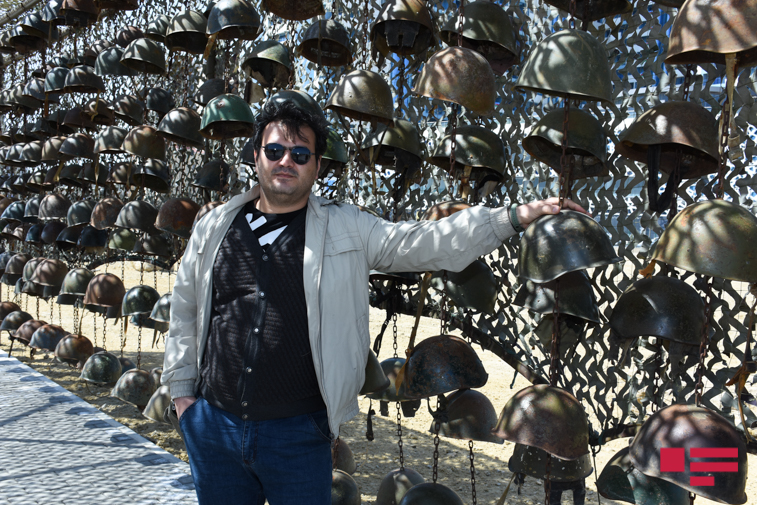 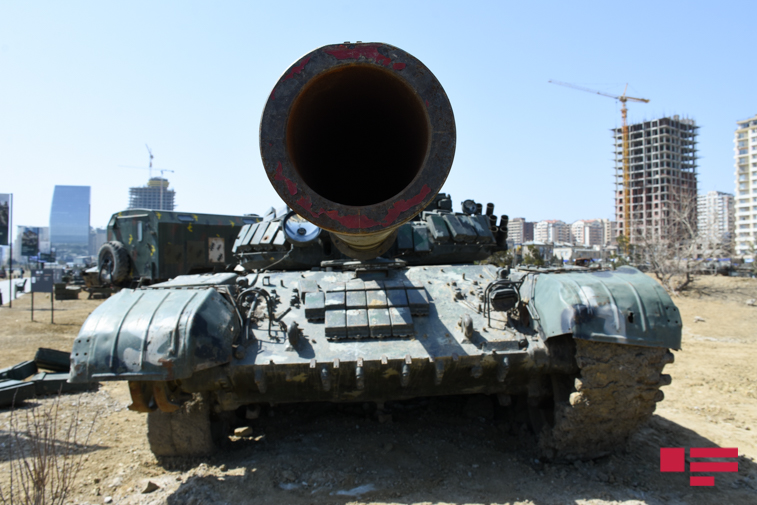 Helmets have been hung from chains hanging on both sides along about a five-meter-long passage. As you pass through the place like a tunnel, you feel as you walk through enemy army, willy-nilly causes panic: these helmets were not empty just 5 months before, angry enemy sights were directed from them against us. But now the ringing bell from helmets, which touch one another with a slap of crazy Baku wind, increases the atmosphere of exposition twice, flutter of these rusty helmets becomes a death bell and sounds like a requiem for the enemy, whose ears are always with us, although they are in far away from themselves. 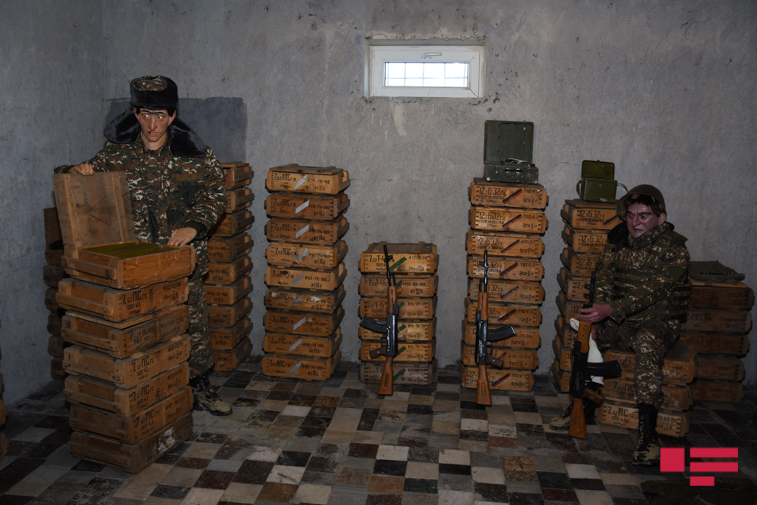 Expositions do not end with this. During 30 years of occupation, reflection of the ten-element engineering barrier system that the enemy has always proudly talked about is also being demonstrated here. 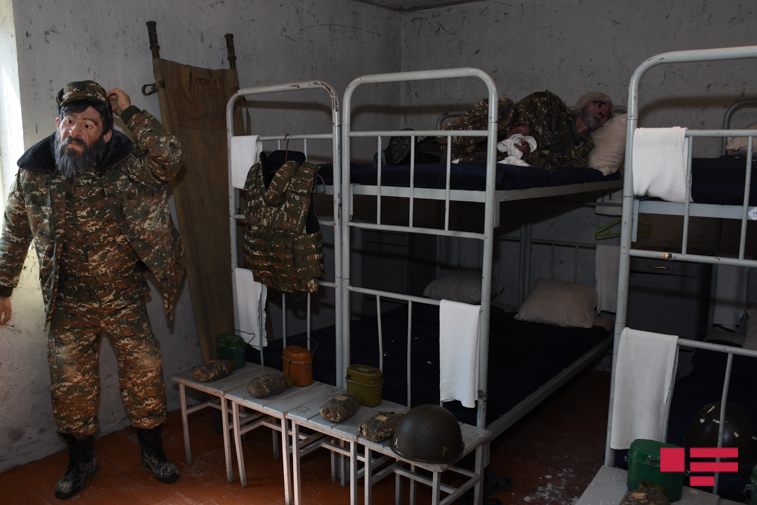 During visits to Karabakh, we saw many such engineering barrier systems, but now the same of these barriers are established at the center of Baku. Those who cannot go to Karabakh and see those obstacles live can see how the enemy has created a defensive position, what barriers the Azerbaijani soldier has broken. 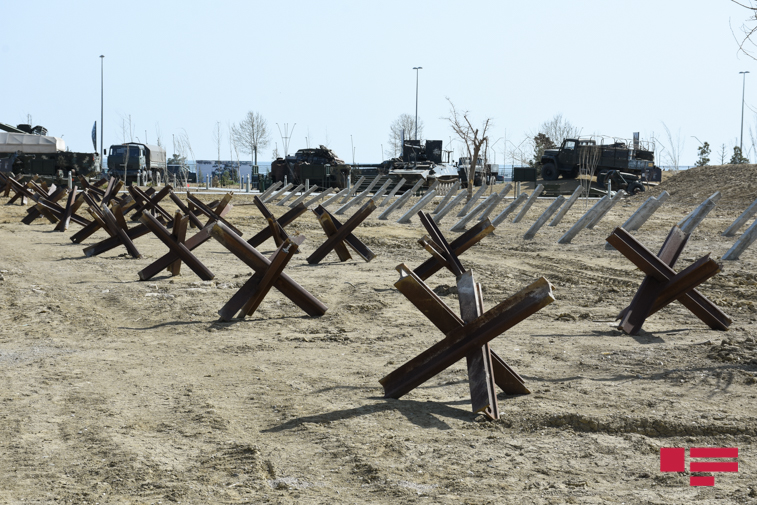 Thanks to this exposition, it is possible to imagine visual process of war.

Elements of engineering barrier systems are as follows:

10. ribbon wire barrier over the trench. 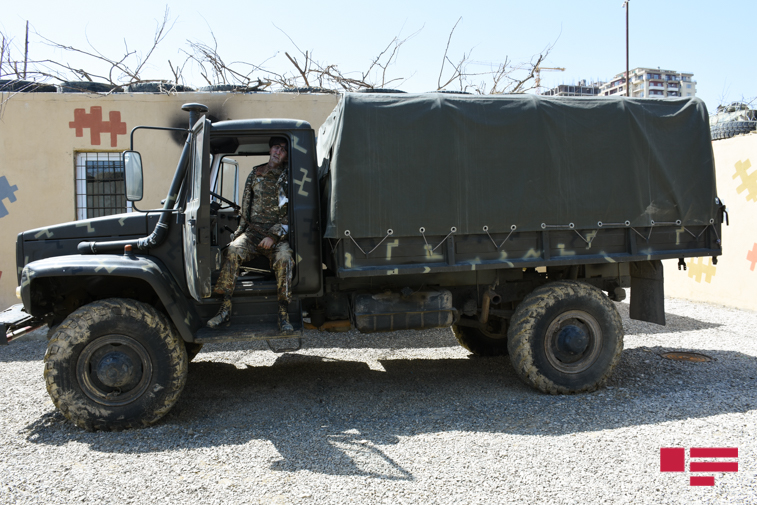 Think of our tanks crossing these obstacles for a moment, or of our soldiers trapped in barbed wire and shot in the trenches in front of them. They crossed such big obstacles and gave us a taste of victory. When you think that when since the beginning of the war, from September 27, our army crossing obstacles impossible to pass, inflicted crushing blows to the enemy, you can not help to be surprised. 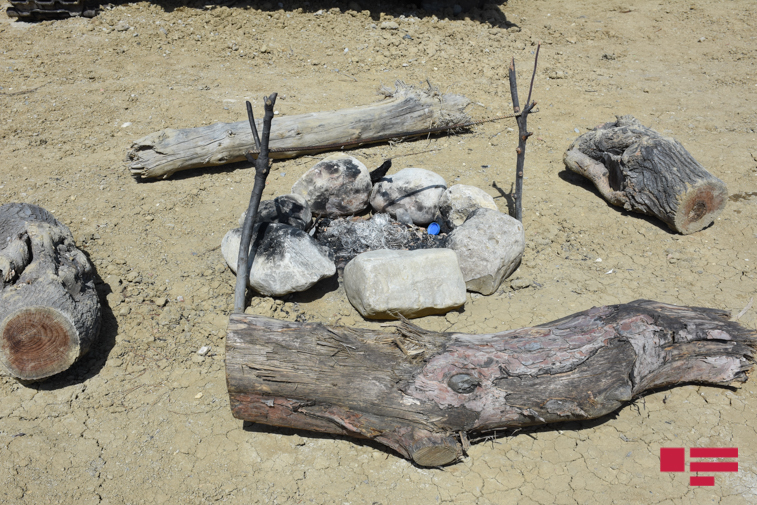 From that point of view, the park established in the center of the city is enough to demonstrate the bravery of our army. As I said, we know it, tourists who will come to the park, will also see the difficulty and courage with which we achieved victory. 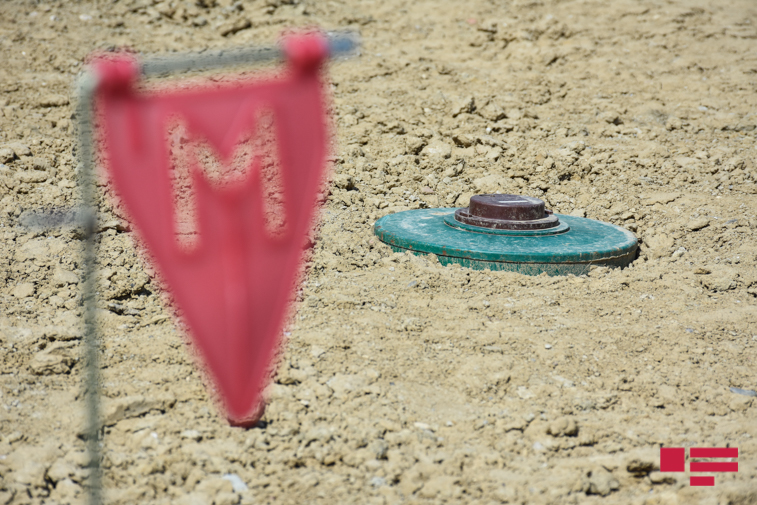 In fact, after these obstacles, the enemy's trenches come, and a model of them has been made in the park.

While walking through fortifications dug in the soil with concrete poles, reinforced with machine tires, you feel yourself in the trench of the enemy. Every exposition used here is real. Kettle on the wood stove, a pile of wood next to it, iron plates on the table, communication devices, baked buckwheat, flour, bean sacks in the enemy's "warehouse" were used by the enemy until recently. There are still fingerprints of the enemy on it. 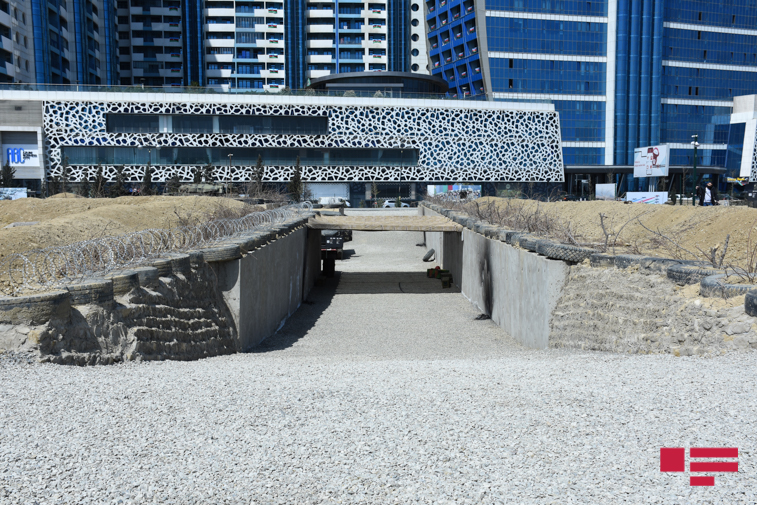 The waxwork of the enemy soldiers add realistic color to this picture. As if you are really inside of the enemy’s army. Otherwise, our photographer would not be frightened when he saw a soldier who suddenly appeared in one of the primary trenches and "shot" us. 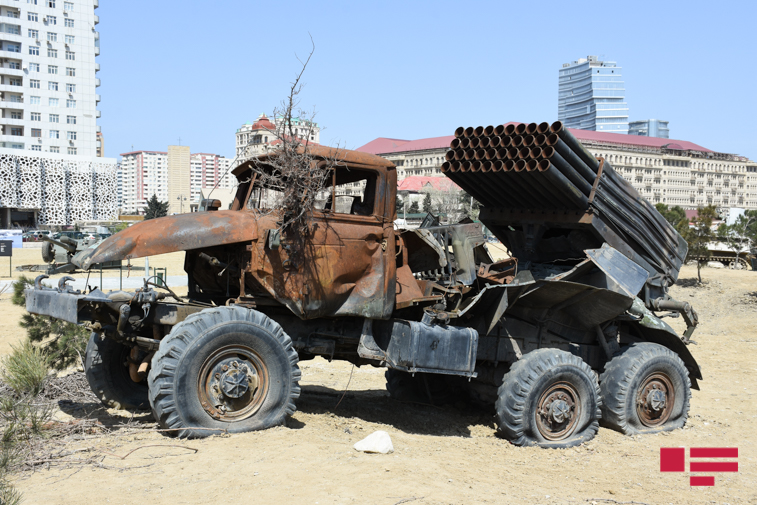 As you walk through the trenches, it is possible to get acquainted with the lifestyle of the enemy soldiers. Everything up to the Armenian plaques on the walls says "it's true." These waxworks, which are engraved with poverty and fear and despair on their faces, give the scene a bit of theatrical flavor, and this time there is a slight smile on the face of the audience anyhow, which I think every winning Azerbaijani deserves. As I saw these bearded, desperate soldiers hiding in the shelter, I remember an Armenian officer who gave an interview during the tense period of the war and who fled and hid when he heard the sound of our UAVs, admitted that they were afraid to pull his head out of the trench. That famous picture..., That ragged picture scaring of demons, or a picture consisting of old Armenians. Allegedly, they were coming to Karabakh to fight. How do these waxworks in front of me now look like those real "mummies"? 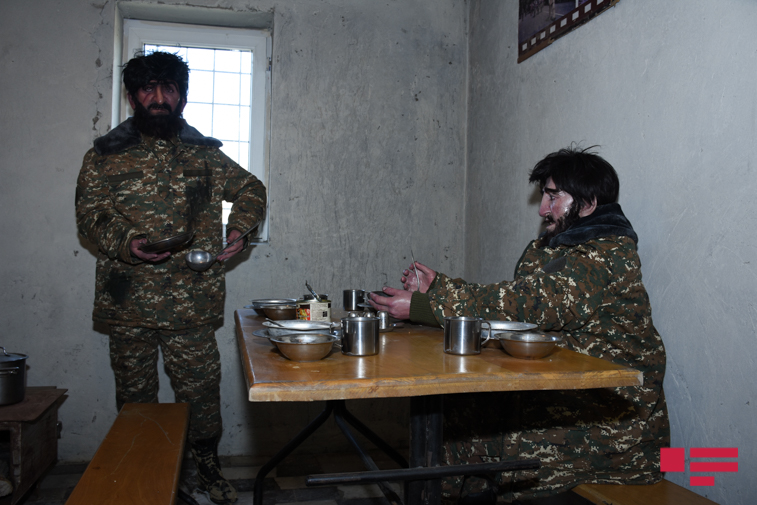 Expositions in the Military Trophies Park do not finish with these. How many exhibits we still can't talk about. You can write more about them, give more information. But no need… The best is to come and see with your own eyes. I can only hope. Let’s hope that the exposition of the park will be further enriched in the future. As well the creativity exhibiting now will be improved and the Military Trophies Park will not be only a place reflecting our successes of the Patriotic War, but will also find an important place in the field of art as a museum.
Because it deserves this… 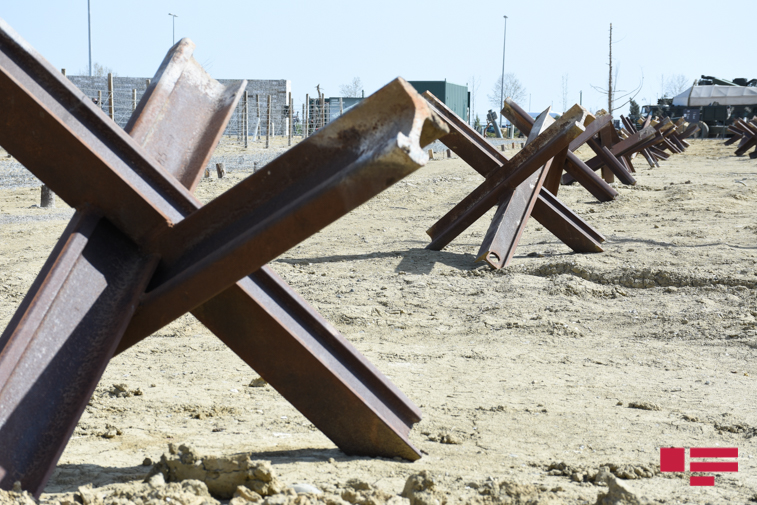 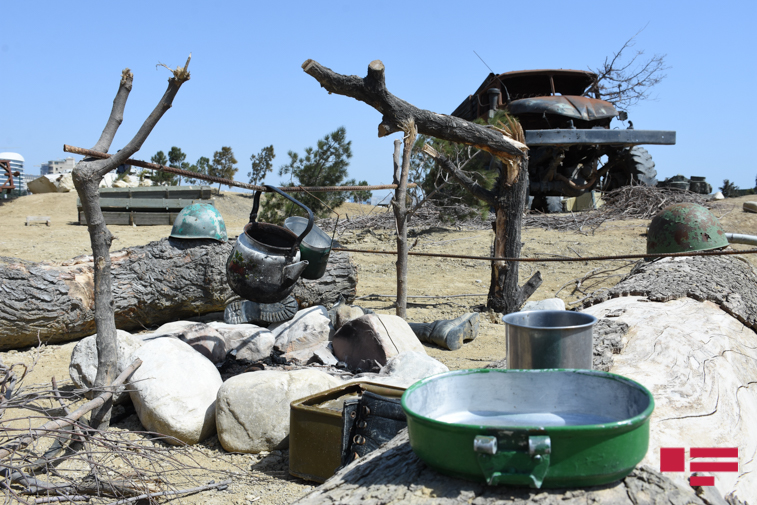 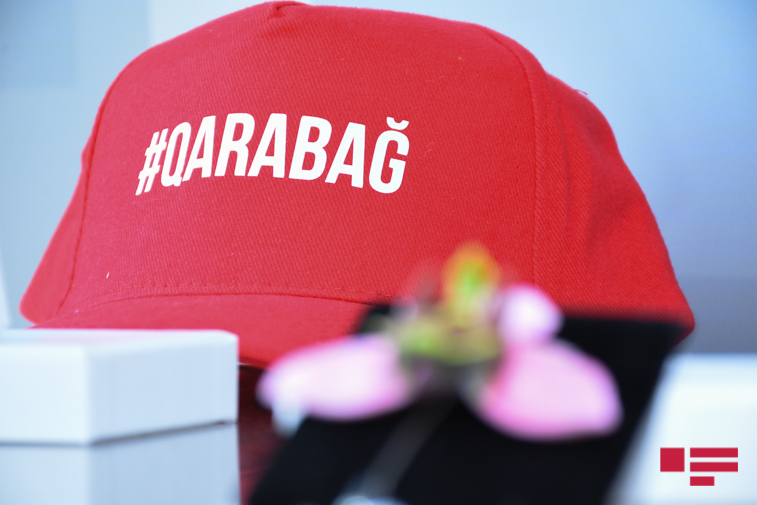 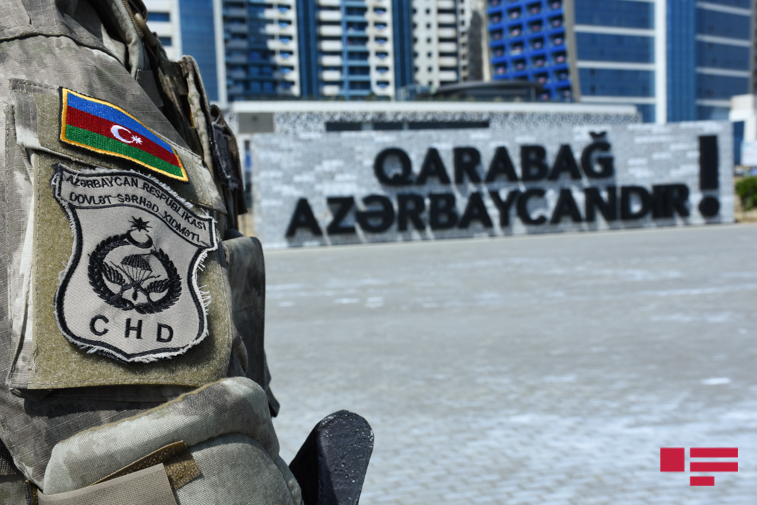