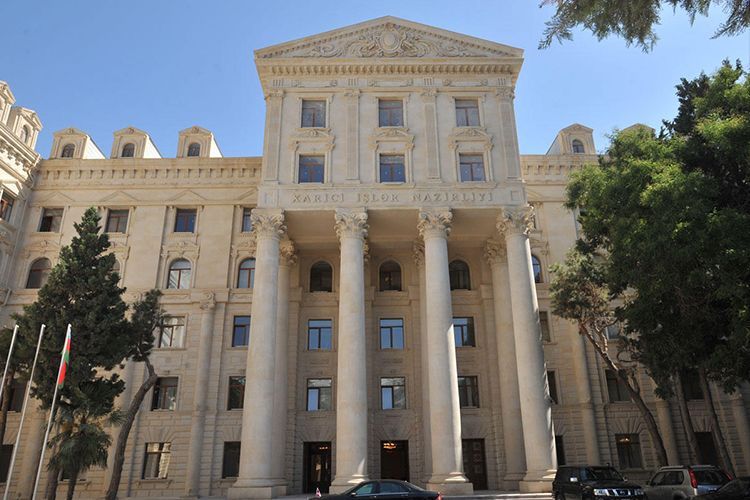 Minister Elmar Mammadyarov in his letter congratulated his colleague Rodolfo Nin Novo on the 25th anniversary of the establishment of diplomatic relations between the Republic of Azerbaijan and the Oriental Republic of Uruguay.

Elmar Mammadyarov noted that over the past 25 years, a solid foundation has been laid for mutually beneficial cooperation in many areas, including successful political dialogue, trade relations and cultural exchanges. It was emphasized that the establishment of permanent diplomatic representation of Azerbaijan in Uruguay since 2014 has contributed to further development of bilateral relations. Minister Elmar Mammadyarov noted that the establishment of diplomatic mission of Uruguay in Azerbaijan could also stimulate further development of cooperation in various fields, especially in the areas of energy, agriculture and tourism.

In the congratulatory letter, the position of the Oriental Republic of Uruguay on the settlement of the Armenia-Azerbaijan Nagorno-Karabakh conflict, expressed in the statement of the Ministry of Foreign Affairs of Uruguay of April 26, 2019 was highly appreciated.

Minister Elmar Mammadyarov expressed confidence that the joint efforts will be continued to further develop multidimensional relations in the future for the prosperity of both nations.

Foreign Minister of Uruguay Rodolfo Nin Novoa congratulated his Azerbaijani counterpart on the 25th anniversary of the establishment of diplomatic relations between the two countries.

Referring to the meeting with his counterpart Elmar Mammadyarov on the sidelines of the 5th World Forum on Intercultural Dialogue in Baku last May, Rodolfo Nin Novoa said that current bilateral relations between the two states continue to develop at the high level. Existing relations between the states demonstrate the friendship between our nations, based on common values and principles, and at the same time the opportunities to deepen our political, economic and cultural ties in the future.

In his letter Minister Rodolfo Nin Novoa also noted that Azerbaijan can be confident that Uruguay will remain committed to continuing constructive, pragmatic and responsible work for the prosperity of our nations.