Azercell: Our goal is to provide the population returning to Karabakh with the fastest mobile internet and advanced services - VIDEO 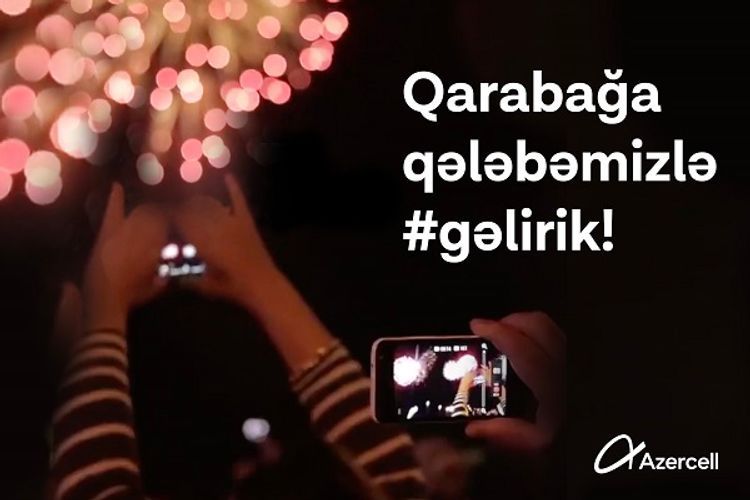 November the 10th, 2020, is the date to be etched on the memory of all the people of Azerbaijan. The glorious Azerbaijani army, under the leadership of the President of the Republic, Supreme Commander-in-Chief Ilham Aliyev, has put an end to 30 years of longing for our Motherland occupied by Armenia. Azercell Telecom sincerely congratulates all the people of Azerbaijan on this great day, which opens a new page in the history of our country.

Azercell Telecom’s goal for the present is to accelerate the rapid and full expansion of 4G network and to provide the population returning to Karabakh with the fastest mobile internet and advanced services.

It should be noted that despite the intensified and hectic work schedule during more than a month of clashes, the quality of service through all channels has been maintained at a high level as a result of the efforts of Azercell employees. Thus, according to the latest indicators, the number of appeals received through online channels has reached 100% response rate.

Azercell also conducted a campaign with the slogan #gəlirik for social media users to sustain a high level of solidarity and the spirit of victory, and express deep respect for the rich heritage of Karabakh culture. The campaign caused a great response among viewers. Thus, the video of # gəlirik campaign dedicated to Shusha became the most liked (more than 120,000 reactions) and most shared (more than 13,000 shares) video on social networks in Azerbaijan: https://www.facebook.com/azercell/posts/10158193722528303

It is worth noting that Azercell transferred 1 million manats to the Armed Forces Assistance Fund to support our National Army from the first days of the battles. In addition, the company provided communication support to all media workers sent to the frontline and residents of Barda and Ganja, who were subjected to Armenian provocative attacks.

Azercell Telecom will continue its efforts to ensure the prosperity and socio-economic development of our country and to establish the best communication in all territories of our Motherland.

Congratulations on our victory!