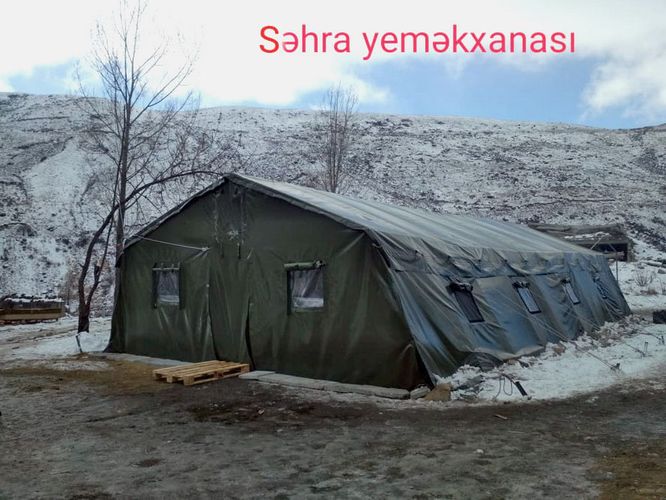 Under the leadership of the President of the Republic of Azerbaijan, the victorious Supreme Commander-in-Chief of the Armed Forces, Mr. Ilham Aliyev, the Azerbaijan Army conducted the "Operation Iron Fist" in the Patriotic War and liberated our territories from the enemy's occupation in a short period of time. Due to the iron will and strong determination of the Supreme Commander, as well as the unity of our people and the courage of the military personnel of our glorious Army, the 44-day war ended with the decisive victory of Azerbaijan.Currently, the Azerbaijan Army is deployed in new places, in mined territories with no infrastructure, which were under occupation for about 30 years and were completely destroyed and ruined. Along with other government agencies, the leadership of the Ministry of Defense orderly and purposefully carries out activities to improve the living conditions of the military units deployed in these areas.It is also necessary to consider that these works are carried out in high-mountainous areas, in rough high grounds in severe winter climate conditions, at the same time in an area corresponding to the geographical terrain of the forest-steppe. The new roads are laid out to military units, positions, and checkpoints, which were provided with power lines, water, and gas pipelines, all the necessary living conditions are created for the accommodation and service of military personnel.Under the order of the Minister of Defense, officials of the relevant structures of the Ministry are constantly alongside the military personnel, the needs are studied according to the conditions. In accordance with the norms of food and clothing supply servicemen are continuously provided with all types of logistic support. Tents, heating stoves, and other necessary equipment are additionally delivered to the units deployed in the field conditions.Movable bath and laundry services are organized in various areas, servicemen are provided with warm uniforms, bedding, and quality products. The personnel of military units located in mountainous areas is provided with additional high-calorie food rations in accordance with the standards. In addition, there are sufficient reserves in the depots.On the initiative of the First Vice-President of the Republic of Azerbaijan Mehriban Aliyeva, the delivery of a large number of food products to the military units deployed in the liberated territories is provided until today. Our people, various organizations, companies, and individuals who have joined this initiative are providing wide-ranging aids to our army today, just as they did during the war. Food, sweeties, personal hygiene items, and other belongings that are not included in the standards of food rations are delivered to our soldiers. The leadership of the Ministry of Defense once again expresses deep gratitude to the First Vice-President and everyone who supports the Azerbaijan Army.At the same time, military medical personnel in an intensive mode provide continuous medical services to pay constant attention to the state of health of servicemen. In accordance with the instructions, mobile field hospitals operate in several directions prior to the establishment of stationary military-medical points in the liberated territories.It should be noted that by the order of the Minister of Defense, several commissions consisting of specialists, carried out in a short time an inspection of the deployment of military personnel and the living conditions in the Army Corps. In general, no systemic problems in logistic support issues were found as a result of comprehensive inspections. However, minor shortcomings were identified and then were immediately eliminated. Some officials who showed negligence in the fulfillment of their duties and made mistakes were punished and appropriate measures were taken against them.However, videos damaging the reputation of the Azerbaijan Army and casting a shadow over our victory in the Patriotic War have been spread recently on social networks, which have purposefully got various biased comments. Thus, information about our Army that violates the relevant requirements of the Law of the Republic of Azerbaijan "On State Secrets" is spread and prejudiced information damages the reputation of our servicemen.Some social network users are even posting videos reflecting the dissatisfaction regarding the non-provision of servicemen with cigarettes. We declare that the relevant decree of the Cabinet of Ministers on the standards of food rations for the military personnel of the Armed Forces of Azerbaijan does not include the provision of military personnel with tobacco products. However, there are various types of cigarettes in the humanitarian aid provided by the state, which are delivered individually to each soldier consuming tobacco products.The Ministry of Defense, addressing the parents and relatives of servicemen, once again declares that issues of interest to them should be applied not through social networks, but by calling the ministry's telephone numbers (012) 912, (012) 538-61-31, (012) 404-76-34, which available 24 hours a day for their more efficient solutions.