Armenians demand from Ministry of Defence their missing ones in Karabakh 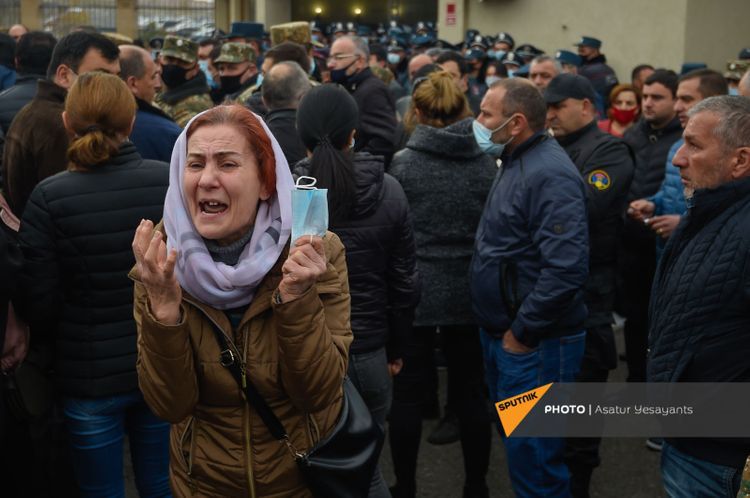 The parents and relatives of the servicemen missing in the war in Nagorno Karabakh have gathered in front of the building of Ministry of Defence in Armenia, APA reports citing Sputnik Armenia.

They want to be provided with information about the fate of their relatives. Protesters demanding a meeting with Minister of Defence David Tonoyan and the head of the headquarters Onic Gaspatyan look for the answer to the question on where their husbands, brothers and children are. Protesters are crying and wanting information about the whereabouts of their loved ones so that they can go in search of them. The building has been surrounded by the police, the protesters will not be allowed close.

“Where are our children? Return our children! Why their names are not in any of the lists”, Gagik Mhitaryan told journalists. His son was called up for military service in August of this year. G. Mhitaryan said although his son didn’t have necessary experience, he was sent to the forefront. Now, there is not any news from his son.

“We have repeatedly appealed to Ministry of Defense, the International Red Cross Committee, but nobody is found who can inform us about my son’s fate”, he said.

Meanwhile, another parent Artur Kirakosyan said it is not already possible to exercise patience: “There may be wounded soldiers on the territories passed into control of Azerbaijan, after all, it is possible to save them. There wasn’t any news from my son since October 10. Not only him but the whole camp went missing. They went missing in the area between Jabrail and Martuni. I heard many of them are alive. May be my son was taken prisoner, may be he is among wounded soldiers”.

Meanwhile, Ruzanna Saroyan said she is searching for her husband. She said her husband participated in the battles in the direction of Hadrut, she couldn’t receive any news from him for significant time.