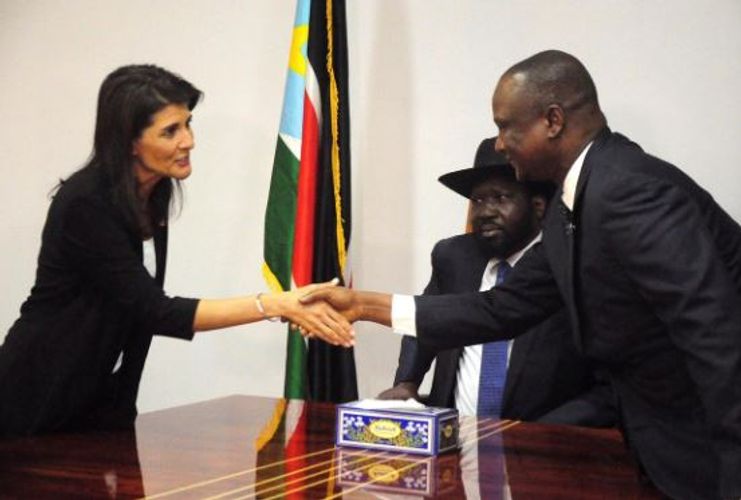 The Treasury Department said Gai arranged and directed the alleged killings of opposition politician Aggrey Idri Ezibon and human rights lawyer Dong Samuel Luak in a move to solidify his position in the government and intimidate members of the opposition.

South Sudan’s presidential spokesman Ateny Wek Ateny, told Reuters after the sanctions were announced that Washington’s move will worsen the situation in the country.

Gai “is very helpful in the implementation of the peace and...he should be encouraged,” the spokesman said, adding that there was no evidence that any government officials were involved in the killings cited by Treasury.

Gai, former governor of an oil-rich region in South Sudan, has long been a powerful government figure in the country with close ties to President Salva Kiir.

U.S. Secretary of State Mike Pompeo issued a statement calling on the government and opposition leaders to create distance from those who spoil the peace process. He said Gai, on behalf of Kiir, acted to “divide and sow distrust, extend the conflict in South Sudan, and impede the reconciliation and peace process.”

He is the latest South Sudanese official to be sanctioned by Washington. Last month, the United States blacklisted two South Sudanese cabinet ministers, days after slapping sanctions on five lower level officials it says are responsible for the likely murder of the two human rights activists in 2017.

The sanctions, implemented under the Global Magnitsky Human Rights Accountability Act that targets perpetrators of serious human rights abuses and corruption, freeze any of Gai’s U.S. assets and generally prohibit Americans from doing business with him.

Kiir and opposition leader Riek Machar signed a peace deal in 2018 to form the unity government by Nov. 12. But days before the deadline, the two leaders gave themselves an extension of 100 days to implement the agreement, a move criticized by Washington.

In November, the United States recalled its ambassador from South Sudan and said it was re-evaluating its relationship with the African country’s government.

Civil war broke out in oil-producing South Sudan in 2013, less than two years after the country gained independence from Sudan following decades of war. The conflict has killed an estimated 400,000 people and forced millions from their homes.