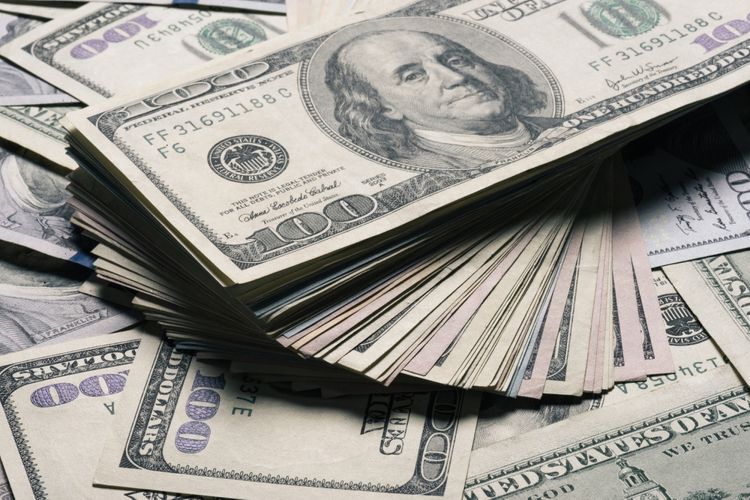 "According to the minimal scenario assessment, the cost of Armenia's military equipment, destroyed or taken as trophies by the armed forces of Azerbaijan during the Second Karabakh War amounts to 3.8 billion US dollars," said Head of the Department of Center for Analysis of Economic Reforms and Communication Ayaz Museyibov, APA-Economics reports.

"As a result of the 44-days war, the enemy lost 10 S-300 installations and their various tactical combat vehicles, 366 tanks, 352 guns of different calibers, 22 unmanned aerial vehicles, 5 Su-25 aircrafts, and 50 Tor, Osa, Kub and Krug anti-aircraft missile systems. At the same time, during the military operations, among the destroyed military equipment were 97 Grad installations, 4 Smerch installations, 2 Uragan installations, 1 TOS flamethrower, 1 Yars and Tochka-U, ballistic missiles, and Elbrus missile systems. After the destruction of radar stations and assets that play a significant role for providing special defense capability, as well as weapons and ammunition depots, Armenia's ability to fight was completely undermined.

The destroyed military equipment include the complexes that Armenia would not be able to acquire under any circumstances, taking into account its economic power, military capabilities and international law. S-300 systems, costing hundreds of millions of dollars, ballistic systems, the sale and use of which are prohibited, as well as the Elbrus missile systems can be emphasized as examples. Armenia's military spending for 2020 was approved at 716 million US dollars. However, in just 44 days, Armenia's military losses increased the country's annual military spending by 5.3 times. From this point of view, according to estimates of military expenses and economic indicators, through the current expenditures of the military budget, Armenia will need 38 years to rebuild the military infrastructure.

The cost of Armenia’s military equipment destroyed during the Second Karabakh War showed that Armenia grossly violated the terms of the "Treaty on Conventional Armed Forces in Europe", which provides for the reduction of armaments in Armenia. It also demonstrated that the amount of weapons and military equipment possessed by Armenia exceeded the limits. The fact that a country with a military budget of only 716 million US dollars has an arsenal worth billions of dollars is not economically justified. Thus, from the point of economic power, reserve assets of 2.32 billion US dollars do not allow Armenia to acquire those weapons. This again indicates that over the past 30 years Armenia has been armed illegally and free of charge. It is no coincidence that military equipment and funds donated to Armenia led to the cession of its wealth to third parties. Thus, as noted in the data of the US Central Intelligence Agency, the country, "stuck in a dead end," is completely dependent on third countries in the fields of energy, transport, logistics and critical infrastructure.

“Humanitarian aid” to Armenia, collected from the first day of the war through Hayastan and other funds, speaks of Armenia's weakness in waging a resource war. This also indicates that Armenia had no potential to wage war with Azerbaijan, and did not have independent economic and military power even under normal conditions. A forecasted economic decline of 7 percent for this year, defeat in the war, a serious food security problem, a demographic crisis, a raging pandemic, and an ongoing political crisis do not bode well for Armenia. According to the opinion of the Armenian intellectuals, a "humanitarian aid" of about 200 million US dollars and financial assistance from various countries will not be sufficient for a country "living one of the most disastrous days in its history". The establishment of normal relations with Azerbaijan and its ally Turkey is the only way out for Armenia, which will suffer from the “defeated country” syndrome for many years to come," he said. 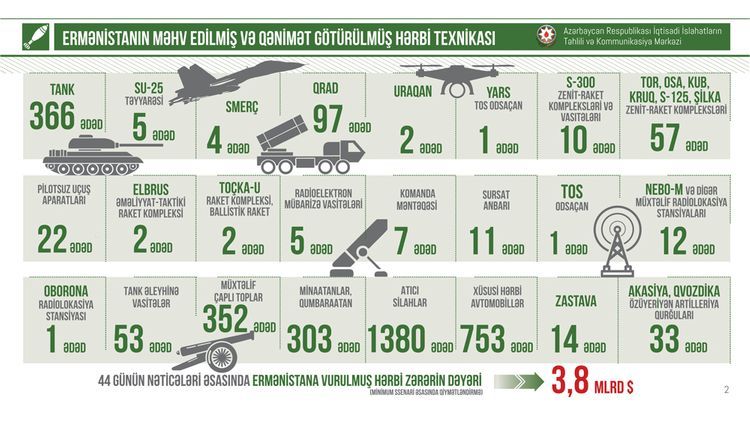 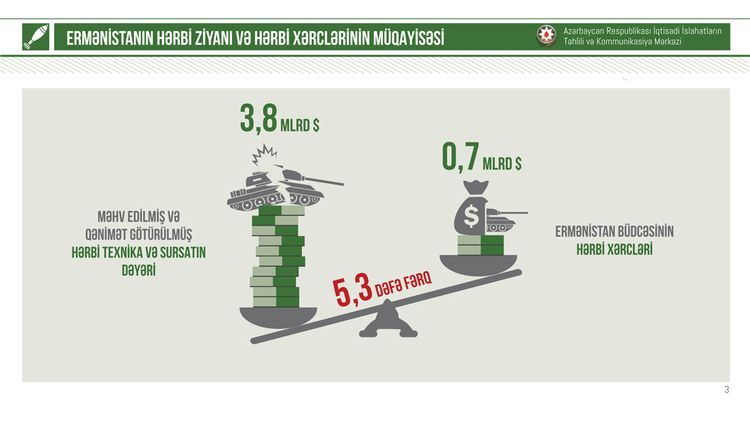 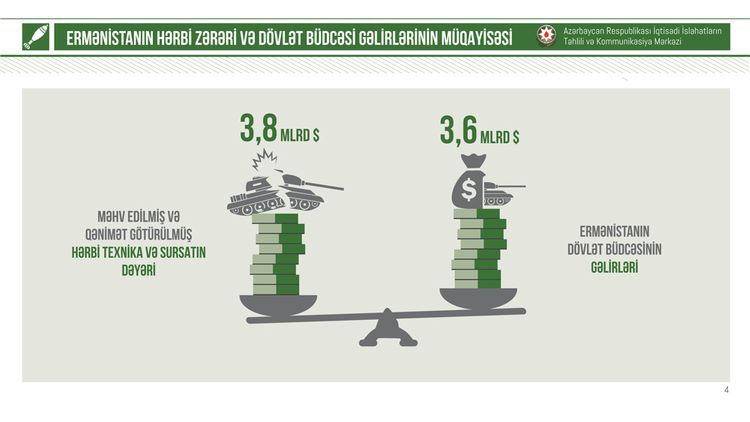