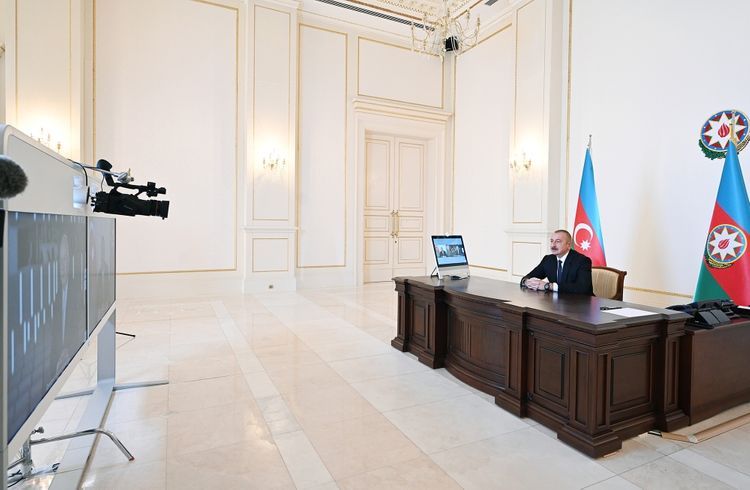 "On 27 September, Azerbaijan was subjected to yet another attack of the Armenian armed forces. This was not the first attack in the past three months. Something similar but on a smaller scale took place at the state border in July. That attack was repulsed. Then in August, a sabotage group was sent from the Armenian side to commit terrorist acts against the civilian population and against the military and the head of this group was detained and is now giving evidence", said President Ilham Aliyev in his interview to Director General of “Rossiya Segodnya International News Agency” media holding Dmitry Kiselev for Russian RIA Novosti agency, APA reports.

Head of our state said while speaking on Armenia's military provocations and war crimes that at the end of September, our settlements were also subjected to artillery fire, and in the very first hours we had casualties both among the civilian population and among the military. To date, we have 43 civilian deaths and more than 200 wounded, about 2,000 houses in villages and towns adjacent to the line of contact are either completely destroyed or damaged. Unfortunately, artillery shelling from Armenia have continued after the agreement on the parameters of a ceasefire was reached, including the barbaric bombing of the city of Ganja, as a result of which 10 civilians were killed and about 40 were wounded.

President Ilham Aliyev said that as for the losses on the battlefield, according to our data, the losses of the Armenian side are much higher than ours. We will announce our losses among servicemen after the active phase of the conflict. As for the results of the military action, they have been very successful for the Azerbaijani army. We have managed to break through the deeply echeloned defenses of the opposing side. In some areas, there were even four lines of defense. The mountainous terrain, of course, makes the defense much easier than the counteroffensive. To date, dozens of settlements have been liberated from the occupation, including the city of Jabrayil and most of the villages of Jabrayil district, the vast majority of villages in Fizuli district, and the settlement of Sugovushan, which is of strategic importance. We have driven the occupiers out of strategic heights on the Murovdag mountain range and continue our successful operation to restore the territorial integrity of our country.