Azerbaijani President: "The victory on the battlefield made it possible to liberate Aghdam district, as well as Kalbajar and Lachin districts, without firing a single shot and without anyone becoming a martyr" 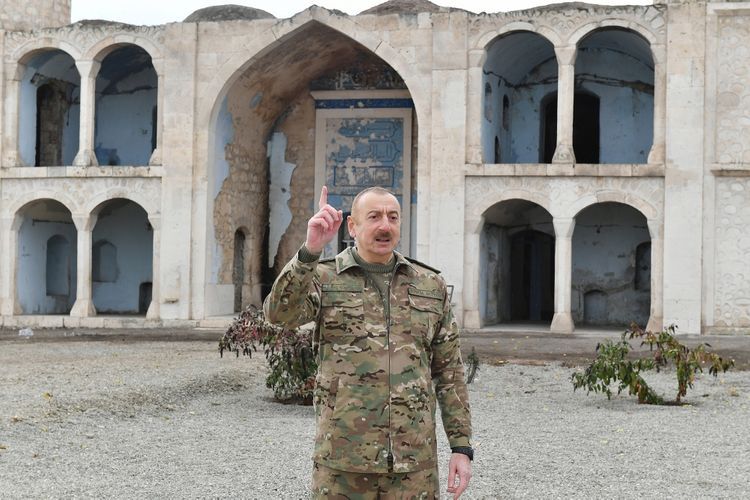 "As you know, the occupied city of Aghdam and Aghdam district were liberated on 20 November. I have congratulated the people of Azerbaijan, the people of Aghdam on this occasion. Today I am here, in the city of Aghdam. I visited the Aghdam mosque and raised the Azerbaijani state flag there," said President of the Republic of Azerbaijan, Commander-in-Chief of the Armed Forces Ilham Aliyev during his speech in front of Agdam mosque, APA reports.

"We have returned to Aghdam. I would like to once again congratulate all the people of Aghdam on this historic event. I know that the people of Aghdam have been looking forward to this day for many years. Both during the occupation, for about 30 years, and during the Second Karabakh War, the Patriotic War, they waited for Aghdam to be liberated from occupation. We have honorably fulfilled our historic mission and liberated the occupied territories from the enemy. The victory on the battlefield made it possible to liberate Aghdam district, as well as Kalbajar and Lachin districts, without firing a single shot and without anyone becoming a martyr.

We have returned to these lands at the expense of the lives and blood of the Azerbaijani people, our martyrs, and the courage of our heroes. We had to gather strength, and we did that. Over the past 17 years, I have repeatedly said to the people that we must be stronger and build a stronger army. The factor of strength plays a decisive role in the world today. Justice is on our side, international law is on our side, and strength should be on our side too. It was because we weren’t strong enough that Azerbaijani lands were occupied in the early 1990s. We were gaining strength and becoming stronger. I was saying that every citizen of Azerbaijan should bring this holy day, this day of victory closer with their work, with their hard work and devotion to the Motherland," said Azerbaijani President.