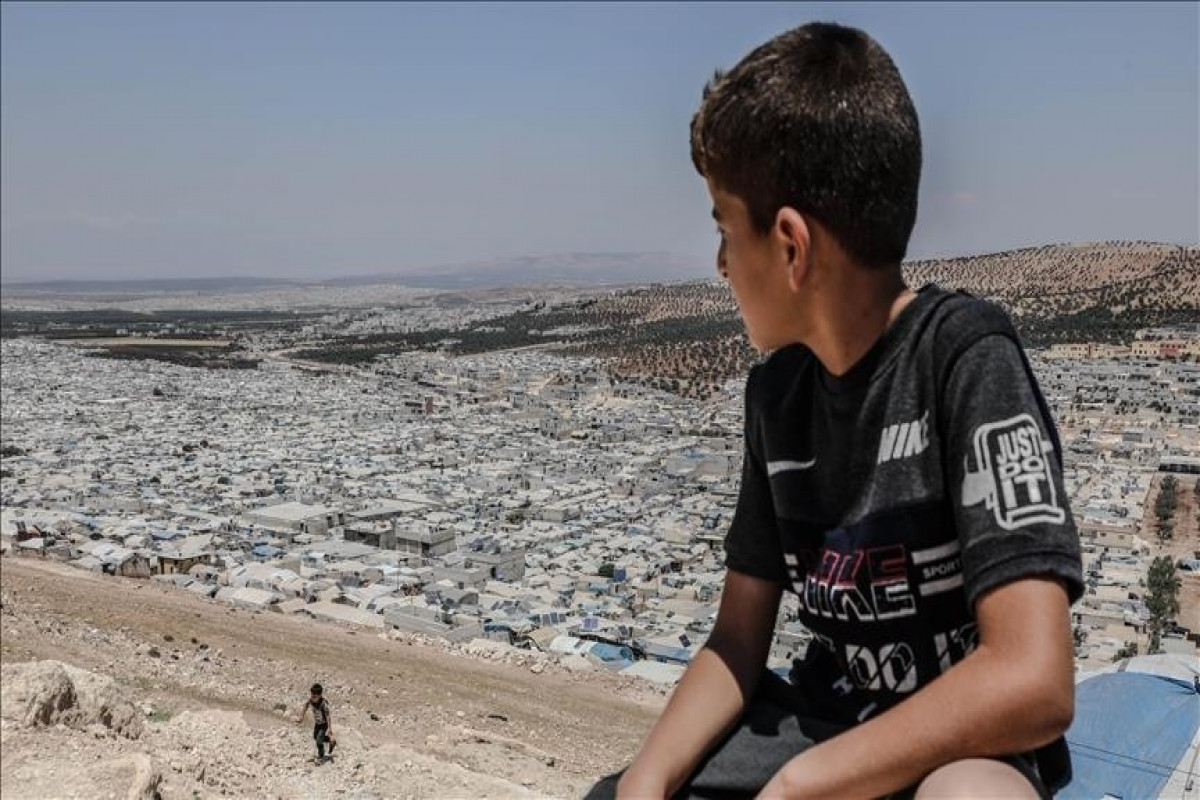 Civilians who took shelter in camps on the Turkish borderline of Idlib province in northwestern Syria face the risk of starvation, APA reports citing Anadolu Agency.

The woes of millions of civilians, who fled attacks by the Bashar Assad regime and its supporters, were raised after Russia wanted to prevent aid from entering the country only from the Bab al-Hawa, Syrian border crossing - Cilvegozu Border Crossing in the Turkish province of Hatay, in line with United Nations Security Council (UNSC) resolutions.

Civilians, mostly women and children, living in tents filmed by Anadolu Agency with a drone, want the vital UN aid to continue.

Ali Shami, who took shelter in the Atma Refugee Camp near the Turkish border in Idlib four years ago due to the forced evacuations in the Eastern Ghouta region of the capital, Damascus, told Anadolu Agency that Russia now wants to kill the civilian population by starving them after the attacks.

Stressing that Russia wants to close the border crossing from which humanitarian aid, albeit a little, comes, Shami said: "If the Bab al-Hawa Border Crossing, which is a breather for the people in the region as the Bashar Assad regime does not exist, is closed, millions of civilians will face starvation."

Stating that the UN should treat civilians and the oppressed fairly, Shami said, "Russia wants to starve the Muslim community."

Ahmet Abu Ratib, who was forcibly displaced from Eastern Ghouta after six years of the regime's blockade and took shelter at the same camp, said the last humanitarian aid door through which civilians could breathe should not be closed.

Reminding that civilians living in tents received food and medicine aid from Bab al-Hawa Border Crossing, Abu Ratib said, "civilians were sentenced to live in tents. Who wants to live on the top of the mountain in dust, soil, among snakes and scorpions."

Emphasizing that they are struggling to survive in difficult living conditions in tents, Abu Ratib said, "Russia wants to starve our children by closing the humanitarian aid gates as if it wasn't enough to kill them with warplane attacks."

He urged the UN not to leave the oppressed people alone.

Khalid Abu Muhammed, who was forcibly displaced and settled in the camp said, "Russia left children orphaned by attacks. They forcibly displaced civilians from their homes. Now they covet a bite of bread that will come from the Baba al-Hawa Border Gate."

He called on the UN not to leave the civilians living in tents alone and not to close the last humanitarian aid door.

Stating that Russia is using all its veto rights against the Syrian people, Abu Mohammed said, "Russia has devastated the people. It destroyed our homes. Our children have been orphaned. They want to close the door of humanitarian aid that comes to children with milk, food and medicine."

Noting that civilians living in tents have difficulty finding jobs, Abu Mohammed said, "the UN needs to take action to find a crumb of bread for the people struggling to survive."

Humanitarian aid has reached millions since 2014 through a mechanism authorized by UN Security Council resolutions that allow international aid to Syria.

In particular, people who have taken refuge in Idlib in northwestern Syria after being forcibly displaced rely on the aid.

By 2020, international humanitarian aid such as food, medicine, medical and hygiene supplies were sent through four border crossings, two of which were from Turkey.

The number of border crossings was first reduced to two upon Russia's veto and objections. Later, Russia only authorized Bab al-Hawa to be kept open for another year.

More than 1,000 humanitarian trucks cross the Bab al-Hawa border crossing into Syria every month but the mechanism that keeps the crossing open expires in July.

The Security Council needs to renew the mechanism so that the border crossing remains open and aid can continue.

The UN, international aid agencies, Turkey, the US and other Western countries want to increase the number of crossings where aid will be sent.

But China, which has sided with Russia in Security Council decisions on Syria, does not look favorably on keeping the Cilvegozu border crossing in Turkey's southern Hatay province open.

As before, Russia defended the argument that humanitarian aid should be provided from regime-controlled areas inside Syria, shortly before the expiration of the cross-border aid mechanism.

The only border crossing where more than 1,000 international humanitarian aid convoys are sent to Syria each month will be closed to aid crossings if Russia objects.

The US and Western countries in the UN also want the Bab al-Salam crossing across from the Oncupinar Border Crossing and the Al-Yarubiyah crossing between Iraq and Syria, which was closed in December 2019, to be reopened.

Syria has been ravaged by a civil war since early 2011 when the Assad regime cracked down on pro-democracy protesters.

Hundreds of thousands have been killed and more than 10 million displaced, according to UN estimates.

Idlib falls within a de-escalation zone forged under an agreement between Turkey and Russia. The area has been the subject of multiple cease-fire understandings which have frequently been violated by the Assad regime and its allies