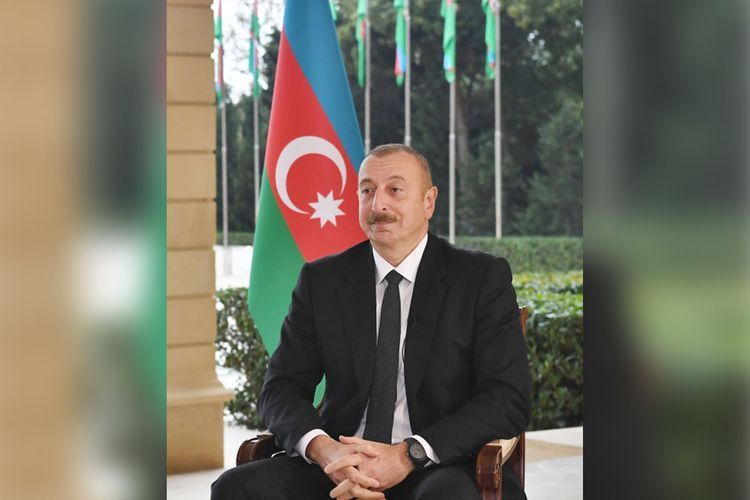 "Yes. Everything is used by our forces, not only Turkish drones, but Israeli drones and Russian military equipment and military equipment from other countries which we purchase and which we pay for, unlike Armenia which gets it free of charge. Everything is done by us," said President of the Republic of Azerbaijan Ilham Aliyev in his interview with BBC News on November 6, APA reports.

"Do you foresee a day when you might want Turkish direct military involvement? We have seen that Armenia has already gone to Russia, and said ‘what are you prepared to do?’ Do you see a day when you would be asking Turkey to become more involved?," addressed the question to the head of state.

"I don’t want to look to far ahead, because it will depend on the situation on the battlefield. It will depend on Armenia’s behavior, and on other countries’ behavior. Because on many occasions I said that we are against internationalization of the conflict, we asked all the countries, neighboring countries, and not neighboring countries to stay away from this conflict. We are fighting on our land, internationally recognized. So, this is our position. And I think that what is happening now will continue. So there will be no need for any kind of military involvement of Turkey. But, with Turkey, many years ago, we signed the document which provides also military support in case of aggression. So, with Turkey we have more or less the same format legal basis like Armenia and Russia has. So, if Azerbaijan will face an aggression and if Azerbaijan will see that the Turkish military support is needed, then we will consider this option," the President answered.

"I’m going to beg your assistance just for two more questions, President Aliyev, if I may.

What would you say to those who argue and I’m sure you’ve heard this argument being made that one of the reasons why the conflict has reignited now and why you are pursuing such a strong advance is because of this very strong backing from Turkey that this really has been the clincher for you," the journalist asked.

"No, not at all. And by the way, where is this Turkish military involvement? Who can verify that, who have seen any Turkish soldiers," the President asked.

"Not involvement on the ground, but the strong political support the constant statements, the very strong backing from a very strong regional power. Has that not been a factor in this?," the journalist noted.

"Yes. This is a factor, but this factor became very important after the conflict started. Because if you follow the chronology of the conflict, so, this statement started hours after Armenia attacked us and we pushed back. But Turkish political support to Azerbaijan has always been here. It is not just like it happened all of a sudden. It has always been like that. Why the conflict started? I can tell you, because Armenia wanted to disrupt negotiations. They launched an attack on us on 12 July, on the state border, and they entered our territory, we had to push back. And that clash lasted four days. And we stopped after we pushed them back from Azerbaijan and we did not cross the state border. Then in the middle of August, they sent a sabotage group, which crossed the line of contact, and the head of that group was detained, he confessed that they were planning terror acts against civilians. And then they started to shell our cities on the 27th of September, and we had the first victims in the early hours, maybe early minutes among civilians and among our military servicemen. They shelled us with heavy artillery. So, that’s how it started. Why it started?," the President stated.

"President, forgive me, because I know you wish to tell us the history. You mentioned the loss of military servicemen. Why is it that you are not releasing figures for your military losses are you concerned that support might wane if people knew how many young men are being killed in this war?," the journalist addresed the next question to the President.

"No, not at all. First, we don’t have many. If you how to say, look at the scale of the war, and the fact that we had to break those engineering constructions and all those positions which Armenians built for 30 years our losses are minimal losses. Of course, we cannot talk like that because every life of the human being is priceless. But we have much less losses than Armenians because our military capability is much better. And we have modern weapons which allow us to have minimum losses particularly those drones. Because without those drones all those tanks and guns would have killed so many people. So, it is not a reason because we think we will not have public support. On the contrary, those people who live there, close relatives, their sons, their brothers, they ask us not to stop. Can you imagine? I receive thousands of letters every day, thousands of letters, and in no one of those letters I saw that, stop. No. They say, I lost my son, I lost my brother, I lost my husband. Please go until the end. Please go until the end. Because our people have lived in this situation for almost thirty years," the head of the state said.