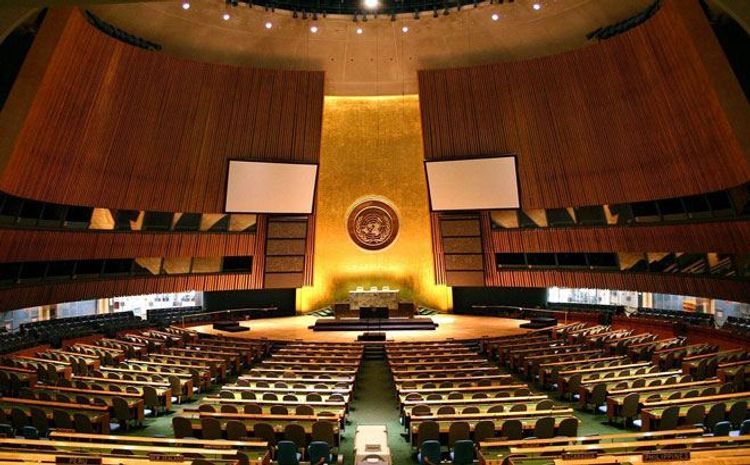 21 September 2020
United Nations, Sep 21 to commemorate the 75th anniversary of the UN, the General Assembly today is holding a high-level meeting, in which the virtual intervention of high dignitaries from around the world is expected, APA reports citing Prensa Latina.
On this occasion, the Secretary General of the United Nations, António Guterres, calls for the debate to be fostered and to offer broad visions about the future that is desired for the multilateral organization.

This commemoration seeks to generate renewed support for multilateralism, a more urgent issue than ever in the midst of the Covid-19 pandemic.

In Guterres' opinion, in a world with Covid-19, the UN is even more necessary.

The entire planet faces a crisis like we have not seen another in our lives and it is urgent to face it together, in a coordinated manner, stressed the highest representative of the United Nations.

Since its founding days, the Portuguese diplomat pointed out, the UN represents the main platform for multilateralism and international cooperation.

But the nature of multilateralism is changing and I have often stressed the need for a new, more interconnected and inclusive kind for the 21st century, he asserted.

For his part, the president of the General Assembly in its 75th session, Volkan Bozkir, stressed that Covid-19 is a crisis such as the world has not known since the UN was created, from the ashes of the Second World War.

At Monday's high-level meeting, member states are expected to adopt a declaration marking the 75th anniversary of the United Nations, which will express their commitment to a revitalized multilateralism.

In accordance with the provisions, UN authorities will be present in the plenary and will give their speeches there, such as the head of the General Assembly and the Secretary General, but most of the interventions will be made virtually.

After the declaration is adopted, the video messages of the speakers will begin to be presented and the first expected is from the President of the United States, Donald Trump, announced the spokesman for the head of the General Assembly, Brend Varma.

Due to the measures to contain the pandemic, this year for the first time in its history, the general debate of the Assembly will mostly take place virtually, without the presence of hundreds of high-ranking dignitaries, as is usual at this time.

Those attending the Assembly hall to present the pre-recorded videos will have to follow strict health and social distancing protocols.