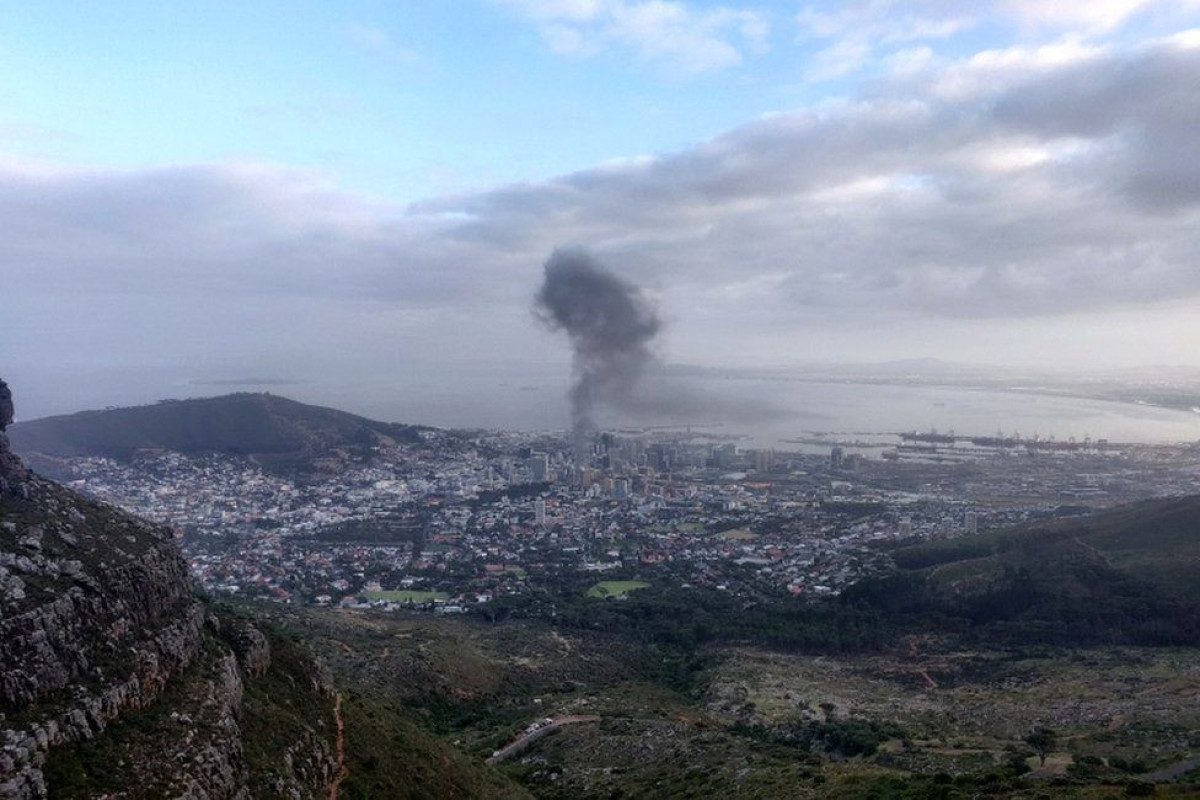 A man has been arrested after a large fire severely damaged the Houses of Parliament in the South African city of Cape Town, APA reports citing BBC.

The suspect, who is not a parliamentary employee, will appear in court on Tuesday, facing charges of arson, housebreaking and theft, police said.

Firefighters worked for hours to extinguish the blaze.

President Cyril Ramaphosa called it a "terrible and devastating event", as he vowed parliament's work would continue.

Footage from the scene on Sunday showed a plume of black smoke filling the sky, with huge flames coming out from the roof of the building.

Officials say the fire started on the third floor offices and quickly spread to the National Assembly (the parliament's lower house) chamber, reports the BBC's Nomsa Maseko in Cape Town.

The parliament is not currently in session because of the holidays, and no-one was injured.

However the building is home to thousands of treasures including historic books, photographs and important works of art. There is particular concern that the valuable Keiskamma Tapestry, which is 120m (394ft) long and documents South Africa's history, may have been damaged or destroyed.

Police say the suspect, who reportedly entered the building through a back window, is expected to be charged under the National Key Points Act, which protects sites of strategic importance.

It appears that private security used by the parliament in addition to police were not being paid overtime and were not on duty, Jean-Pierre Smith, a member of the Cape Town mayoral committee for safety and security, told the BBC World Service.

Parliament said some offices had been "severely gutted", and confirmed "significant damage" to the New Assembly Wing of the building, which includes the National Assembly chamber where lawmakers sit.

Mr Ramaphosa, who visited the scene, said news of the fire was a "terrible setback to what we were basking in yesterday".

He said the building's sprinkler system had not functioned properly, and praised firefighters for responding to the fire in minutes.

Mr Smith told reporters the roof above the old assembly hall was "completely gone" and further damage inside the old chamber had not yet been evaluated.

"It is not possible to see whether it's damaged. We hope it is not because it has so many historical artefacts, but you can't gain access to it without breaking the doors down and we don't want to do that," he said.

He also said that parliament's fire alarm had only sounded when firefighters were already on site. 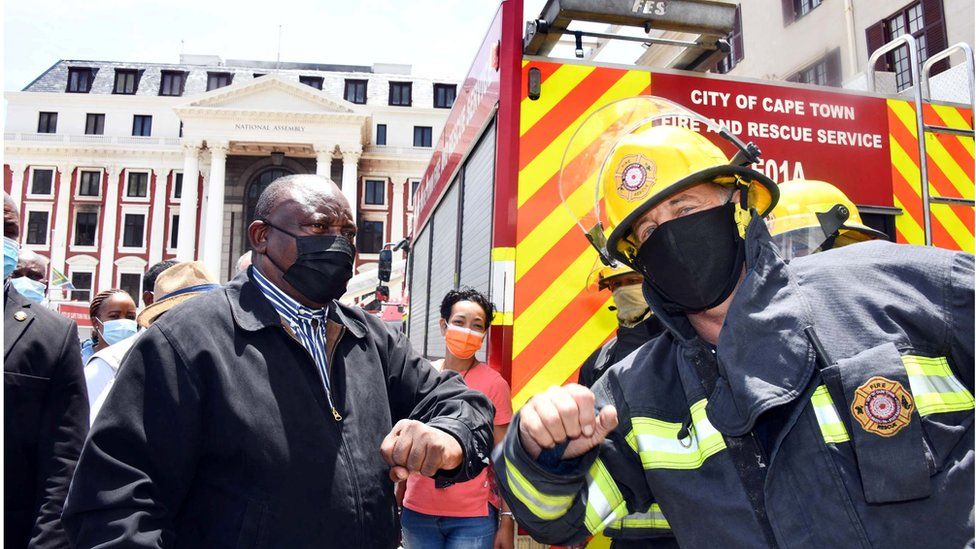 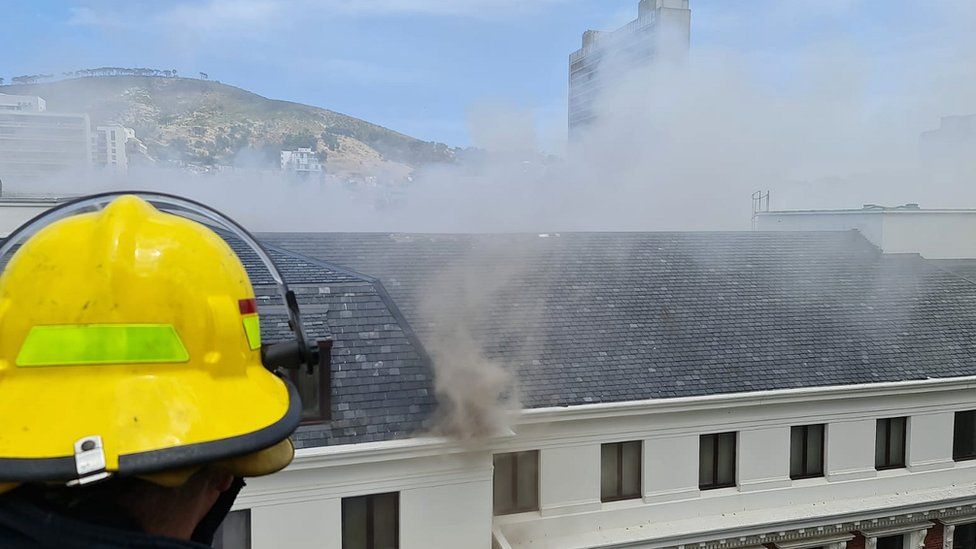 Fire and rescue service officials earlier said it would take hours to put the fire out completely because of the carpets and wooden floors in the building.

The damage from the fire can be seen in this image made available by the city of Cape Town: 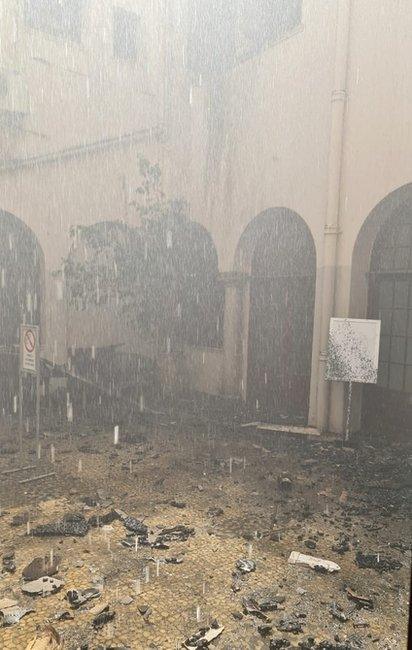 The Houses of Parliament in Cape Town are made up of three sections, with the oldest dating back to 1884. The newer sections built in the 1920s and 1980s house the National Assembly. Meanwhile, the government is based in Pretoria.

Mr Ramaphosa on Sunday spoke of his sadness at "this destruction of the home of our democracy".

Parliament said "all efforts" would be made to limit any disruption to its work.

Cape Town's Mayor Geordin Hill-Lewis said the city's Council Chamber would be made available as an alternative place for parliament to meet.

It was the second fire at the parliament in under a year. In March there was a fire caused by an electrical fault.

Last year, a fire ravaged part of the University of Cape Town's library, which was home to a unique collection of African archives.