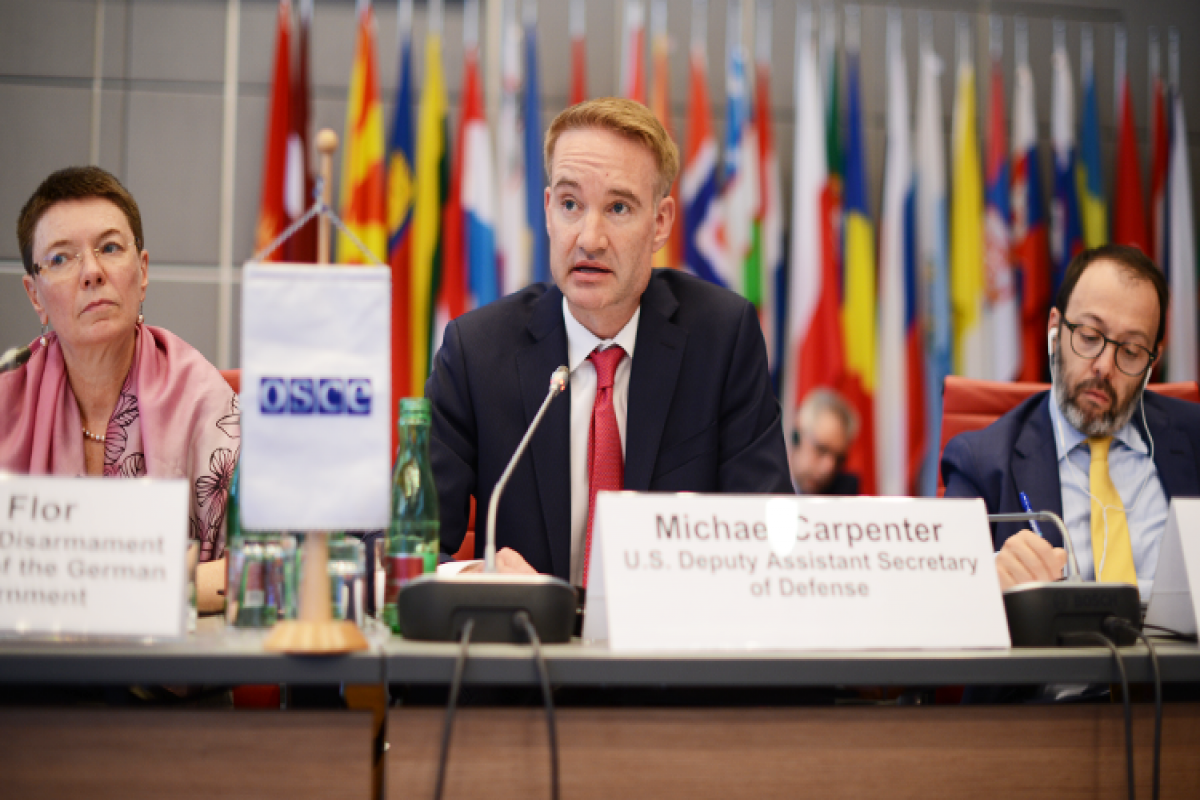 © APA | Michel Carpenter, head of the US Mission to the OSCE, Ambassador

"The United States warmly welcomes Foreign Minister Bayramov on the occasion of Azerbaijan assuming the FSC Chairpersonship.  Since this is my first appearance in this Forum, I would like to acknowledge the history and contributions of the FSC to comprehensive security in the OSCE region.  The 1992 Helsinki Summit Declaration envisaged the FSC as a negotiating and consultative body on political-military issues that would build trust and reduce the risk of conflict in the OSCE area. The FSC was mandated to convene “Goal-oriented dialogues and consultations aimed at enhancing security cooperation, including through the further encouragement of responsible and cooperative norms of behavior on politico-military aspects of security.”

Thirty years later as the FSC prepares to mark its 1000th session this February, we’re facing one of the most acute crises in European security in the post-Cold War era.  After invading and occupying Georgia in 2008 and invading and occupying Ukrainian territory in 2014, Russia is massing roughly 100,000 troops on the Ukrainian border today, and the numbers of these strike forces are increasing.  We are potentially on the brink of both a security crisis and a humanitarian catastrophe.  That is why, difficult as it might be to find a way forward, the United States is absolutely committed to pursuing a dialogue to build confidence and reduce the risk of conflict.

The United States fully endorses the OSCE Chair-in-Office’s call in the Permanent Council (PC) last week for a reinvigorated dialogue on European security.  The OSCE is the most inclusive venue for discussing concerns about conventional military forces and for enhancing military transparency, de-confliction and confidence building.  These are areas in which the FSC has made indelible and important contributions for three decades, including through its development of the Vienna Document, and a reinvigorated European Security Dialogue will rely heavily on the expertise that resides in this Forum.

The United States continues to hope that Russia will choose the path of diplomacy and de-escalation and that it will pull back its forces from Ukraine and sit down at this table where all 57 participating States have an equal voice to discuss how to enhance European security.  We are ready to give diplomacy a chance.

Diplomacy has the best chance of success in a climate of de-escalation, including of military forces, of rhetoric, and of activities below the threshold of the use of force, including those directed at de-stabilizing Ukraine and other participating States.

Mr. Chair, the Ukraine conflict will continue to be a key focus in weekly discussions in the FSC, as it is in the PC.  We welcome Azerbaijan’s FSC program of work and look forward to forthcoming security dialogues on core topics.  Some of the security dialogues, for example, on the role of non-aligned countries in the

European security architecture and on Arms Control CSBMs would help inform the broader European Security Dialogue.  Our verification agency and policy experts will contribute to the Annual Implementation and Assessment meeting for the Vienna Document.

We strongly support OSCE commitments on Small Arms and Light Weapons and Stockpiles of Conventional Ammunition (SALW/SCA) that will be the subject of the 1000th FSC plenary, and we are the leading donor to OSCE projects in this field as well as to humanitarian de-mining worldwide.  Since 1993, the United States has provided $489 million for conventional weapons destruction initiatives throughout the OSCE region, which has helped secure and safely dispose of at-risk conventional arms and munitions in 16 OSCE participating States. The FSC’s de-politicized work on SALW/ S-C-A has contributed to the security of the OSCE region for decades. Security dialogues on international humanitarian law, terrorism, and post-conflict rehabilitation should be geared toward enhancing security cooperation in accordance with the FSC’s mandate.

Finally, Mr. Chair, we look forward to the FSC-PC meeting on UNSCR 1325 on Women, Peace and Security, which is a cross-cutting issue since the full, equal and meaningful participation of women is integral to our work in this Forum and the OSCE as a whole.

Thank you, Mr. Chair and again congratulations.  We ask that you please attach this statement to the Journal of the Day," Michel Carpenter said.