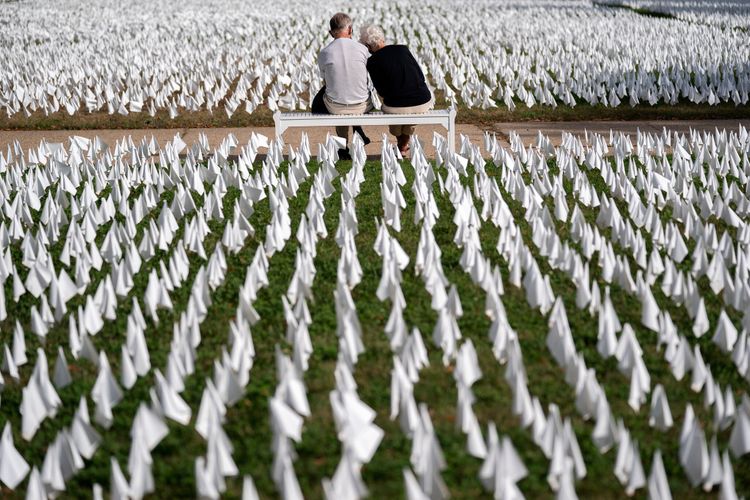 More than 132,700 new cases were announced across the United States on Friday. The country also reported more than 1,000 deaths for the fourth straight day, APA reports citing the NYT.

As the eyes of a tired nation remained transfixed on the results of the presidential election, the United States set a daily record for new cases for the third straight day, with more than 132,700 new cases on Friday. And it reported more than 1,000 deaths for the fourth straight day, the first such stretch since August.

The United States first reported a record of over 107,000 cases in a single day on Wednesday. On Thursday, it was over 121,000 new cases, another record, according to a New York Times database.

The country recorded more than 1,220 deaths on Friday. It was the first time over 1,000 deaths had been recorded for four consecutive days since Aug. 25-28.

In 27 states, there have been more cases announced in the past week than in any other seven-day stretch since the pandemic began. More than 54,800 people were hospitalized with the virus on Friday, according to the Covid Tracking Project.

Driven by surges in the United States and Europe, new daily cases have surpassed 605,000 globally for the first time and a harrowing 50 million total cases appears to be close on the horizon.

Across the continent, hospitals and health care systems are stretched thin, prompting fresh lockdowns and restrictions.

Portugal declared a new state of emergency on Friday. Romania, which passed 10,000 daily cases for the first time, announced that it would close schools and implement an overnight curfew. Poland reported a record 445 virus deaths on Friday and admitted the first patient to its new field hospital at a stadium in Warsaw.

As of Saturday morning, at least 1,242,600 people with Covid-19 worldwide had died since the start of the pandemic. Both new infections and deaths have risen more than 30 percent in the past 14 days.

The number of confirmed cases lags behind the true number of infections, though it is guesswork to say by how much. Countries around the world have worked to increase their testing capacity, but the new surges are straining even that in some places.

Germany, which had been lauded for its testing capacity early on, is tightening the rules governing who gets a test paid for by the public health insurers. Under new rules those with flulike symptoms are only eligible if they also belong to a high-risk group, or can prove contact to someone either infected or at high risk of becoming infected.

“Test, test test — but target,” read a government announcement released on Friday. In the first week of November, the country’s labs were able to handle nearly 1.6 million tests a day, but as the new cases rise and with more people becoming sick with seasonal flu, the system is under stress.

With a surge of coronavirus patients straining hospitals in El Paso, the Department of Defense on Friday sent three military medical teams to the Texas border city to assist with the care of patients.

Gov. Greg Abbott said in a statement that he welcomed the deployment of the teams — each made up of approximately 20 Air Force personnel — and said they would be “crucial to our efforts in reducing Covid-19 hospitalizations in El Paso.”

While most other areas of Texas have seen a slower rise in coronavirus infections in recent weeks, the state on Friday became the first to record more than 1 million coronavirus cases over the course of the pandemic, according to a New York Times database.

El Paso has been experiencing a rapid spread of the virus, reporting an average of more than 1,900 new cases a day. As of Friday, more than 1,000 people were hospitalized in the city and surrounding county of 700,000, and 18 new deaths were reported. More than 650 people have died since the start of the pandemic.

The number of hospitalizations has been sharply increasing since early October, as it has throughout the hard-hit areas of the central United States. The surge had already prompted the Texas Division of Emergency Management to create temporary medical facilities, including one at the El Paso Convention and Performing Arts center.

Federal military medical teams, which include doctors, nurses and respiratory therapists, have been deployed around the country to address urgent needs for medical staffing during the pandemic. Such teams were sent to cities in Texas in July, when Houston and Dallas saw huge surges in cases.

The teams were set to deploy to El Paso on Friday, a spokesman for the state emergency management division said, and would begin assisting doctors and nurses at three hospitals in the city over the weekend: the University Medical Center of El Paso, the Hospitals of Providence Transmountain Campus and the Las Palmas Del Sol Medical Center.

Lawyers for the attorney general, Ken Paxton, and the restaurant owners argued that the lockdown by the top executive in El Paso County, Ricardo A. Samaniego, violated an earlier statewide executive order by Gov. Greg Abbott, which prevented local governments from pursuing pandemic restrictions that were more stringent than those set by the state.

Mr. Samaniego’s order includes a 10 p.m. curfew as well as prohibitions on indoor-dining, all but essential travel and gatherings of any size outside of a household.

Restaurant owners have been particularly hurt in the pandemic, and a small group brought the initial case seeking an injunction. But the legal wrangling quickly grew into a clash between the county and the state when Mr. Paxton intervened. “Judge Samaniego’s unlawful order blatantly violates Gov. Abbott’s executive order,” Mr. Paxton said in a statement on Friday. “This oppression of the El Paso community must end.”

Such a legal conflict between state and county officials over emergency powers had not been adjudicated before, said the judge in the case, William E. Moody. But while there was no legal precedent, the judge said on Friday, there was historical precedent.