Azerbaijani President: Our relations with Turkey have a great history but even brighter future 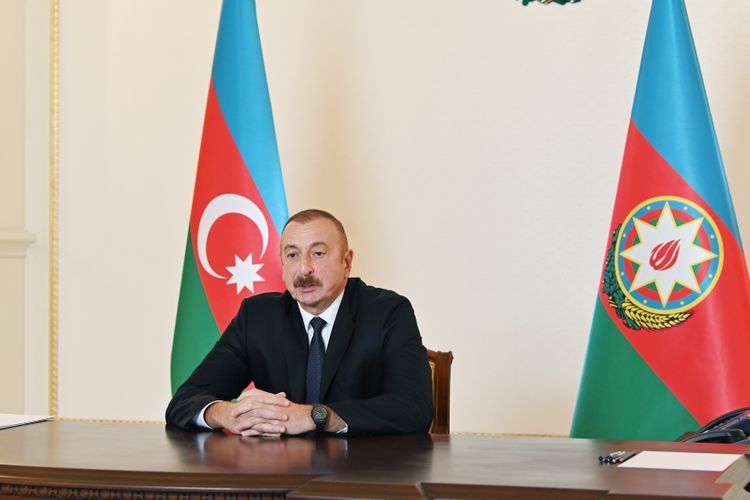 "Turkey and Azerbaijan are brotherly countries. And our brotherhood have been tested in many circumstances," said Azerbaijani President Ilham Aliyev in his interview with the French Le Figaro newspaper, APA reports.

"And in this particular case, Turkish President expressed publicly strong support to Azerbaijan. He said that Azerbaijan is not alone. Turkey is side by side. So, this is a very strong political support and we are very grateful for that. This is first thing. Second, what I want to say that what we are doing on the battlefield we do ourselves. Yes, with modern weapons, with modern equipment but it is Azerbaijani soldiers and officers who liberate our motherland. Our relations with Turkey have a great history but even brighter future. Turkey as a country which is the only country in the world having a border with all the three republics or countries of Southern Caucasus- Azerbaijan, Georgia, and Armenia, has, I think, a legitimate right to be involved in this process. Because as a neighbor, as a country which can provide and provides stability, predictability for the region and as a country whose agenda is very clear they defend international law. International law says that our territories are under occupation. So, what wrong do they do? They just demand international law to be implied. Armenia doesn’t want to do it. They want to keep our lands for more than thirty years under occupation by illegal settlement of Armenians from Lebanon, by military operations against Azerbaijanis, by destroying our historical and religious heritage. Turkey’s role is very positive. And after the war with Armenia stops, and political settlement is enforced, I am sure the role of Turkey will be very important and very positive," said the President.

Responding to the question "So, you don’t think that Turkey has a plan to erase Armenia in order to have a direct connection to the Turkish people of Central Asia." President said that "No, this is again, Armenian phobias, and Armenian provocations. In the peaceful plan which I was discussing with leaders of Armenia before Pashinyan came to power, there was a clear reference to communications. After the peace agreement is signed, all communications are opening, including communication between Nakhchivan Autonomus Republic of Azerbaijan and the mainland of Azerbaijan. And thus, Turkey and Azerbaijan and Central Asia will have a land connection. Today we don’t have it. But Turkey still has connections through Azerbaijan. We built couple of years ago Baku-Tbilisi-Kars railroad. So, Turkish goods through Georgia, Azerbaijan, Caspian go to central Asia and backwards. But the road from Turkey, Nakhchivan, Armenia and Azerbaijan is shorter. So, it is not the fact that Turkey does not have this connection. And as you say, somebody thinks that they will erase Armenia to have it. They have it. We have it. We will have another one. But it is again part of the peace plan. All communications will be open. And I think that Armenian government should not try to frighten its population with Turkey. And should stop this hatred towards the Turkish and Azerbaijani people."