Military expert: "From use of unmanned drones in real battles in this scope point of view, the US and Israel can not be compared to Azerbaijan either" 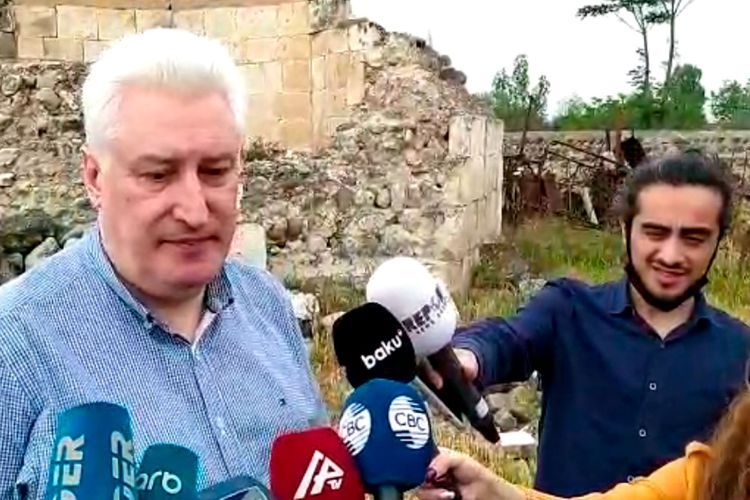 "From military point-of-view, "Iron fist" operation is a military operation of the 21st century based on high technologies," said Chief editor of Russia's "National Defense" magazine, military expert, Igor Korotchenko, who is on a visit to Aghdam today, APA's bureau in Karabakh reports.

Igor Korotchenko said that Azerbaijani Army fought against an enemy, which was prepared well: "The enemy established several defense lines almost during 30 years. The defense line was considered impassable for Azerbaijani Armed Forces in Yerevan. But we saw a new example, a new technological war of the 21st century. Azerbaijani Army achieved to gain an amazing victory in the 21st century. Today the operation of "Iron fist" is studied in military academies of different countries. The US, Great Britain, France, Russia, the Arabic world study this military operation. There is not an analog of the "Iron fist" operation, in which Azerbaijan used modern weapons. From use of unmanned drones in real battles in this scope point of view, neither the US, nor Israel can be compared to Azerbaijan. Certainly, this victory has firstly been achieved thanks to Azerbaijani President, Supreme Commander-in-Chief of Azerbaijan Armed Forces Ilham Aliyev. Azerbaijan's victory in the Second Karabakh war under the leadership of President Ilham Aliyev was the main military-political event in the world of last year. Azerbaijan's victory is main military-political event of 2020. No one, even Armenian provocateurs can not dispute it. There were 10,000 deserters in the Armenian army during the war of 44 days. It is also an unseen case in modern military history itself.  Azerbaijan gained victory thanks to its will, determination, better economy, and politics. No doubt, it was also a fight of leaders. There was dignified President Ilham Aliyev, one of the modern world leaders in the background of pity Nikol Pashinyan, who was lost, fell into hysterics and surrendered. Azerbaijan is approached in many capitals of the world as a friendly country, which is respected, relied upon. Because Azerbaijan is a fully sovereign country in the adoption of important political decisions. Today number of such countries is very few. Azerbaijan is just one of them."