President: After the end of the occupation, the Armenian and Azerbaijani population of Nagorno-Karabakh should live together 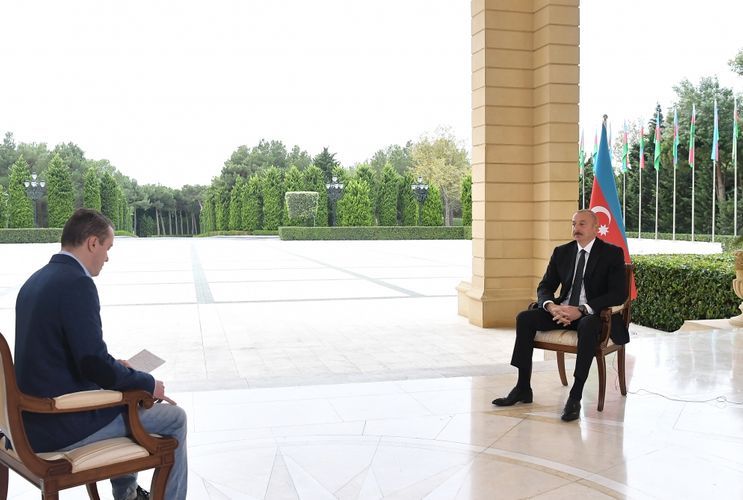 "I have also repeatedly spoken on this topic before and during the escalation. As recently as yesterday, in an interview with a Turkish TV channel, I said that we consider the Armenians living in the territory of Karabakh our citizens. And we believe that after the settlement of the conflict, after the end of the occupation, the Armenian and Azerbaijani population of Nagorno-Karabakh should live together, as has been the case for many years," said President of the Republic of Azerbaijan Ilham Aliyev in his interview to the Russian “Perviy Kanal” television, APA reports.

Ilham Aliyev noted that when the conflict began in the late 1980s, 75 percent of the population in Nagorno-Karabakh was Armenian and 25 percent Azerbaijani: "The city of Shusha, where they held the so-called "inauguration" of the leader of the criminal regime and insulted the Azerbaijani people, consisted of the Azerbaijani population by 98 percent. The city of Shusha was founded by the Azerbaijani Panahali Khan. This is an ancient Azerbaijani city from which all Azerbaijanis were expelled. So after the end of the conflict, after a peaceful settlement, which, by the way, is reflected in the fundamental principles, the so-called Madrid principles, the Azerbaijani population should return to the occupied territories. It is explicitly stated that all displaced persons have the right to return to their places of residence. Thus, after a peace agreement is reached, and I hope that this will happen, the Azerbaijanis will return to Nagorno-Karabakh and will live where they used to live. My position has always been that we must return to the atmosphere that existed before the start of the conflict in the late 1980s. I think it is possible. It will not be easy after what the Armenian executioners did in Khojaly, having exterminated the civilian population, destroyed our historical and religious sites and erased the historical heritage of Azerbaijanis from these territories. It will not be easy. But I believe that we should strive for this. And my appeal to the people of Armenia and to those who live in Nagorno-Karabakh now was repeatedly expressed during the hostilities. I called on the Armenian people to reason their government. I called on Armenian mothers not to send their children to the occupied territories. It is probably no secret for anyone that the so-called army of Nagorno-Karabakh does not exist. What is called the army of Nagorno-Karabakh consists by 90 percent of the citizens of Armenia. I made these calls. I have not heard such calls from the Armenian side these days – apart from hatred, apart from aggression, apart from threats and apart from completely inappropriate actions. Our position is that we are in favor of a peaceful settlement of the conflict. I am confident that if there is political will on the part of Armenia, we will be able to achieve this."