Azerbaijan FM: A sabotage group consisting of 62 Armenian citizens detained as a result of the anti-terror operation in Khojavend 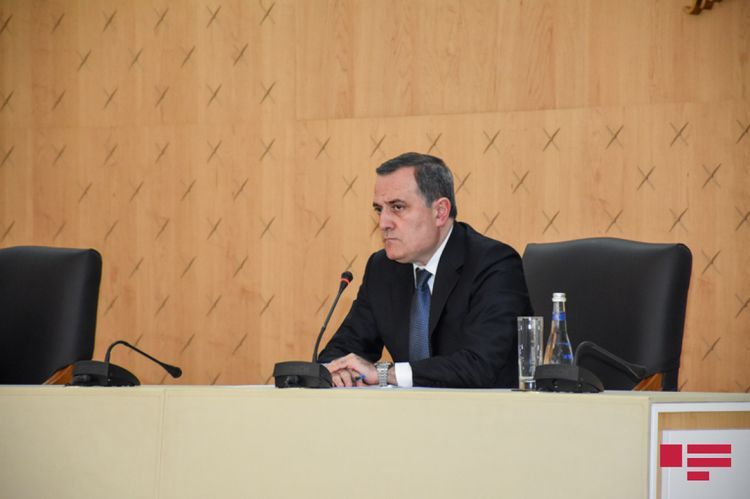 A letter, addressed by Minister of Foreign Affairs of the Republic of Azerbaijan Jeyhun Bayramov to the UN Secretary-General Antonio Guterres, on the activity of Armenia which aimed at violation of stability contradicting to international law and the trilateral statement dated November 10, has been published as a document of UN General Assembly and Security Council, press service of the Ministry of Foreign Affairs (MFA) told APA.

"I am writing to share the following on the developments with regard to elimination of consequences of the conflict between Armenia and Azerbaijan on the basis of the trilateral statement signed by the leaders of Azerbaijan, the Russian Federation and Armenia on 10 November 2020. The trilateral statement commits both Armenia and Azerbaijan to cease all military activities while taking a series of steps aiming at elimination of the decadeslong conflict.

Azerbaijan attaches vital importance to full implementation of the document, both in letter and in spirit, for the normalization of inter-State relations between Armenia and Azerbaijan and healing the wounds of the bloody conflict. Following the statement, Azerbaijan embarked on a large-scale plan for rehabilitation, reconstruction and reintegration of all its conflict-affected territories, including those inhabited by its citizens of Armenian origin, which is currently under the control of the peacekeeping contingent of the Russian Federation.

The Government has already initiated practical steps to remove the harsh consequences of the military occupation of territories with a view to enabling a safe and dignified return of all displaced populations to their places of origin and restoring the peaceful co-existence of all its citizens affected by the conflict within the sovereignty and territorial integrity of the Republic of Azerbaijan. Azerbaijan is resolute to reintegrate its citizens of Armenian origin residing in conflict-affected territories into its political, social and economic space, guaranteeing the same rights and freedoms to all the citizens of Azerbaijan, regardless of their ethnic or religious affiliation.

The Constitution of the Republic of Azerbaijan provides a solid legal framework in this regard. Against this background, Armenia’s continuous destabilizing actions cause serious concern, which, if not reversed, run the risk of threatening the realization of the vision of peace, cooperation and development envisaged in the trilateral statement.

Thus, as a result of a joint anti-terror operation of the State Security Service and the Ministry of Defence of the Republic of Azerbaijan conducted in areas recently liberated from occupation, a sabotage group of the armed forces of Armenia was taken. Sixty-two members of the group were detained and are currently subject to investigation procedures by relevant State institutions of Azerbaijan.

Initial interrogation reveals that the group, all members of which are citizens of Armenia, mainly from Shirak province, and conscripted to the armed forces of Armenia, was deployed in the Lachin district of Azerbaijan in late November, before its return to the control of Azerbaijan on 1 December 2020, under the trilateral statement.

Following the return of Lachin into Azerbaijani control the group was dislocated into areas deeper inside territory of Azerbaijan to organize terrorist activities against the military personnel of the Armed Forces of Azerbaijan and civilians engaging in post-conflict rehabilitation and reconstruction activities in the areas concerned.

Five military servicemen of the Armed Forces of Azerbaijan and one civilian personnel member of an Azerbaijani mobile telecommunication company were killed, and two more servicemen were wounded, as a result of a series of terrorist attacks conducted by the sabotage group in the liberated areas of the Khojavand district.

Deployment of an armed unit by Armenia into the internationally recognized territories of Azerbaijan is yet another blatant breach of Armenia’s obligations under international law to respect the sovereignty and territorial integrity of States and refrain from the use of force. The fact that the sabotage group was deployed to the territory of Azerbaijan after the signing of the trilateral statement is a gross violation by this country of its commitment under the statement to cease all military activities and withdraw its armed forces from territories of Azerbaijan, and raises serious questions about the sincerity of Armenia to fulfil its commitments.

The actions of the above-mentioned nature demonstrate that the real intention of Armenia is to escape from the implementation of measures reflected in the trilateral statement and undermine the ongoing efforts for restoring peace and security in the region after a decadeslong bloody conflict. Such a serious blow to efforts aimed at stabilization of the situation on the ground must be unequivocally condemned by the international community. It is in this context that I appeal to you with an urgent request to take all measures at your disposal to persuade Armenia to refrain from such destabilizing activities and withdraw all its armed forces from the territories of Azerbaijan.

It is our firm belief that the international community, led by the United Nations, has an important role to play in supporting the implementation of the trilateral statement, which promises restoration of good neighbourly relations in the region. For this to become reality, the revisionist attitude by Armenia needs to be abandoned.

All efforts must be directed towards taking advantage of chances that emerged as a result of signing the trilateral statement to normalize inter-State relations between the Republic of Azerbaijan and Armenia on the basis of respect for each other’s sovereignty, territorial integrity and inviolability of international borders. Azerbaijan remains committed to the promotion of peace and security on this basis and counts on the support of all its international partners, including the United Nations. "

Works are underway for gasification of Shusha and Agdam

Azerbaijan’s revenues from oil export increased by more than 40%

Chair of CBA reveals level of inflation for this year

Armenia records 3,536 coronavirus cases over the past day

Armenian Deputy PM: “There are positive points between Yerevan and Baku on railway”

48% of population not vaccinated in Azerbaijan

Distribution of COVID-19 infection in Azerbaijan by age category announced

One more school in Baku switched to distance education