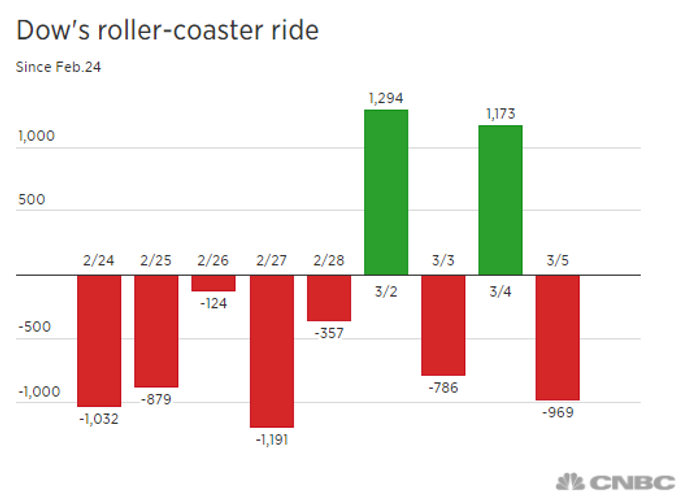 Stocks cratered on Friday, extending the deep rout in the previous session, as Wall Street edges close to the end of a tumultuous trading week, APA reports citing CNBC.

The Dow Jones Industrial Average dropped 764 points at Friday’s open, the S&P 500 and the Nasdaq Composite fell 2.5% and 2.8%, respectively.

Stocks remained sharply lower even after a blowout jobs report. The U.S. economy added 273,000 jobs in February, beating expectations of 175,000 new payrolls last month. The unemployment rate also fell back to 3.5%, matching its lowest level in more than 50 years.

Friday’s declines came as the benchmark 10-year Treasury yield tumbled below 0.7% for the first time ever. Investors continued to seek safer assets amid fears that the coronavirus will disrupt global supply chains and tip the economy into a recession. Another haven asset gold is on track for its best week since 2008.

It has been a roller-coaster trading week on Wall Street, as the 30-stock Dow swing 1,000 points or higher twice within three days. Friday’s declines extended a deep rout for stocks, adding to a 969-point loss for the Dow in the previous session.

“The magnitude of the sell-off in the S&P 500 so far has further to go,” Binky Chadha, Deutsche Bank’s chief equity strategist, said in a note. “In terms of duration, just two weeks in, it is much too early to declare this episode as being done.”

The expanding health crisis kept investors on edge as global cases of the coronavirus infections surpassed 100,000 with at least 3,383 deaths around the world. In the U.S., at least 12 people have died of the disease. California has declared a state of emergency, while the number of infections in New York reached 22.

President Donald Trump on Friday signed a sweeping spending bill of a $8.3 billion package to aid prevention efforts and research to quickly produce a vaccine for the deadly disease.

Treasury yields saw sharp declines this week after the Federal Reserve announced an unexpected 50 basis points cut from its benchmark interest rate. It was the central bank’s first such emergency move since the financial crisis more than a decade ago.

The Dow posted its second-biggest point gain on Wednesday as major wins from former Vice President Joe Biden during Super Tuesday sparked a relief rally, especially in the health-care sector. However, these sharp gains were erased quickly as coronavirus fears continued to grip Wall Street.