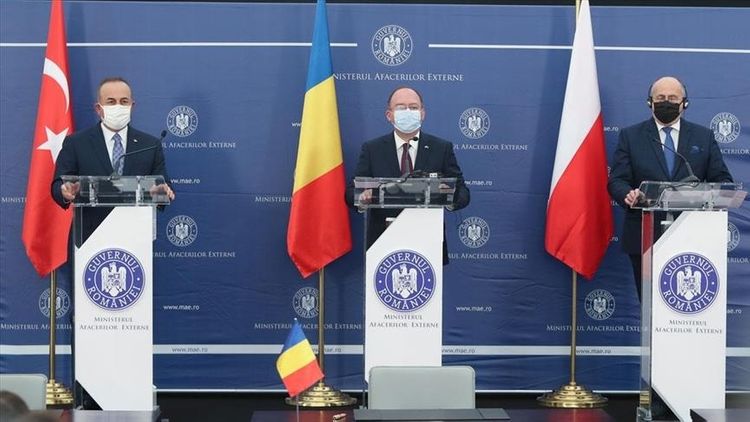 Cavusoglu arrived in Romania's capital Bucharest on Thursday, and attended a joint news conference with his Romanian and Polish counterparts following a trilateral meeting on Friday.

The Turkish foreign minister began his remarks by expressing his thanks to Romanian Foreign Minister Bogdan Aurescu for organizing the meetings on Thursday and Friday, recalling that the two officials had addressed a panel on 10 years of strategic partnership at the Romanian diplomatic Institute.

"Our relations set an example for the whole region," said Cavusoglu, noting that he was received by Romanian President Klaus Iohannis and that he had extended "the warm wishes of my (Turkish) President Recep Tayyip Erdogan."

Telling that the "Trilateral Meeting of Ministers of Foreign Affairs of Turkey, Poland and Romania" is not a forum for discussions only, Cavusoglu said: "It produced many cooperation projects as well. And today we exchange ideas on the recent NATO foreign ministers meeting, and the upcoming NATO Summit in June."

"Today I stressed the importance of unity and solidarity," he added.

Stressing that "the Black Sea region is our common home," the Turkish minister said: "We must make sure this region is kept away from tensions. We are all concerned about recent developments in and around Ukraine. However, we are getting promising news recently, and we hope dialogue and diplomacy will prevail."