Azerbaijani President: "Armenians living in Nagorno-Karabakh can be sure that their security will be ensured" 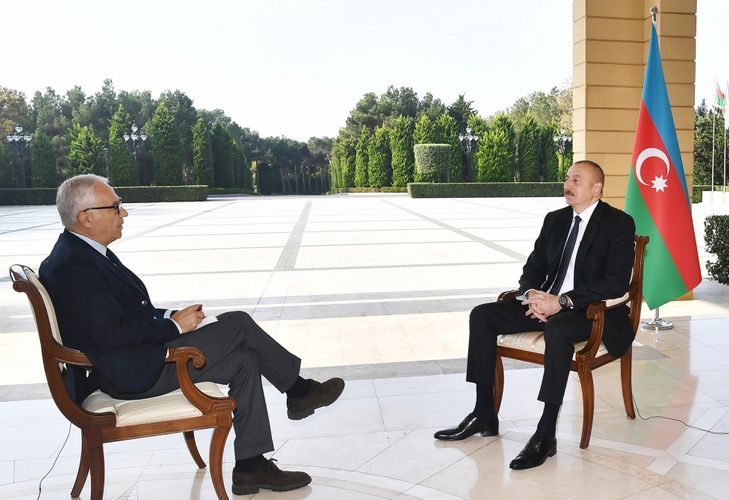 "It is a complete lie. Their whole history is a lie. There is no sign of this. I said that thousands of Armenians live in Azerbaijan. There are no Azerbaijanis living in Armenia or Nagorno-Karabakh," said the President of the Republic of Azerbaijan Ilham Aliyev said in an interview with the Italian newspaper La Republica on November 2, while answering the question of the journalist on “What your response will be to Pashinyan, whom I met three weeks ago? He said he was afraid of a new genocide in Nagorno-Karabakh", APA reports.

The President of Azerbaijan added that 99% of the Armenian population are ethnic Armenians: "Can you find another country in our region where such a nation dominates? This is a mono-republic. Why? Because they have either expelled everyone or other nations cannot live there. Azerbaijan is a multiethnic, multi-religious country. Therefore, it is completely unacceptable to talk about the genocide, and this is another fake that they want to present, as they always do. They always want to present themselves as suffering, always crying, always in need of help. But look at what is happening today. He calls President Putin five times a day, he calls President Macron a little less, but he still calls, he calls everyone. He calls on European leaders. He asks for the recognition of Nagorno-Karabakh but does not understand that the European Union has a common position on the territorial integrity of Azerbaijan. Therefore, he tries to use every fake method to gain some support. So, as I said, this is a complete lie. I am responsible for what I said, the Armenians living in Nagorno-Karabakh can be sure that their security will be ensured."