Azerbaijani ambassador to Italy: “Our problem is not the Armenian community of Nagorno-Karabakh” 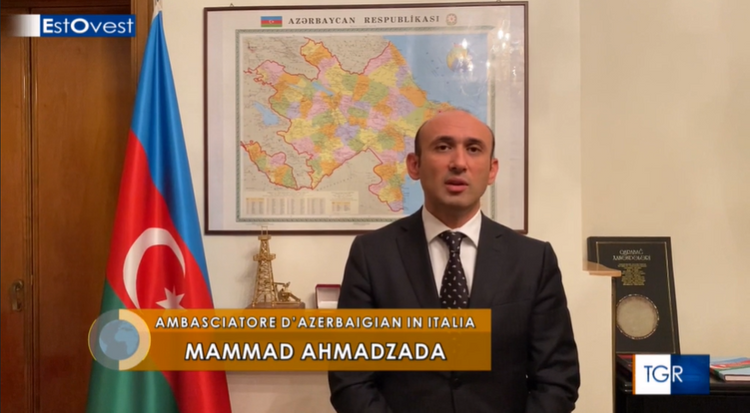 The "EstOvest" section of the news program of the famous Italian TV channel "Rai 1" has aired allegations such as presenting Armenia-Azerbaijan Nagorno-Karabakh conflict on the basis of a religious conflict and calling recent military operations against Armenians were a "genocide" by Italian writer of Armenian origin Antonia Arslan.  A statement made by Azerbaijani Ambassador to Italy Mammad Ahmadzade was included in the same program, Azerbaijani Embassy to Italy told APA.

Azerbaijani diplomat noted that Nagorno-Karabakh is not a religious conflict, it is a territorial conflict arising from Armenia's territorial claims against Azerbaijan: “Armenia occupied  Nagorno-Karabakh and 7 adjacent regions for 30 years which are 20% of Azerbaijan's territory and carried out ethnic cleansing against all Azerbaijanis there. Today, there are more than one million refugees and IDPs in my country,” Mr. Ambassador emphasized.

Noting that Armenia deliberately covered this conflict up with religious attire in order to make the public in the West more sensitive to its interests, Ambassador brought into notice that Azerbaijan is a multicultural country and thousands of people of with Armenian origin also live in Azerbaijan far from the Nagorno-Karabakh, and there is an Armenian church in the center of Baku.

“Our problem is not Nagorno-Karabakh community, our problem is occupant Army of Armenia,” the Ambassador concluded his speech.

The interview is available via the following link: https://www.rainews.it/tgr/rubriche/estovest/