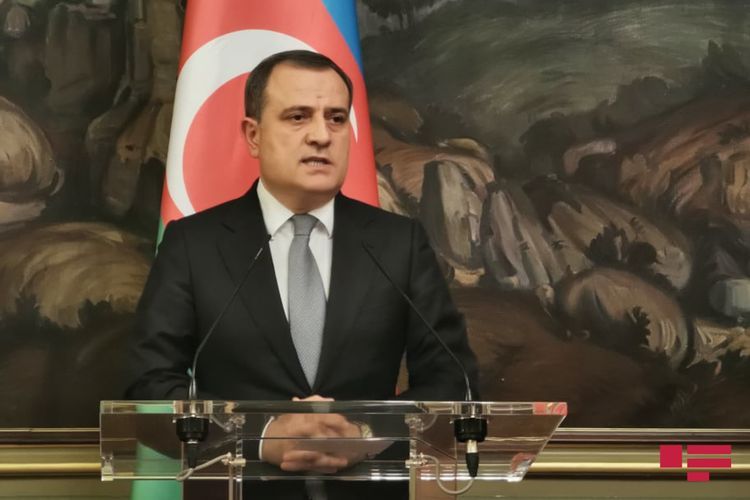 A letter sent by Azerbaijani Foreign Minister Jeyhun Bayramov to UN Secretary-General Antonio Guterres on August 31 on Armenia's aggressive rhetoric and illegal activities in the occupied territories of Azerbaijan has been published as a document of the UN General Assembly and Security Council, Press Service Office of the Ministry of Foreign Affairs of the Republic of Azerbaijan told APA.

"With reference to the letter dated 25 June 2020 from the Minister for Foreign Affairs of the Republic of Azerbaijan addressed to you, through which the Republic of Azerbaijan extended its support for your call for a global ceasefire, I am writing to draw your attention to continued violations by Armenia of the letter and spirit of this call in the context of its inflammatory rhetoric and illegal actions with regar d to the occupied territories of Azerbaijan.

In a blatant violation of the call for a global ceasefire, Armenia resorted to an armed attack against the Republic of Azerbaijan along the Armenia-Azerbaijan State border in the Tovuz direction from 12 to 16 July 2020. My letter of 30 July informed you in detail of the cause, course and consequences of this reckless act of aggression of Armenia against Azerbaijan.

Having failed on the battlefield to realize political and military objectives that it pursued with the attack in the direction of Tovuz, Armenia sustains its aggression with extremely provocative statements. The latest statements by Armenia threatening to strike the city of Ganja, the second largest settlement of Azerbaijan, as well as critical civilian infrastructure, such as the Mingachevir hydroelectric power station, are clear testimony that Armenia remains stuck to its policy of terrorizing the civilian Azerbaijani population in a blatant violation of international humanitarian law. Armenia’s policy of changing a demographic feature of the occupied territories of Azerbaijan gained new momentum in the light of the horrific explosion that hit the city of Beirut, Lebanon, on 4 August.

The tragedy, apparently, is seen by Armenia as an opportunity to accelerate the already ongoing plan of implanting Lebanese-Armenians in the occupied territories of Azerbaijan. It has already started the transfer of Armenian families. Like many ethnic Armenians from abroad, in particular those from Syria, Iraq and Lebanon initially transferred to Armenia under benign humanitarian slogans and then diverted to the occupied territories of Azerbaijan, these families will also be finally abused for the purpose of the illegal settlement policy of Armenia. Moreover, the puppet regime established by Armenia in the occupied territories recently announced the intention to move certain so-called “residences” from Khankendi to Shusha.

This reckless plan of Armenia is aimed at consolidating the results of its notorious ethnic cleansing policy and clearly demonstrates its disrespect for the essence of peaceful efforts under the auspices of the Minsk Group of the Organization for Security and Cooperation in Europe (OSCE). I feel compelled to remind you that the issue of Shusha holds a special place in the context of the settlement of the Armenia-Azerbaijan conflict due to its exceptional historical, cultural and moral significance for the people of Azerbaijan. Accordingly, the safe and dignified return of all members of the expelled Azerbaijani population to their places of origin in the occupied territories, including the city of Shusha, is a red line in the negotiation process.

Therefore, this extremely dangerous plan of Armenia, if not reversed, would inevitably lead to serious consequences for the entire peace process. Armenia’s illegal and malicious activities with regard to the Sarsang water reservoir in the occupied territories continue to be a source of serious concern due to multiple accounts. These illegal activities represent a permanent change to the infrastructure of these territories and the illegal exploitation of the natural resources of the Republic of Azerbaijan, as well as interference with public and private property A/74/1003 S/2020/872 20-11384 3/3 rights.

Moreover, exploitation of the reservoir by Armenia as a tool of environmental terror has already deprived Azerbaijani civilians of water resources and led to serious environmental degradation of lands, including soil erosion, affecting biodiversity and productivity in residential areas along the occupation line. Further interference with the infrastructure of the reservoir cannot but aggravate these environmental challenges. This illegal attempt, like other infrastructural changes, such as building a new road connecting Armenia and the occupied territories of Azerbaijan, should also be seen in the context of Armenia’s policy of illegal settlement and maintenance of occupation, as it is clearly aimed at providing additional incentives for attracting more ethnic Armenians to settle in the occupied territories.

The above-mentioned takes place in the context of the declared State policy of Armenia to consolidate the results of the use of force against Azerbaijan. Numerous statements by the senior officials of Armenia to that effect have now found its reflection in its recently unveiled national security strategy, according to which the strategic goal of Armenia in the negotiation process is to “safeguard the outcomes of the war”. This provides further testimony that Armenia is abusing the negotiation process being conducted under the aegis of the OSCE Minsk Group to pursue a policy of annexation of the internationally recognized territories of Azerbaijan.

It is within this context that I renew my appeal to you to take all necessary effective measures to persuade Armenia to refrain from provocative bellicose rhetoric; cease its activities aimed at changing the physical, cultural and demographic character of the occupied territories; and comply with its obligations under international law through withdrawing its forces from all occupied territories of Azerbaijan. I count on your support in this matter."

You may find the document through the following link: https://undocs.org/a/74/1003