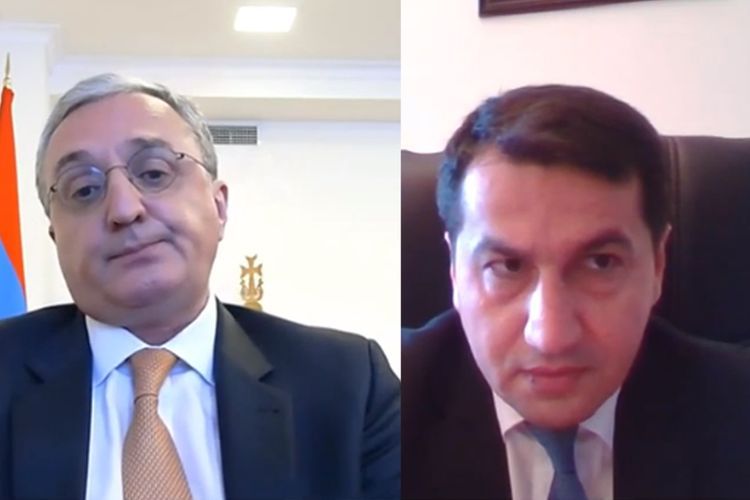 The Armenian Foreign Minister tried to distort the essence of the Armenia-Azerbaijan conflict, claiming that Armenia was allegedly a supporter of peace, that his country was working towards preventing the emerging tensions and was the guarantor of the security of Armenians in Karabakh.

He stressed that Armenia had occupied the Nagorno-Karabakh region and adjacent seven districts of Azerbaijan through aggression, as a result of which over a million Azerbaijanis living in these territories were subjected to ethnic cleansing and were expelled from their homes. He added that Armenia as a state bears international legal responsibility for military aggression against Azerbaijan.

Hikmat Hajiyev asked the Armenian FM what Armenian soldiers were doing in the occupied territories of Azerbaijan.

The Assistant to President stressed that the events that took place on the Azerbaijani-Armenian border were not a simple border clash, this provocation was carefully planned by the Armenian side and was a continuation of its military aggression against Azerbaijan. Hajiyev said that this provocation was connected with the following reasons.

- Thus, Armenia wants to avoid the Armenia-Azerbaijan conflict and responsibility for this conflict;

- By this provocation, Armenia wants to create a new hotbed of tension in the region and exposes the region to new threats;

- By striving to involve the Collective Security Treaty Organization in the conflict, Armenia is trying to play a dirty and irresponsible political game;

- Armenia aims to damage the East-West transport corridor, regional transport projects by which was sidelined;

- Also, the Armenian leadership is trying to divert attention from the acute socioeconomic problems observed in the context of the widespread COVID-19 pandemic in the country.

Hikmat Hajiyev said that by making a statement that “Karabakh is Armenia, period”, the Armenian leadership clearly demonstrates the policy of annexation of a part of the territories of Azerbaijan, stressing that with such statements Armenia undermines the format and the very essence of the negotiations mediated by the OSCE Minsk Group co-chairs. He noted that, first of all, this is disrespect for co-chair countries.

He stressed that the entire responsibility for the provocation at the border lies squarely with Armenia. Armenia is concealing its losses and the leadership of this country will have to report to its public on the real losses as a result of this military adventure.