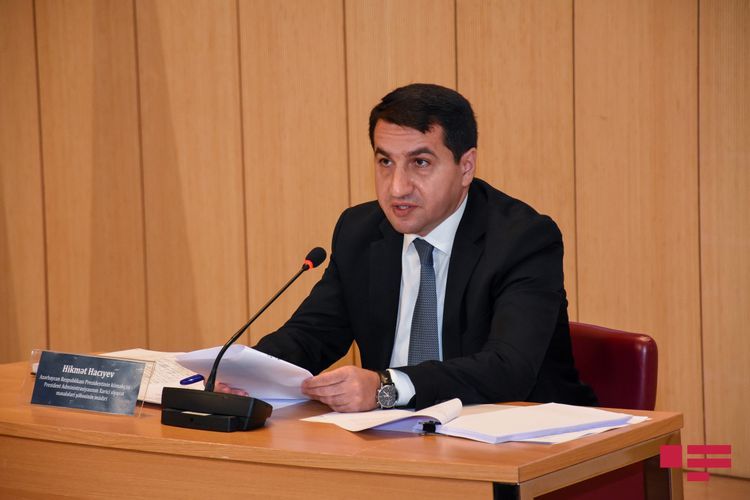 “Armenian Prime Minister’s statement that “there is no diplomatic solution of the conflict” once again demonstrates that Armenia completely is not interested in the solution of the conflict through negotiations, said Assistant of the President of the Republic of Azerbaijan, Head of Foreign Policy Affairs Department of the Presidential Administration Hikmat Hajiyev, APA reports.

According to him, Armenian leadership with this statement confess that Armenia’s purpose is to keep the occupied Azerbaijani territories under occupation: “Thus, it is again confirmed that the statement of the official Yerevan on the solution of the conflict through negotiations, is nothing but hypocrisy.

Armenia’s prime minister irresponsibly and for the sake of his own political ambitions calls on all civilian authorities, civilian people for total armament and inveigles them into military operations. This official stance of Armenia proves who violated the humanitarian ceasefire regime and serves for further escalation of situation in the region.

In fact, the making of such a statement by the person who gives order to constantly inflict fire on Azerbaijan’s Ganja city by ballistic rockets of SCUD type, and to shell residents of other cities and regions by rockets and artillery missiles shouldn’t cause surprise. This statement of Armenia’s prime minister coincides with the time immediately after the working visit of ministers of foreign affairs of the two countries to Moscow by Russia’s initiative and prior to the meeting that will be held in Washington by the US’ initiative at the level of ministers of foreign affairs.

President Ilham Aliyev has repeatedly stated Azerbaijan’s readiness for negotiations and diplomatic solution of the conflict in his last interviews and statements given to international media.

On the backdrop of Azerbaijan’s constructive position regarding the solution of the conflict, the international community, especially co-chair countries of the OSCE Minsk Group should derive a conclusion from this statement of Armenia’s leadership. This statement of Armenia’s leadership is at the same time a disrespect to the steps taken by the international community in the area of diplomatic solution of the conflict.

The Republic of Azerbaijan supports the solution of the conflict through negotiations in accordance with the existing road map based on resolutions of the UN Security Council”.