Hikmet Hajiyev: “They cowardly flee from battlefield and take such uncourageous steps against civilians” 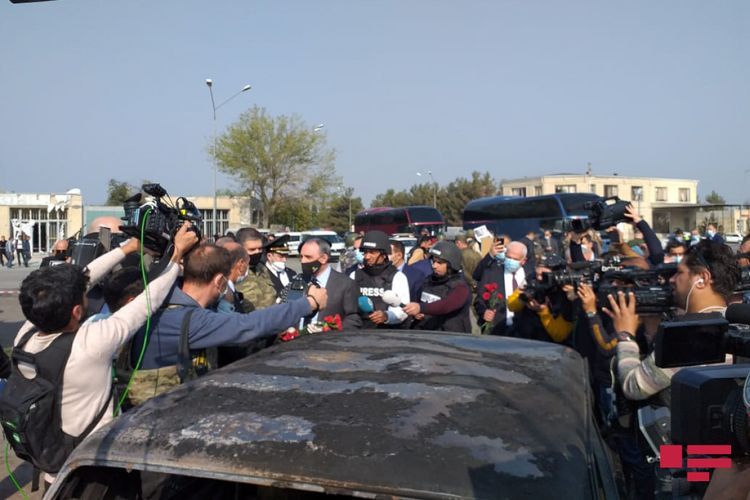 “21 persons were killed, about 70 people were injured as a result of an attack on Barda city yesterday. It is a war crime, a military crime”, Assistant of the President of the Republic of Azerbaijan, Head of Foreign Policy Affairs Department of the Presidential Administration Hikmet Hajiyev told local and foreign media reporters during a visit to territories of Barda city, destroyed as a result of Armenians’ rocket fires to the city yesterday, with representatives of diplomatic corps, APA reports.

He said that Armenian political-military leadership does it deliberately and purposefully: "If they have enough courage, they would participate in real military operations on the battlefield. They fear and run away from the battlefield and implement such coward steps against civilians. We by being present here and via your solidarity once again deliver these crimes to the international community so that the whole world would see Armenia’s real essence, this feature of Armenia’s political and military leadership. It should be seen by the whole world so that it would be clear what a great cleft is there between the civilized world and Armenia and the attack of Barda City is a bright example of this. As you see, there is no military facility here. Their purpose was to target civilians in the afternoon hours and to commit a massacre. The General Prosecutor of the Republic of Azerbaijan also participates in our current visit, the head of Barda City Executive Power is also here. We will bring to the notice the occurred event directly via visual proofs. Also, we will head to Terter city from here. We don’t fear, they open fire, and today as well, we once again demonstrate to them our courage, our solidarity with our people so that to show we are in Barda today in front of the eye of the international community, and later on, we will head to Terter city, we will deliver truths to the notice of the international community.