Supreme Commander-in-Chief: "What happened to your warlike army? It has been crushed, we have crushed it, we have destroyed it" 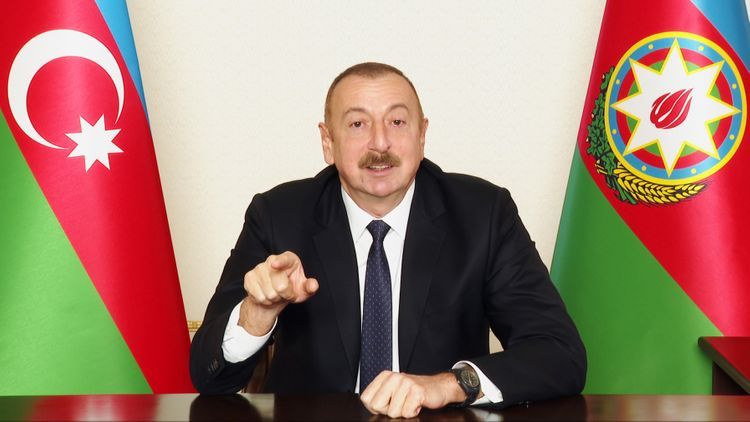 "The liberation of Aghdam was possible as a result of the glorious military victory. If Azerbaijan had not defeated Armenia on the battlefield, Armenia would not have left our lands of its own free will", said President of the Republic of Azerbaijan Ilham Aliyev in his address to the nation on the occasion of liberation of Aghdam, APA reports.

"There are many reasons for this. First of all, because of the fortifications they had built in those regions, in the occupied territories. A lot of money was invested there. Those fortifications were intended to prevent the Azerbaijani Army from passing through them. But they were wrong again. They could not calculate our strength correctly. They did not know what the Azerbaijani Army and Azerbaijani citizens were capable of doing. They did not know that it was our strength, equipment and morale that led us to that Victory. They did not know that the people of Azerbaijan have been living with the desire to return to their ancestral lands for all these years. All these and other factors paved the way for our Victory.

Therefore, by building these fortifications and taking other steps, they pursued the goal of perpetuating this occupation. Otherwise, they would not have changed the names of our historical cities and villages. Aghdam was given an ugly name, Fuzuli was given another ugly name. They drew up new maps, in which the so-called “Nagorno-Karabakh republic” covered not only the former Nagorno-Karabakh autonomous region but also all the occupied territories, and they presented this to the international community.

I have repeatedly told the mediators dealing with this issue to pay attention to that. You are talking about a peaceful solution to this issue but we see the exact opposite. We see that the heritage of Azerbaijan is being erased in these lands, Azerbaijani monuments and historical sites are being Armenianized, Azerbaijani mosques are being destroyed, all our historical and cultural heritage is being erased, new maps are being drawn up. When maps of the so-called “Nagorno-Karabakh republic” are published in textbooks prepared for Armenian schools, all the lands occupied are attributed to this self-styled entity. Books and booklets published by Armenia in foreign languages cover all the occupied territories and the so-called entity. They do the same when illegally participating in international exhibitions. Okay, but what next? You are saying that the issue will be resolved peacefully.

What happened to these maps now? These maps have gone to hell, these maps no longer exist. The occupiers vacating Kalbajar district are destroying all houses, buildings, schools, and showing their savagery yet again. All leading international media outlets have filmed this and spread these images around the world, embarrassing them. They are putting themselves to disgrace. They cowardly ran away from us. They could not stand in front of us. Those who call themselves an invincible army, a warlike people – what happened to your warlike army? Where is it? It has been crushed, we have crushed it, we have destroyed it. There is no Armenian army. We have destroyed it. Our victory on the battlefield also preconditioned our political victory. Aghdam district returns to us without firing a single shot or killing a single person. This is our great political success. But this would not have been possible without the military victory", noted head of state.