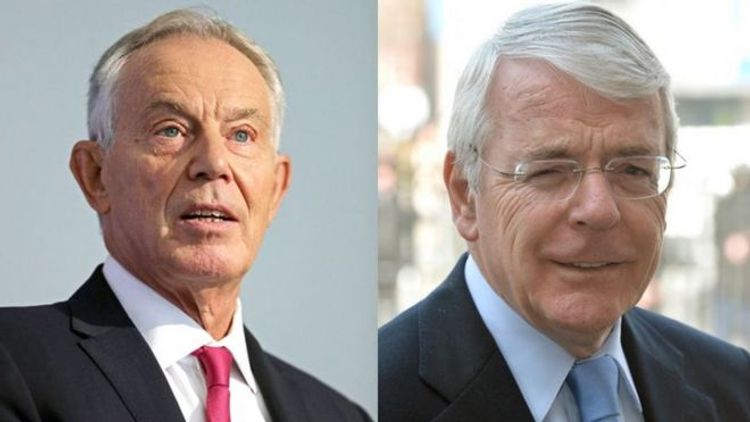 The PM has said the European Union is threatening to impose a customs border in the Irish Sea, separating Northern Ireland from the rest of the UK.

Mr Blair and Sir John have accused the government of "embarrassing" the UK.

The Internal Market Bill will be debated in the Commons on Monday.

The bill would go against the Withdrawal Agreement signed by the UK and EU.

It addresses the Northern Ireland Protocol - the part of the Brexit Withdrawal Agreement designed to prevent a hard border returning to the island of Ireland.

If the bill becomes law it would give UK ministers powers to modify or "disapply" rules relating to the movement of goods between Britain and Northern Ireland that will come into force from 1 January, if the UK and EU are unable to strike a trade deal.

Writing in The Sunday Times, Sir John and Mr Blair - former Conservative and Labour prime ministers respectively - said the government's actions were "irresponsible, wrong in principle and dangerous in practice".

"It raises questions that go far beyond the impact on Ireland, the peace process and negotiations for a trade deal - crucial though they are. It questions the very integrity of our nation," they said.

The former leaders said that respecting treaty obligations was "just as important" as domestic law, and called for MPs to reject the legislation.

"As the world looks on aghast at the UK - the word of which was once accepted as inviolable - this government's action is shaming itself and embarrassing our nation," they added.