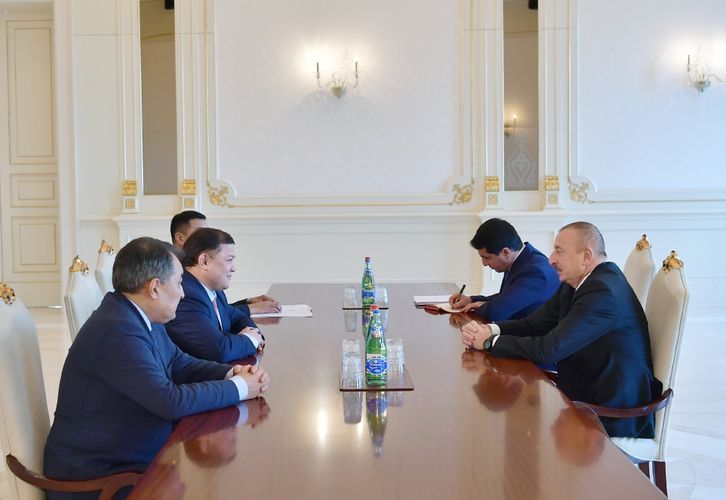 President of the Republic of Azerbaijan Ilham Aliyev has received Chairman of the Jogorku Kenesh, Parliament of the Kyrgyz Republic, Dastanbek Djumabekov, APA reports.

Chairman of the Jogorku Kenesh Dastanbek Djumabekov extended President of the Kyrgyz Republic Sooronbay Jeenbekov`s greetings to the head of state.

President Ilham Aliyev thanked for Sooronbay Jeenbekov`s greetings, and asked Dastanbek Djumabekov to extend his greetings to the Kyrgyz President.

The sides hailed the successful organization of the 7th Summit of the Cooperation Council of the Turkic-Speaking States in Baku this October. They recalled the participation of President Sooronbay Jeenbekov in this event and his meeting with President Ilham Aliyev. It was underlined that during the meeting the sides discussed issues of cooperation between the two countries in political, economic, humanitarian and other areas. They expressed confidence that Azerbaijan would successfully host the 9th Plenary Session of TURKPA.

It was noted that the two countries` peoples shared common roots and culture, and the importance of cooperation within the Turkic Council and the Parliamentary Assembly of Turkic Speaking countries was stressed.

The sides exchanged views on cooperation between the two countries in international organizations, establishment of direct air links between Baku and Bishkek and cooperation in tourism, cultural and other spheres.

The President of the Republic of Azerbaijan Ilham Aliyev has today received Dastanbek Djumabekov, Chairman of the Jogorku Kenesh (Parliament) of the Kyrgyz Republic, APA reports citing the Presidential press service.