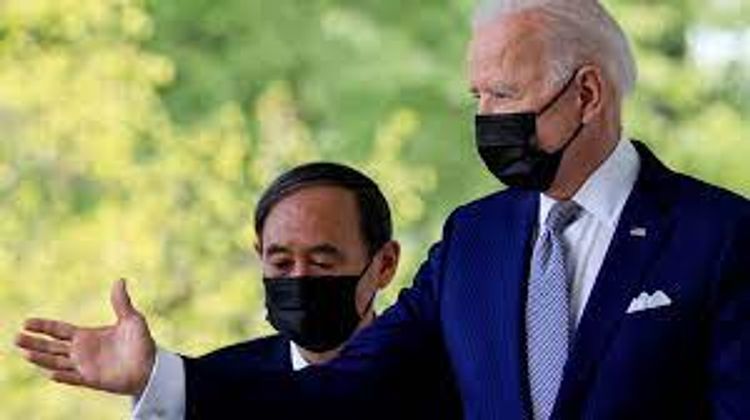 The talks offered the Democratic president, inaugurated in January, a chance to work further on his pledge to revitalize U.S. alliances that frayed under his Republican predecessor Donald Trump.

China topped the agenda, underscoring Japan’s central role in U.S. efforts to face down Beijing. The two leaders addressed an array of geopolitical issues, including Taiwan, with Suga saying they reaffirmed “the importance of peace and stability of the Taiwan Strait,” a slap at Beijing’s increased military pressure on the Chinese-claimed, self-ruled island.

“Today Prime Minister Suga and I affirmed our ironclad support for the U.S.-Japanese alliance and for our shared security,” Biden told a joint news conference in the White House Rose Garden, calling the discussions “productive.”

“We committed to working together to take on the challenges from China and on issues like the East China Sea, the South China Sea, as well as North Korea, to ensure a future of a free and open Indo Pacific.”

Other pressing concerns at the talks included China’s increased military movements near Taiwan, its tightening grip on Hong Kong and its crackdown on Muslim Uighurs in Xinjiang.

Suga said he and Biden agreed on the necessity of frank discussions with China in the context of Beijing’s activities in the Indo-Pacific region.

The summit - Biden’s first in-person meeting with a foreign leader as president - came just days after China sent 25 aircraft, including fighters and nuclear-capable bombers, near Taiwan, which Beijing considers a wayward province.

“I refrain from mentioning details, since it pertains to diplomatic exchanges, but there is already an agreed recognition over the importance of peace and stability of the Taiwan Strait between Japan and the United States, which was reaffirmed on this occasion,” Suga said.

In a joint statement, the leaders said they underscored “the importance of peace and stability across the Taiwan Strait and encourage the peaceful resolution of cross-Strait issues”, similar phrasing used by the foreign and defense ministers of both countries following a meeting last month.

It was the first such reference to the issue in a U.S.-Japan leaders’ statement since 1969, before Tokyo normalized ties with Beijing. Attention had been focused on wording on the topic, given caution in Tokyo about the need to balance its security concerns with Japan’s deep economic ties with China.