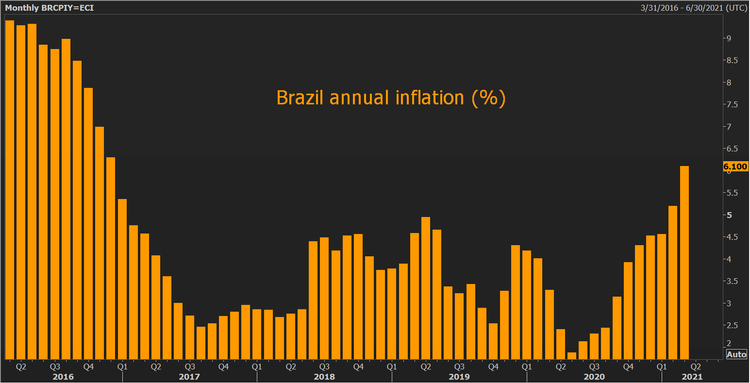 Annual inflation in Brazil rose above 6% in March for the first time in more than four years, official figures showed on Friday, as spiking fuel and energy prices lifted overall inflation even further above the central bank’s year-end target, APA reports citing Reuters.

The annual rate of consumer inflation rose to 6.10% from 5.20% in February, statistics agency IBGE said, slightly below the 6.20% median forecast in a Reuters poll of economists but the highest since December 2016.

The central bank’s year-end goal is 3.75%, with a 1.5 percentage point margin of error on either side. These figures show inflation is well above even the 5.25% upper limit of that range.

While energy price spikes may be transitory, policymakers will not want inflation expectations to become unanchored.

“The central bank is clearly worried by above-target inflation and another 75bp hike in the Selic rate to 3.50% at the next meeting in May looks likely,” said William Jackson, chief emerging market economist at Capital Economics.

The central bank last month delivered its first increase in borrowing costs since 2015, raising the Selic rate by 75 basis points to 2.75%.

Central bank chief Roberto Campos Neto said this week that the bank’s “partial normalization” of monetary policy will continue unless it sees signs of inflation and inflation expectations rising significantly.