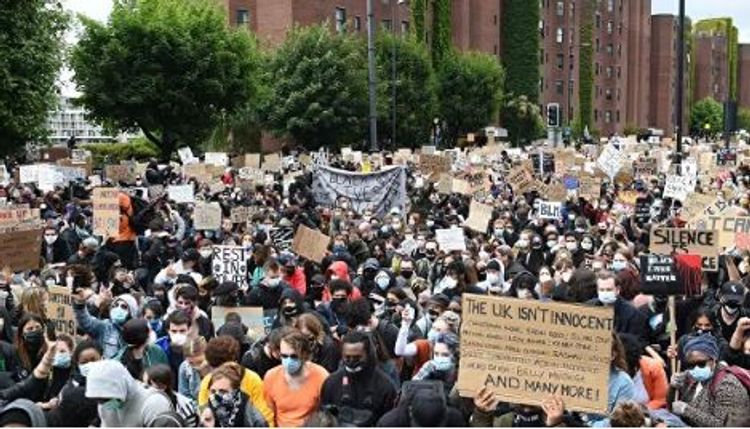 Ms Patel said that 135 protesters had been arrested and 35 police officers injured during protests.

Mostly peaceful protests took place in cities across the UK over the weekend, but a small number of rallies saw clashes between campaigners and police.

Ms Patel, making a statement to MPs, said any large gatherings of people are "currently unlawful" before adding: "We cannot afford to forget we're still in the grip of an unprecedented national health emergency that has tragically claimed more than 40,000 lives.

"So the severe public health risk forces me to continue to urge the public not to attend future protests.

"The Government's scientific and medically-led advice remains clear and consistent - no matter how important the cause, protesting in large numbers at this exceptional time is illegal and doing so puts everyone's lives at risk."

But MP's clashed over the Government's response to the protesters.

Ms Patel rejected the claim and spoke about her own experience of racism.

"A different Home Secretary recently characterised, if madame deputy speaker I can say so, in the Guardian newspaper as a fat cow with a ring through its nose - something that was not only racist but offensive, both culturally and religiously."

He said: "We cannot allow this moment of global demand for justice to pass without action and we on these benches will be at the forefront of calls for change.

"What is never the solution, though, is violence and vandalism.

"The vast majority of protesters are peaceful, but some of the actions we have seen from a minority are unacceptable.

"I condemn those who have attacked the police and I want to pay tribute to the police officers putting themselves in harm’s way over the weekend."

She said: "As the ugly tally of officer assaults show, some protesters regrettably turned to violence and abusive behaviour at the weekend. This hooliganism is utterly indefensible.

"There is no justification for it."

Ms Patel linked those who tore down a statue of a slave owner in Bristol with those who had attacked police officers, describing them both as a "mob".

She said: "The criminals responsible for these unlawful and reckless acts are betraying the very cause they purport to serve.

"These protests are about injustice but by attacking our courageous police, they are acting in a wholly unjust way."