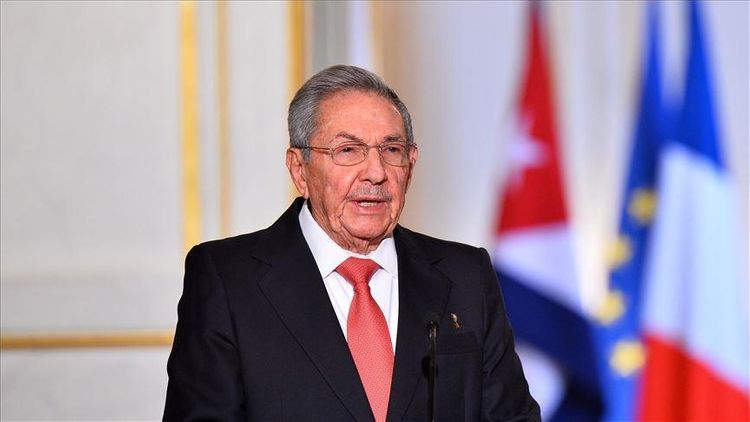 Raul Castro announced on Friday that he is stepping down as First Secretary of the Communist Party (PCC), APA reports quoting Anadolu Agency.

"My task as first secretary of the Central Committee of the PCC concludes with the satisfaction of having fulfilled [my mission] and confidence in the future of the fatherland," Castro said during the VIII Congress of the party.

The retirement of Castro, who is about to turn 90, marks the end of the Castro era on the island after Fidel Castro’s death in 2016.

"I fervently believe in the strength and value of the example and understanding of my compatriots, and as long as I live I will be ready to defend the fatherland, the revolution and socialism."

Castro said he had faith in the new generation that is “full of passion and anti-imperialist spirit.”

He is expected to be replaced by Miguel Diaz-Canel who took over as president in 2018.

"Dreaming and continuing a country," Diaz-Canel said on Twitter. It is "the congress of continuity," he added, noting that the socialist model that was implemented will not be changed.​​​​​​​

The meeting comes amid a surge in the coronavirus pandemic and the tightening of a US decades-old trade embargo on Cuba, which has plunged the nation of 11 million into a brutal economic crisis.

The economy on the island shrank 11% in 2020 and many Cubans spend hours in food and medicine lines while the country faces its worst outbreak of the virus since the beginning of the pandemic, which has infected more than 90,000 people and killed 500.

Diaz-Canel has been pushing drastic economic reforms since January, including establishing a single currency for residents and foreigners.

Along with Castro, other names from the generation of the 1959 revolution are retiring, including the Communist Party's number two, Jose Ramon Machado Ventura.

The Communist Party of Cuba inaugurated on Friday a historic four-day Congress, during which the Caribbean island will see the last of the Castro brothers leave the political scene, APA reports quoting Anadolu Agency.

Six decades after the government headed by Fidel and Raul Castro was installed following the leftist 1959 revolution, 89-year-old Raul has indicated that he will step down as First Secretary of the Communist Party, Cuba's most powerful position.

Fidel Castro’s younger brother announced in 2016 that he would retire at the party's eighth congress and give the reins to new generations of revolutionaries led by Miguel Diaz-Canel, who took over as Cuba's president in 2018.

Castro is expected to cede the post to Diaz-Canel, whose presidency has represented continuity of the socialist model.

The succession coincides with the 60th anniversary of the failed military assault at the Bay of Pigs by anti-Castro paramilitaries trained and financed by the CIA in 1961.

In addition to the generational changeover, the agenda of the Congress that comes together under the banner “continuity and unity,” will focus on analyzing the results of the economic reforms implemented a decade ago and other social changes included recently like increased internet access.

The meeting will take place amid a surge in the pandemic and the tightening of the US decades-old trade embargo on Cuba, which has plunged the nation of 11 million into a brutal economic crisis.

Its economy shrank 11% in 2020 and many Cubans spend hours in food and medicine lines while the country faces its worst outbreak of COVID-19 since the beginning of the pandemic, which has infected more than 90,000 people and killed 500.

Under the former President Donald Trump administration, the US tightened restrictions on Americans’ travel to Cuba and goods from the island nation. Although current President Joe Biden promised to ease restrictions, so far he has not dealt with the island.