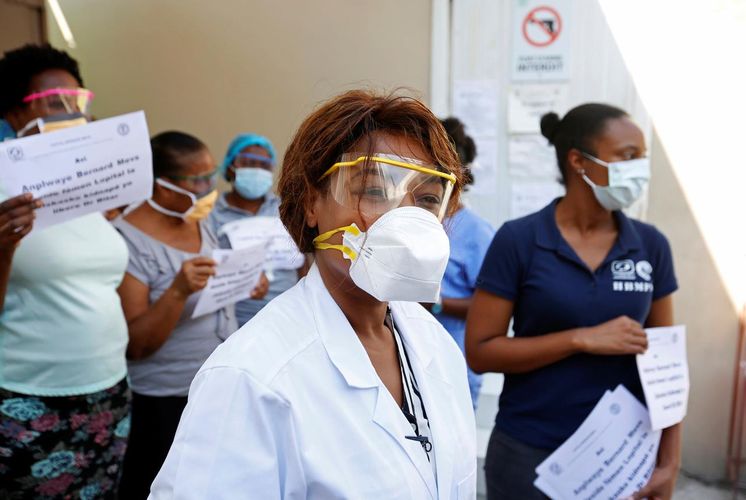 The director of one of Haiti’s top hospitals was kidnapped on Friday, prompting staff to refuse to take in new patients in protest as the impoverished country battles an outbreak of the novel coronavirus amid a spike in gang violence, APA reports citing Reuters.

Dr. Jerry Bitar, a surgeon, was kidnapped shortly after leaving for work at Hospital Bernard Mevs from his home in an upmarket neighborhood of the capital, hospital staff told Reuters.

Kidnappings for ransom have sharply increased this year amid a political and economic crisis in Haiti, which according to the World Bank is the poorest country in the Western Hemisphere. Police confirmed 15 kidnapping cases in January alone. Gangs appear to strike indiscriminately, with victims ranging from Haitian schoolchildren, lawmakers and businessmen to foreign aid workers.

A crowd gathered outside the facility in solidarity with Bitar, who runs the hospital together with his twin brother, while staff chanted in unison calls for his release. Haitian media outlets also pleaded for bandits to free Bitar.

“In the face of the coronavirus pandemic, it is abnormal to take the hospital’s doctor,” said Jean Wilguens Charles, a local resident whose friends have received treatment at the hospital. “We demand his liberation without conditions.”

Medical assistant Claude Devil said the hospital usually attended all Haitians, including those who had no money to pay for services, but would not take in new patients while still attempting to look after existing ones as best possible.

“There are several patients waiting to be operated but we cannot work without the doctors’ order,” he said.

The relevant authorities are following the case, a Health Ministry spokesman said.

The Bernard Mevs hospital is a trauma and critical care center and is not treating coronavirus cases currently, but could need to if the disease spreads substantially in the country, where healthcare services and sanitation infrastructure are inadequate.

According to a 2019 study by the Research and Education consortium for Acute Care in Haiti (REACH), Haiti has only 64 ventilators for a population of around 11 million, which makes it especially vulnerable to an outbreak of the highly contagious coronavirus, which causes the respiratory illness COVID-19.

“This is a serious concern, especially given the relatively high proportion of the population considered to be at an elevated risk,” the Center for Economic and Policy Research wrote in a paper published on Friday, co-authored by its analysts Jake Johnston and Kira Paulemon.

Haitian authorities have so far confirmed eight cases of the coronavirus. President Jovenel Moise last week declared a state of emergency, ordering schools, factories, and places of worship shut to prevent the spread of the virus, closing the country’s borders to people and imposing a curfew.

But the streets continue to buzz as many in the country, where more than half the population lives under the poverty line, ignore recommendations to stay at home or practice social distancing. Many do not have access to sources of news.

Even with the best intentions, tricky access to clean water makes it difficult for Haitians to frequently wash their hands, the hygiene mantra that health experts are preaching as a top defense against the spread of the coronavirus.