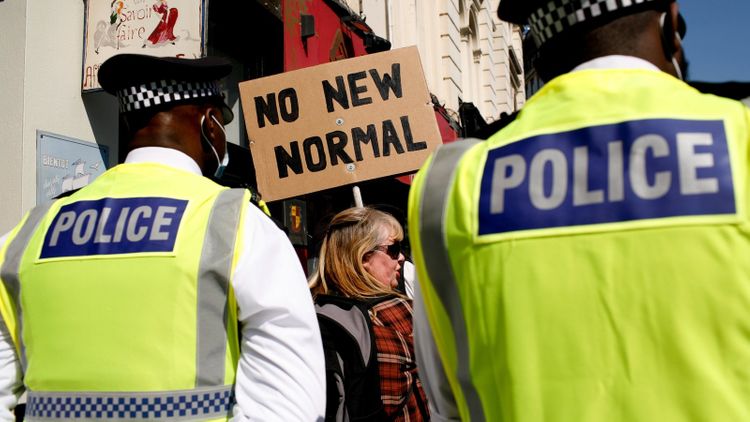 Demonstrators hurled bottles as officers attempted to disperse the crowds in Hyde Park on Saturday evening, the London-based newspaper quoted the Metropolitan Police as saying.

Photographs posted on social media showed a female police officer bleeding from a cut to her head, while another suffered a similar wound on his forehead, the newspaper said.

Two officers were taken to hospital, although their injuries are not believed to be serious, the police said.

Five people were arrested for offences including assault on police and remain in custody, the police said.

The demonstrators refused to observe any social distancing rules and many people stood shoulder to shoulder, according to the newspaper.

Organisers had urged participants to "make as much noise as possible" during the rally but to "avoid making a crowd", the newspaper said.

However, they also encouraged people to "link arms if the police tried to intervene", said the newspaper.

The demonstrators were challenging lockdown measures, despite many being lifted earlier this month.

Shoppers flocked to high streets and drinkers downed pints as coronavirus restrictions were further lifted in England on April 12.

The British government's four-step plan is expected to see all legal restrictions in England being removed by mid-June.

Experts have warned that despite progress in vaccine rollout, Britain is "still not out of the woods" amid concerns over new variants, particularly those first emerged in South Africa, Brazil and India, and the third wave of pandemic on the European continent.