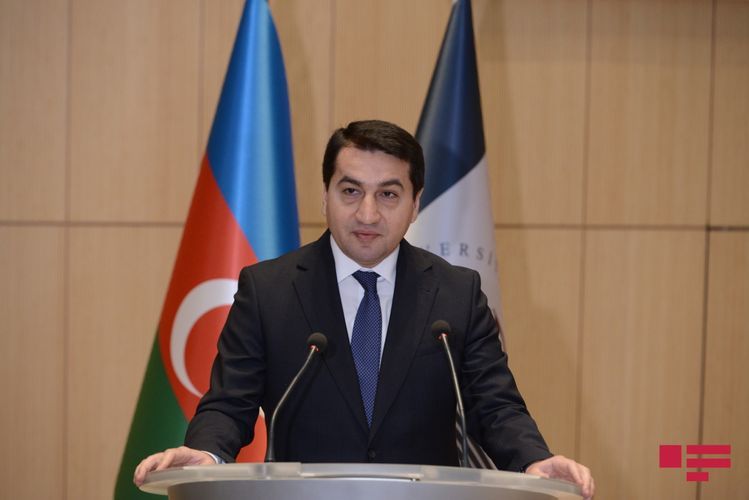 “20 January should be viewed as an event which started from Sumgait events and continued in Khojaly,” Hikmet Hajiyev, Assistant to the President - Head of the Department for Foreign Policy Affairs of Azerbaijan’s Presidential Administration stated at the event held in ADA University held in remembrance of the 30th anniversary of 20 January Tragedy, APA reports.

H. Hajiyev said the ethnic cleansing was being committed against Azerbaijanis residing on territory of Armenia, and the process was also going on in Nagorno Garabagh: “These processes were implemented just after removal of Heydar Aliyev from Soviet leadership. The 20th January incident should also be considered from military point of view. A plan of occupation of Baku as an alien city had been developed. The tank forces and other military units were used, only artillery was missing. The purpose was to massively kill people in the streets. Moreover, this process was implemented under information blockade circumstances. The foreign journalists were accredited in Moscow and were not allowed to come to Baku. As a result of self-sacrifice of a very little number of journalists and thanks to attendance of Azerbaijani representation in Moscow by Heydar Aliyev and the press conference held there by Heydar Aliyev, a different portrayal of the situation was formed in the international media afterwards. It was noted in the international media that a tragedy had been committed in Baku. And on October 15 of the same year Mikhail Gorbachov was awarded with Nobel Peace Prize. It is still not late to take away the Nobel Peace Prize from Gorbachov”.

Note that Nobel award on peace field is presented by a committee consisting of 5 members elected by the Norwegian parliament. (Storting)